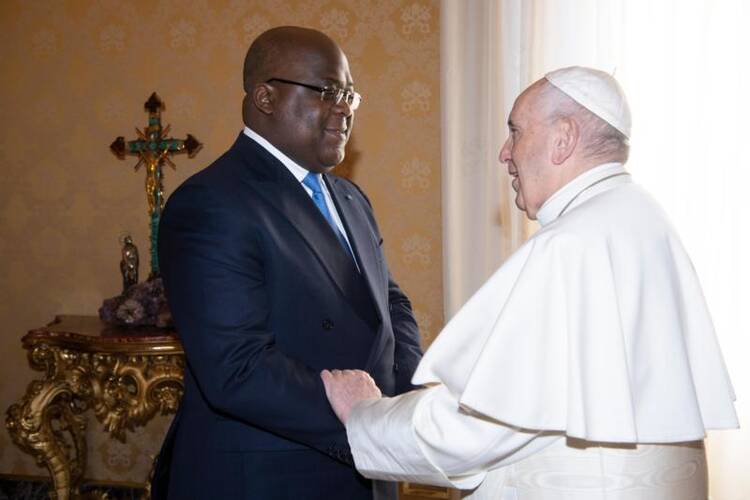 Pope Francis received the president of the Democratic Republic of the Congo, Félix Antoine Tshilombo Tshisekedi, in a private audience on Jan. 17 and discussed the current situation in this conflict-ridden, mineral-rich country and, in particular, the “persistent armed conflict and the spread of the Ebola virus” in the eastern provinces, the Vatican said in a statement.

The two spoke in the private library of the Vatican’s apostolic palace with the aid of a translator. Afterward, the president presented his wife, Denise Nyakéru Tshisekedi, and a high-level delegation to the pope. During an exchange of gifts, the president gave Pope Francis a painting from the North Kivu region, which is highly affected by the violence caused by militias fighting for control of its rich natural resources. The pope gave Mr. Tshisekedi an engraving of an angel of peace, as well as his message for this year’s World Day of Peace.

As the president bade the pope farewell, Mr. Tshisekedi invited him to visit the D.R.C. “I hope so,” Francis replied with a smile.

It was their second meeting. They met briefly in St. Peter’s Basilica last October when Pope Francis gave the cardinal’s red hat to Friedolin Ambongo Besungu, the archbishop of Kinshasa. Mr. Tshisekedi came for the consistory together with a high-level government delegation in recognition of the major contribution the Catholic Church has made in recent decades to the democratic process in this land of 87 million people, some 50 percent of whom are Catholic.

Earlier this week, before coming to the Vatican, the president had a private meeting with the Cardinal Ambongo in Kinshasa. The cardinal had just returned from North Kivu and told the president he had encountered a people “traumatized by conflict” and in urgent need of protection by the government. The president promised to counteract what he called “the negative forces” in the region.

After his meeting with Pope Francis, the president, accompanied by the country’s foreign minister, Marie Tumba Nzeza, and other government officials, held talks with Cardinal Pietro Parolin, the Vatican’s secretary of state, and Archbishop Paul Gallagher, the secretary for relations with states.

In a statement issued after the visit, the Vatican revealed that the pope and president discussed “the good existing bilateral relations” between the Holy See and the Democratic Republic of the Congo and expressed “satisfaction” at the ratification of the framework agreement between the two countries on matters of mutual interest.

Afterward, the president and Cardinal Parolin exchanged the instruments of ratification of the agreement that was signed on May 20, 2016. The agreement established the juridical framework for reciprocal relations between the two sides.

In a statement issued after the visit, the Vatican revealed that the pope and president discussed “the good existing bilateral relations” between the Holy See and the Democratic Republic of the Congo

It recognized the freedom of the church in pastoral activity and, among other things, set out rules governing Catholic educational institutions, the teaching of religion in schools, the church’s charitable and assistance work, pastoral care in the armed forces, prisons and hospitals, the patrimonial and tax regime and the granting of visas for religious personnel to enter and work in the country.

The Vatican statement said the Congolese president, Pope Francis and the senior Vatican officials also spoke about “the contribution of the Catholic Church” to the democratic process in the country and in the promotion of “the common good and integral development of the nation, especially in the fields of education and health care.”

The Catholic Church has numerous schools and other educational institutes as well as hospitals and health care centers across the D.R.C., the second largest country in Africa—a quarter of the size of the United States.

In their respective conversations, the pope, the president and senior Vatican officials discussed “the country’s current situation, with particular reference to the sufferings of the population in the eastern provinces, due to persistent armed conflict and the spread of the Ebola virus.”

They also spoke about the urgent need for “collaboration and cooperation at national and international level, to protect human dignity and to promote civil coexistence, starting from the many refugees and displaced persons who are facing a grave humanitarian crisis.”

The Catholic Church has numerous schools and other educational institutes as well as hospitals and health care centers across the D.R.C., the second largest country in Africa—a quarter of the size of the United States.

Mr. Tshisekedi took over as president in January 2019 from Joseph Kabila, who ruled for 18 years and delayed elections multiple times. It marked the first peaceful transfer of power in the D.R.C.’s history. But, according to the Council of Foreign Relations’ “Global Conflict Tracker,” the new president inherited a number of crises, including an Ebola outbreak in the east and ongoing violence across the country, particularly in the Ituri, Kasi and Kivu regions.

More than 100 armed groups are believed to operate in the eastern region of the D.R.C., where many rare minerals are found. Despite the presence of more than 16,000 U.N. peacekeepers, these groups continue to terrorize communities and control weakly governed areas. Millions of civilians have been forced to flee the fighting: The United Nations estimates there are currently four to five million displaced people in the D.R.C. and more than 800,000 refugees in other countries.

Over the past 20 years, the Democratic Republic of the Congo has been afflicted by what has been called the biggest conflict since World War II. It has involved armed groups from nine nations and many ethnic groups, within the borders of a land that is rich in rare minerals but with a poverty-stricken population. Over three million people have been killed, and human rights violations and rape have been rampant.

The World Health Organization reports that as of Jan. 12, 2020, there have been a total of 3,398 Ebola virus cases, including 2,235 fatalities. Of the total confirmed and probable cases, 56 percent were female, 28 percent were children aged less than 18 years, and 5 percent were health care workers.

While Pope Francis would be keen to visit and express his closeness to the suffering people of the D.R.C., he already has plans to go to South Sudan, and a second visit to Africa is unlikely in the same year.