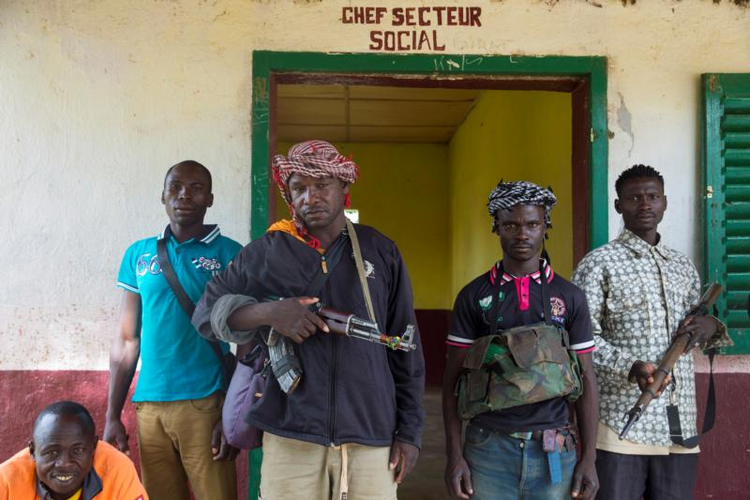 Members of the of the Anti-Balaka armed militia pose as they display their weapons in the in the town of Bocaranga, Central African Republic, April 28, 2017. In new year recommendations, Catholic bishops in the Central African Republic are urging the government to ensure free and timely elections and seek consensual and peaceful solutions"with armed groups. (CNS photo/Baz Ratner, Reuters)

In a series of recommendations for the conflict-torn country, the bishops' conference wrote, "Knowing most of you confess faith in Jesus Christ or in a single creator God, we feel obliged to remind you of your regal duties.

"We urge you to organize free, transparent elections within the constitutional framework, in accordance with the democratic demands of a state of law, and to return to the discussion table with armed groups for consensual, peaceful solutions to disputes and misunderstandings," the bishops said in a message from their Jan. 6-12 plenary in Bangui, the nation's capital. They also urged "good governance and a healthy management of natural resources, to avoid the destruction of fields, theft of livestock and loss of human life."

The country's justice system was still impeded by demands for impunity and lack of reparations, the bishops said, while the state's authority remained ineffective in much of the country, which still has no proper roads or education and health services.

The bishops said the church was offering a "message of hope, peace and awakening of conscience" to Central Africans on the 125th anniversary of their Christian evangelization.

However, they added that the country faced a "magnitude of challenges" in 2020, including resurgent violence and armed groups that intended to set up their own administrations and boycott a February 2019 peace accord.

The country has presidential elections scheduled Dec. 27 and a parliamentary election in February 2021, requiring increased deployments by the national army and the U.N. stabilization mission, which has sought to restrain rival militias since Seleka, a Muslim-dominated rebel force, briefly seized power in 2013.

In their message, the bishops thanked Catholic groups for continuing work for "justice, human rights and improved conditions of life" in Central African Republic, one of the world's poorest countries.

Show Comments ()
Comments are automatically closed two weeks after an article's initial publication. See our comments policy for more.
Provide feedback on this article
Join the conversation: Login or create an account
Before you can comment, you need to update your profile to include your first and last name, as required in our comments policy. Then reload this page and you'll be set up for commenting. Update your profile
Advertisement
More: Africa / War & Peace