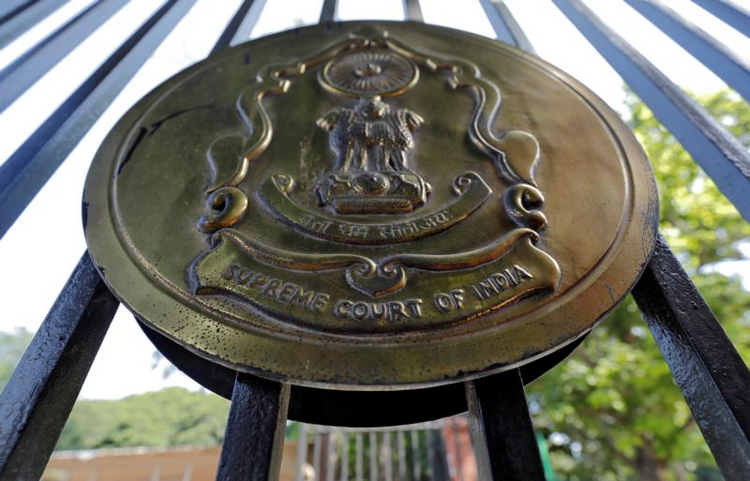 The emblem of India's Supreme Court is seen on a gate of the court in New Delhi Sept. 28, 2018. (CNS photo/Anushree Fadnavis, Reuters)

NEW DELHI (CNS) -- India's Supreme Court has allowed the government to control the appointment of teachers in educational institutions run by religious minorities, a ruling church leaders say violates their right to manage such institutions.

"The order definitely will have a bearing in the administration of church-run education institutions, too," said Salesian Father Joseph Manipadam, secretary to the Indian Catholic bishops' office for education and culture.

The Jan. 6 verdict came while deciding on an appeal challenging a provision in the West Bengal Madrasah Service Commission Act 2008, which said the government panel could screen teachers to be appointed to state-aided madrassas. The schools were declared minority education institutions in West Bengal state, just as thousands of Christian schools in the country.

The Indian Constitution allows religious and linguistic minorities to establish and manage educational institutions of their choice to help with the social advancement of their people.

The Catholic Church runs some 54,000 educational institutions in the country, and at least half of them get financial aid from the state.

With this order, "our right to administer our institution is curtailed. Freedom to appoint teachers is also part of the administration," Father Manipadam told ucanews.org Jan. 9.

The provisions were challenged in 2013 before the West Bengal state's Calcutta High Court on the grounds that they violated the rights of minority institutions. The single-judge bench of the High Court allowed the challenge and found the provisions to be unconstitutional.

However, some candidates, selected by the government panel for appointment in madrassas, challenged the order before a higher bench of the state court. It also upheld the single bench's order. The appeal was subsequently filed before the Supreme Court.

The Supreme Court said government screening, including the appointment of teachers, is permissible if it is intended to ensure the quality of the minority institution, without interfering with its minority status.

However, the verdict "is a direct interference in the administration of minority aided-education institutions," Father Maria Stephen, a former principal and public relations officer of the Archdiocese of Bhopal, told ucanews.org.

"It will only create problems. The government appoints one or two teachers at such institutions, thereby indirectly taking control of the administration. It will affect the freedom of the minority institutions to enforce discipline and impart quality education," he said.

He said the quality of public schools is not good, so people send their children to minority educational institutions, including state-aided ones.

"Minority education institutions maintain their high standards due to noninterference of the government in their administration," he added.

Show Comments ()
Comments are automatically closed two weeks after an article's initial publication. See our comments policy for more.
Provide feedback on this article
Join the conversation: Login or create an account
Before you can comment, you need to update your profile to include your first and last name, as required in our comments policy. Then reload this page and you'll be set up for commenting. Update your profile
Advertisement
More: Catholic Education