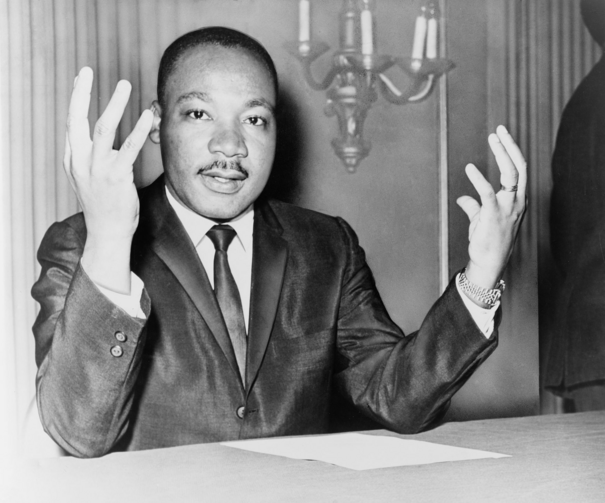 As we celebrate the life and legacy of Martin Luther King Jr. this month, it is worth remembering that despite the intensely political nature of his ministry and activism, Dr. King was himself not a politician so much as a prophet. A minister and a preacher, his activism for civil rights was grounded in a profound understanding of biblical notions of justice and the irrevocable promise made by God to the people of the Exodus. But, as happened already during his life as well as in the half-century after his death, we seem forever to be trying to attach a convenient political label to him.

Dr. King was himself not a politician so much as a prophet.

The Federal Bureau of Investigation under J. Edgar Hoover tried mightily throughout the 1950s and 1960s to identify King as a “Marxist/Leninist” and to link him to Communist political figures: Documents from 1968 released by the F.B.I. in 2017 described King as “a whole-hearted Marxist who has studied it [Marxism], believes in it and agrees with it, but because of his being a minister of religion, does not dare to espouse it publicly.” (Hoover also once publicly called King “the most notorious liar in the country.”)

The enduring call to fight racism
The Editors

The Editors: Politicians fail the country by applying religious tests
The Editors

On the other hand, King also faced criticism from figures like Malcolm X for not being combative enough in the struggle for civil rights for African-Americans, preaching methods of nonviolence when Malcolm X and others wanted a more assertive and militant posture. “We want freedom now, but we’re not going to get it saying, ‘We Shall Overcome’,” Malcolm X once noted. “We’ve got to fight to overcome.” In recent years, some have claimed that King was actually a Republican. (In fact, King was not registered with either major political party.) Figures from all over the political spectrum, in other words, have long tried to turn Martin Luther King Jr. into something he was not.

Martin Luther King Jr. believed that every human being, no matter the color of his or her skin, was born in the image of God.

These debates about King’s legacy miss the most important point: He was not a Marxist revolutionary, nor a political moderate, but a radical Christian. His commitment to the cause of civil rights (and his ultimate sacrifice for that cause) was evangelical: He believed that every human being, no matter the color of his or her skin, was born in the image of God—something that the great monotheistic religions have taught for 4,000 years. Nor was his commitment to nonviolence simply a tactical move to achieve political aims. It was a deeply held belief born of those same religious convictions. We honor his memory and sacrifice best when we see the great man for the prophetic soul he was—not someone to co-opt to our own political aims.