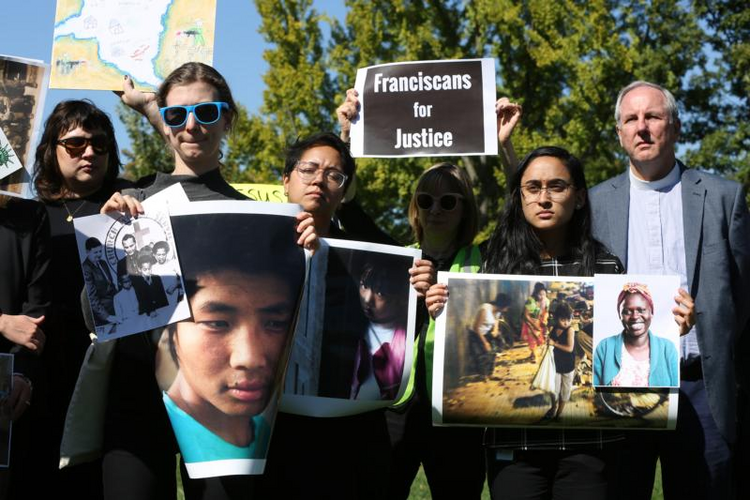 Activists hold signs during a protest Oct. 15, 2019, outside the U.S. Capitol in Washington against the Trump administration's cuts in the number of refugees to be admitted under the U.S. resettlement program. The Catholic and Lutheran bishops of Minnesota, in an open letter first published Dec. 23 in the Minneapolis Star Tribune, urged support and prayers for those seeking shelter and protection. (CNS photo/Bob Roller)

MINNEAPOLIS (CNS) -- The Catholic and Lutheran bishops of Minnesota, in an open letter, urged support and prayers for those seeking shelter and protection.

The open letter was first published Dec. 23 in the Minneapolis Star Tribune -- just before the Christmas Day deadline for state and local governments to tell the Trump administration whether they will authorize refugee resettlement in their area. The bishops stressed that everyone is created in the image and likeness of God and imbued with a sacred dignity that must be protected.

"This is especially true when it comes to the poor and vulnerable," they wrote.

"We are saddened that as Christians prepare to celebrate the birth of Christ -- who himself experienced life as a refugee when his family fled to Egypt -- our nation may be creating even more hardships for vulnerable refugee families," the bishops said.

President Donald Trump's executive order, issued Sept. 26, "seems to unnecessarily politicize what has been a humanitarian program rooted in our nation's long history of resettling families fleeing from life-threatening dangers," the bishops wrote. "We are also troubled by the decision to set a limit of 18,000 refugees in 2020, the lowest in 40 years."

The letter arose out of discussions during an annual retreat for Catholic and Lutheran bishops held Oct. 24 in Collegeville.

Minnesota Gov. Tim Walz informed the federal government Dec. 13 that the state would continue to participate in refugee resettlement programs. Walz declared: "The inn is not full in Minnesota," which the Catholic and Lutheran bishops noted in their letter.

"We ask our mayors and county elected officials to also publicly express support for refugee resettlement," the bishops wrote. "The assistance we offer is repaid through the talents they share and their economic participation in the life of our communities."

They told elected officials: "Rather than posing a threat to our values or our way of life, most refugees seek to build a better life and contribute to the vibrancy of their new homeland. We ask that you become their advocates, too."

In their letter, the bishops called on those who support refugee resettlement to avoid demonizing those who are opposed. "We need to build bridges of dialogue instead of walls of resentment," they said.

The bishops said they stand with their refugee brothers and sisters, and asked them to be patient "with those for whom your presence presents a challenge." And they asked people in their congregations and those of goodwill to pray for refugees and express their support for them to elected leaders.

The letter came in advance of National Migration Week Jan. 5-11, marked by the Catholic Church in the United States as an opportunity to reflect on the plight of migrants, refugees and victims and survivors of human trafficking. The theme for National Migration Week 2020 is "Promoting a Church and a World for All." Lutherans in Minnesota observed Immigration Sunday Minnesota Jan. 5.

Show Comments ()
Comments are automatically closed two weeks after an article's initial publication. See our comments policy for more.
Provide feedback on this article
Join the conversation: Login or create an account
Before you can comment, you need to update your profile to include your first and last name, as required in our comments policy. Then reload this page and you'll be set up for commenting. Update your profile
Advertisement
More: Prayer / Refugees