Could a new religious hymn about America break our polarization? 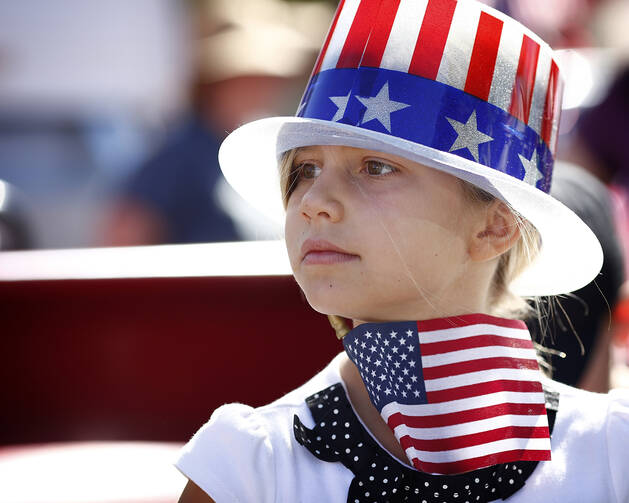 A few months ago, I attended a conference in Chicago sponsored by the Catholic Common Ground Initiative. During two days of presentations and conversations we explored the causes of polarization in the church and in the country and discussed various strategies for addressing both. Polarization is a serious problem and a complex one, involving a long list of causes and myriad effects. But you already know that, for we see the effects of polarization every day on the cable news channels, in newspapers, in our social media feeds. The cumulative effect can be enervating if not downright dispiriting.

At Mass on the second day of the conference, the Communion hymn was a song set to “Aurelia,” a tune composed by Samuel Sebastian Wesley in 1864, familiar to most Christians as the setting for “The Church’s One Foundation.” As I sat listening to the hymn, I thought back to the years I spent living in England during my theology studies and of the beautiful music I often heard sung at public events, songs like “Jerusalem,” “I Vow to Thee My Country” and “Guide Me, O Thou Great Redeemer.” Rich in theological content, these songs are known to nearly every Briton and are sung at all manner of gatherings both sacred and profane.

As I sat there in Chicago, I thought about how music can serve as a bridge across divisions, uniting hearts and voices in a way that mere speech cannot. Throughout that day I put pen to paper, and by the time I arrived home in New York, “America, My Country” was largely completed. (See embedded image.)

I sought to write a hymn rather than a patriotic song. I like patriotic songs, and we have several good ones in our national repertoire; but I wanted to situate America in a specifically religious context, and I was intrigued by the idea of what a prophet like Isaiah might say to the contemporary United States. By using this imagery of the Old Testament, along with a tune familiar to most Christians, I sought to write a hymn that would be accessible to people from multiple faith traditions.

The idea of America as unfinished, as always aspiring to something more, is the motive force of the American dream.

Yet I also wanted the hymn to evoke the memory of all Americans, not only people of faith. So I reached back into our shared history, searching for phrases and imagery that might prompt our national memory. No political party has a monopoly on such things. The biblical phrase “a city on a hill,” for example, was a favorite of President Reagan’s, and the words of Isaiah cited in the last verse were invoked by President Kennedy in his inaugural address.

The polarized world we live in, of course, means that some will inevitably see in this modest work a veiled critique or even, perhaps, a direct critique of contemporary politics or specific politicians. That is not my intention. True, the lyrics present a challenge, but that is what prophets like Isaiah do. The idea of America as unfinished, as always aspiring to something more, is the motive force of the American dream. That and the other values that the hymn evokes are the values I was taught in my youth, which were then thought to be held dear by all Americans. I believe they still are. But now, unfortunately, expressions of these shared values, like everything else, are subjected to the inquisitorial scrutiny of political partisans of every stripe—one of the more odious consequences of polarization.

These decisions will no doubt be painful, and there will be no shortage of debate about the best way forward.

In the end, of course, it’s just a song. You might like it, you might not. I offer it here as a gift to you, our readers, to my church and my country. We face momentous decisions in the year ahead, as this issue’s editorial indicates. These decisions will no doubt be painful, and there will be no shortage of debate about the best way forward. But if we are to know where to go, we must remember where we come from and, more important, who we are. The values that have guided this country through more than 200 years should not be and cannot be up for debate. “We are bound together by the most powerful of all ties,” President Gerald Ford once said, “our fervent love for freedom and independence, which knows no homeland but the human heart.”

In the incarnation, the impossible became possible
Matt Malone, S.J.

Like you, my friends, my heart is weary of polarization, of partisanship, of the cynical motive-questioning that characterizes too much of our public discourse. But in the end, I still believe that “there is nothing wrong with America that can’t be cured by what is right with America.” I still believe in that “city upon a hill.” I still believe that “the arc of the moral universe bends toward justice”; that “we have nothing to fear but fear itself”; that “the better angels of our nature” will prevail; that it is still worth asking what I can do for America, my country.