I’m a Jesuit in Lebanon. Here’s why I’m protesting with my brothers and sisters.

I’m a Jesuit in Lebanon. Here’s why I’m protesting with my brothers and sisters. 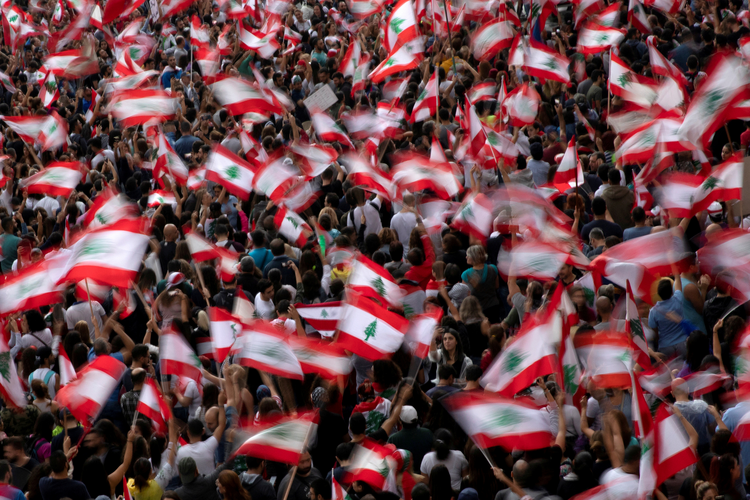 I am writing these lines on a road that has just been blocked by protesters, 50 meters from the Jesuit residence in Beirut, not far from the location of the first protest of what is being called here the October Revolution. The winds of October suggest the beginning of fall, usually just a cooling breeze to accompany me on my way to class at the University of Saint Joseph, the Jesuit university in Beirut, where I study theology and journalism. Do they signal something more this year?

Protests have been springing up all over Lebanon since Oct. 17 after new taxes were announced that would badly affect people who were already struggling financially. Especially galling has been a tax on Whatsapp calls and threats of further hikes of the value-added tax, which would reach 15 percent.

In a country marked by religious divisions, the protests have crossed sectarian divides, expressing a rare Lebanese unity. Protesters from all of Lebanon’s faith communities—the Lebanese Constitution officially acknowledges 18 religious groups—have joined together in a spontaneous national resistance. The anger that has inspired these protests has been building through years of government mismanagement, financial insecurity and flagrant nepotism.

Why is this happening? Conditions in Lebanon have been so bad for so long that most people seemed to have come to accept a profound level of government dysfunction. But this summer a series of difficulties—from wildfires raging across the countryside to a national shortage in fuel—highlighted the costs of government mismanagement and financial ineptitude.

This summer a series of difficulties—from wildfires raging across the countryside to a national shortage in fuel—highlighted the costs of government mismanagement and financial ineptitude.

The mythological Phoenix has been associated with Lebanon’s capital, Beirut, a city that has been destroyed and rebuilt many times over its long history. And, like a Phoenix, we hope that from these fires that have ravaged the forests of Lebanon our country will rise to new splendor. Another fire has been stirred within the hearts of Lebanese people, who have endured years of government corruption that has squandered national riches and left the country with $85 billion in debt.

This uprising is not only about Lebanon’s broken political system; it calls for social and economic reform, too, and speaks to everyone, including the nation’s religious leaders. The Lebanese church has called on high government officials to resign. The Maronite Patriarch Beshara Rai told the members of Lebanon’s ruling class: “Listen to the people before it’s too late.”

The most powerful and blunt statement came from the Byzantine Orthodox bishop of Beirut, Elias Aude, who said during a televised interview, “The void that the government threatens us with [if its members resign] is much better than the current situation.”

The public and powerful response from these Christian leaders is a reply to the cry of the poor. I felt this same call to respond while listening to the voice of the defeated and the oppressed. I decided to join them, to be in solidarity with their cause.

The reply of Jesus to Nicodemus that “the wind blows where it wills” (Jn 3:8) is the only explanation that I and many others can offer for what is happening. We “do not know where it comes from or where it goes.”

We were asking ourselves: “Were not our hearts burning [within us]” (Lk 24:32), while we were listening to the cry of our marginalized fellow citizens in television broadcasts of the protests before we joined them?

St. John Paul II: “Lebanon is more than a country; it is a message of freedom and an example of pluralism for the East, as for the West.”

Individuals’ reactions to the protests among Lebanese Christians have varied. Some join directly, others through prayer. Some Jesuits set up a tent in the midst of the Martyrs’ Square in Beirut among the protesters and invited people to think about the outlines of a better Lebanon. University students were invited to dream of a brighter future, perhaps one in which emigration is not their first desire upon graduation.

Other Jesuits have taken literally the call of Pope Francis for the church to become a field hospital. They concelebrated a Mass with the Lazarists priests in the Church of Saint Vincent de Paul in downtown Beirut, a church still in ruins—it that had been destroyed during the Lebanese Civil War. The previous Sunday, Oct. 27, two Jesuits answered the call of the protestors to celebrate the holy Mass at the protest epicenter. In the middle of the protests, nearly 500 people celebrated Mass together.

Pope Francis was not the first pope to call on the people of the Middle East to become missionaries in their countries. In 1989 St. John Paul II insisted on the same: “Lebanon is more than a country; it is a message of freedom and an example of pluralism for the East, as for the West,” he said.

Yes, it was a prophetic call that is being realized 30 years later, when most of the Lebanese decided to abandon their political party banners and carry only their national flag. They have gathered as all sects and religions melt into one, praying and eating together, proclaiming that we are all children of the same God, and we want a unified country for our children.

This is why I am protesting. I am a Syrian citizen who has been living in Lebanon for 11 years. Lebanon for me is more than a country that gives me residency. Lebanon is an inspirational example for the whole region of freedom of speech, deep political engagement and love of life.

In Lebanon I studied philosophy, learned about interreligious dialogue and deepened my theology studies. In Beirut I stand in solidarity with my second country. I do this for Syria, too, because if the revolution succeeds in Lebanon, then we can dream of real change in all other Arab countries, free of the myth of conspiracies and foreign intervention to excuse away our civic and political problems.

We need Lebanon to be a message for both the East and the West—that when people are free to dream and protest and be themselves, they can become open to the movement of the Holy Spirit. They can re-create the world and move it toward the kingdom of God, where “He has thrown down the rulers from their thrones but lifted up the lowly. The hungry he has filled with good things; the rich he has sent away empty” (Lk 1:52-53).

We are called to be prophets and witnesses in this moment. Dany Younes, S.J., described it as a crucial moment “pregnant with possibility,” when he called Jesuits and their lay collaborators to follow the “winds of change,” a change built on spiritual discernment that is open to the newness we are experiencing among us

The miracle of Lebanon: Despite tensions, Muslims and Christians live in peace.
Gerard O’Connell

Many old prejudices and stereotypes have been unmasked in a movement that no one can fully comprehend. I have witnessed many examples of this in recent days that demonstrate that the Spirit blows however it wants.

In one of the crucial moments of the revolution, the Lebanese Army was ordered to use force to open roads blocked by civilians. Pierre Trad, a teacher and a dear friend for many Jesuits, was in the middle of a stand-off. He reminded the soldiers that the protesters were fighting for their rights as well. Suddenly, a soldier on the other side, a former student, turned and asked Pierre to stop blaming the soldiers for the street confrontations. People on both sides were moved to tears, including the soldier. Pierre and his former student embraced and quickly became an icon of the peaceful revolution. “A very emotional moment with my student during the revolution,” he wrote. “These soldiers are our students, brothers, sisters, family....Our army....our red line.”

I will always remember the words of one of the protesters as I was heading to assist in celebrating Mass in the middle of the protest on Oct. 27. He said, “Father, you came just at the right moment.” This “right moment” is the moment of justice when we are all called to examine ourselves and repent.

As my brother Jesuit said in his homily that day: “We have to turn the famous slogan of the revolution ‘All of them, means all of them’ to be ‘All of us, means all of us.’ Because everyone is engaged in the corruption that [is] invading our countries even if they are just doing so passively.”

Are we finally witnessing the rebirth of a Lebanon we have been hoping for since the end of the civil war? Inshallah, this popular movement declares the actual end of the war and the beginning of a truly “Greater Lebanon.”

This article also appeared in print, under the headline “In Lebanon, a protest movement crosses old boundaries,” in the November 25, 2019, issue. 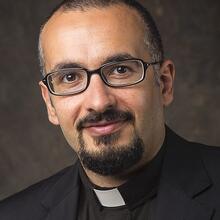 Tony Homsy, S.J., is a Syrian Jesuit from Aleppo studying theology and digital journalism at Saint Joseph University in Beirut.