Explainer: What is the global response to the refugee crisis? 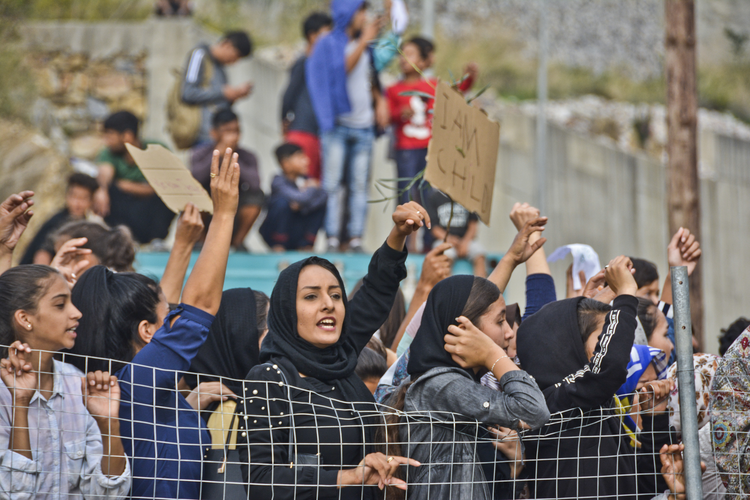 Refugees and migrants at a camp on the Greek island of Samos, on Oct. 18.  (AP Photo/Michael Svarnias)

This is not hyperbole: Today more people have been forced to flee their homes than at any time in recorded history. This displacement is a complex, often vexing topic, and one that can be exploited for political purposes. There is some good news about initiatives to address the problem, including the first ever Global Refugee Forum, which will be held in Geneva this December. But first here are some terms and statistics that can help make some sense of the headlines. Keep in mind that behind these numbers are individuals who want nothing more than what we all want: a life consistent with our dignity as children of God. How we respond reflects our own humanity.

The scope of displacement worldwide

Refugees
26 million are refugees—individuals who, due to a well-founded fear of persecution or violence for reasons of race, religion, nationality, political opinion or membership in a particular social group, have fled their countries. Half of all refugees are under 18 years of age.

Asylum seekers
3.5 million are asylum seekers—individuals who seek protection in a specific country and must wait to be recognized by that country as a refugee, with the attendant protections due to well-founded fear of persecution and violence.

Internally Displaced Persons
41 million are internally displaced persons—individuals who have fled their homes because of internal strife or natural disaster but have not crossed an international border. I.D.P.s remain under the legal protection of their own governments, and unlike refugees, are not eligible for international legal protection, nor many types of aid. They are the largest group assisted by the United Nations High Commissioner for Refugees.

The foundation of international refugee law is the 1951 Geneva Convention. Adopted in the wake of World War II, this agreement defines “refugee” and spells out the legal protection and assistance that must be given to refugees by the Convention’s 145 signatories. The Convention also states that refugees must respect the laws and regulations of the host governments and allows that some categories of people (e.g., war criminals) do not qualify as refugees.

What we owe refugees fleeing persecution around the globe
David Hollenbach

In 1967, the Protocol Relating to the Status of Refugees expanded the scope of the Convention’s protection to events beyond Europe and after 1951, as the challenge of displacement was recognized as an increasingly global phenomenon. The Protocol has 146 signatories, including the United States. Only 43 U.N. member states are not signatories to either the 1951 Convention or 1967 Protocol.

This Dec. 17 and 18, in Geneva, Switzerland, the United Nations High Commissioner for Refugees will hold the first ever Global Refugee Forum. This gathering of U.N. member states, together with private businesses, nonprofits and nongovernmental organizations (including the Jesuit Refugee Service) will gather to address the current refugee situation. This meeting follows up on the 2018 Global Compact on Refugees—the international community’s statement of resolve to improve the world’s response to today’s refugee situations by ensuring that refugees and the nations hosting them receive the support they need. That compact was endorsed last December by 181 member nations. Only Hungary and the United States voted no, with the United States citing concerns over “sovereignty”; Eritrea, Liberia and Libya voted “present.”

The Global Compact on Refugees was endorsed last December by 181 nations. Only Hungary and the United States voted no.

The G.C.R. has four objectives:

The G.C.R. envisioned periodic meetings to assess progress toward its goals—hence this December’s meeting. During the meeting, states and other stakeholders will exchange “good practices” as well as announce pledges and contributions within six focus areas:

A successful Global Refugee Forum this December will see more states and other actors joining the response to the refugee situation as donors, hosts and partners. The G.R.F. hopes to enlist the “missing middle”—that is, those states that could either contribute more or host more refugees.

In 2018, 76 percent of U.N.H.C.R.’s budget came from the top 10 donor states, with 38 percent from the United States alone, and 60 percent of the world’s refugee population lived in just 10 countries. This state of affairs is not sustainable.

As an American serving at that time with J.R.S. in Uganda, I had an experience of both extremes and appreciate the need to engage this “missing middle.” Consider: Uganda is a country struggling to move itself forward developmentally, yet it welcomes refugees from South Sudan, Democratic Republic of Congo and Burundi, among others, with a model national refugee policy of integration and welcome. Still, international humanitarian aid to Uganda, the African nation with the most refugees, was underfunded by 65 percent.

At this same time, J.R.S. in Uganda was grateful to receive funding from the American people via the U.S. State Department’s Bureau of Population, Refugee, and Migration. The United States has been a consistently generous donor both in absolute and relative terms. Not only did it provide more than one-third of U.N.H.C.R.’s 2018 budget, it ranked sixth among donors when adjusted by gross domestic product—surpassed only by Sweden, Denmark, Norway, Germany and the Netherlands, countries that do not have the same global security commitments as does the United States.

In 2018, 76 percent of U.N.H.C.R.’s budget came from the top 10 donor states, with 38 percent from the United States alone, and 60 percent of the world’s refugee population lived in just 10 countries.

The United States has also shown leadership in refugee resettlement. In June, the Pew Research Center reported that, until 2017, it resettled more refugees each year than the rest of the world’s countries combined. But Canada took the top position in 2018, with 28,000 resettled refugees to 22,900 for the United States. (In 2016, the United States resettled 92,000 refugees.)

Moreover, U.S. numbers are dropping sharply. President Trump recently announced only 18,000 resettlement spots in 2020, down from the target of 110,000 that President Obama set in his final year in office.

The Global Refugee Forum will be a high-level gathering of states and other stakeholders, but what can individuals do about the forced-migration crisis? A few thoughts:

Show Comments ()
Join the conversation: Login or create an account
Before you can comment, you need to update your profile to include your first and last name, as required in our comments policy. Then reload this page and you'll be set up for commenting. Update your profile
Show Comments (
1
)
Comments are automatically closed two weeks after an article's initial publication. See our comments policy for more.
Sam Sawyer, S.J.
1 year 6 months ago