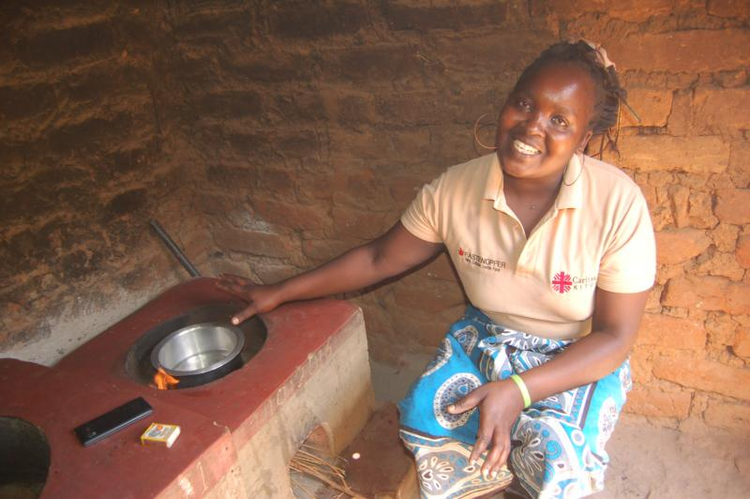 Grace Kathini Kavilu, a 32-year-old mother of two, explains how the cookstove works during an Aug. 26, 2019, interview at her home near Kitui, Kenya. About the three years ago, she discarded the three traditional cooking stones and constructed the latest stove with the help of Caritas Kitui, the humanitarian wing of the Kitui Catholic diocese. (CNS photo/Fredrick Nzwili)

KITUI, Kenya -- As Grace Kathini Kavilu pushes a few dry twigs into her cookstove, she recalls the forest that once covered her area, but has since disappeared.

This day, the 32-year-old mother of two has picked the twigs falling freely from mango trees, now a main feature in her area. The resident of Kitui County, a semi-arid region in eastern Kenya, only needs a few of the sticks to light her new energy-saving cookstove.

About the three years ago, she had discarded the traditional three cooking stones and constructed the latest stove with the help of Caritas Kitui, the humanitarian wing of the Diocese of Kitui.

"This one emits less smoke, it's clean and cooks faster. It's not cumbersome," said Kavilu, who has since trained as an artisan and leads the construction of such stoves in the diocese. "It also protects the environment."

"I am saving on firewood. There are no forests (from which to) collect firewood anymore, we have to buy it," Kavilu said during an interview in her home near Kitui, a town about 100 miles east of Nairobi.

In the county, like many parts of Kenya and the developing world, many women and girls continue to use open fires or traditional stoves for cooking. The three-stone stoves require women to spend long hours collecting firewood.

Harvesting the wood causes further deforestation. As the people move to feed an endless demand for firewood or charcoal in Nairobi and other cities and towns, most of the forest cover in Kitui has been depleted.

But the Catholic Church in Kenya, through Caritas departments in the dioceses, is seeking to bring about change. The church is promoting a variety of energy-saving stoves with a view to stopping forest destruction and climate change.

One such stove is the rocket stove, popular in Kitui County. A standard rocket stove requires 50 bricks, a wheelbarrow of sand, ash and bag of red oxide. With a subsidy from the Kitui Diocese, each stove costs about $32. It also requires a well-trained artisan.

Caritas in Kitui started to help construct such stoves in 2013, and nearly 10,000 of them have been installed in homes, under the diocesan carbon offset project.

Ambrose Mutua Kivusyu, project officer, said every time a cookstove is constructed, the diocese is granted a carbon certificate, which is sold in the world's carbon market. So far, the cookstoves in Kitui have earned about $280,000 in the market, he said.

Florence Ndeti, director of Caritas Kitui, said people in Kitui have embraced the stoves, and the demand has been rising each day.

"Through the project, we are also encouraging the community to plant more trees around their households," said Ndeti.

While Caritas oversees the implementation of the project, bishops and priests sensitize the community through groups such as Catholic women and men's associations.

About 200 miles north of Nairobi, the Diocese of Maralal is also promoting the energy-saving cookstoves. Like in Kitui Diocese, the bishop, priests and catechists also actively lead campaigns for the stoves.

"Firewood is one of the major impediments to environmental sustainability, and the introduction of this energy-saving stove is an effort to reduce firewood consumption," said Evans Onyiego, director of Caritas Maralal. The diocese has introduced two types of the cookstoves, one that can efficiently prepare meals for a large population in an institution and a domestic stove for families.

"The concept is meant to benefit rural communities which use open fire(s) for cooking," said Onyiego.

In Maralal, 30 groups have been trained in making the cookstoves. Some people have abandoned charcoal as a fuel.

Ndeti said Kitui is frequently affected by drought, and some very poor households cannot afford the cost paid to the artisan after construction.

Onyiego said he fears training for community is donor dependent and, once the project phases out, reaching out to other areas will become a major challenge.

"The stove still uses firewood, although to a smaller percentage, and thus reaching the point of 'hands off' the forest completely and embracing clean energy like solar may take time," he said.