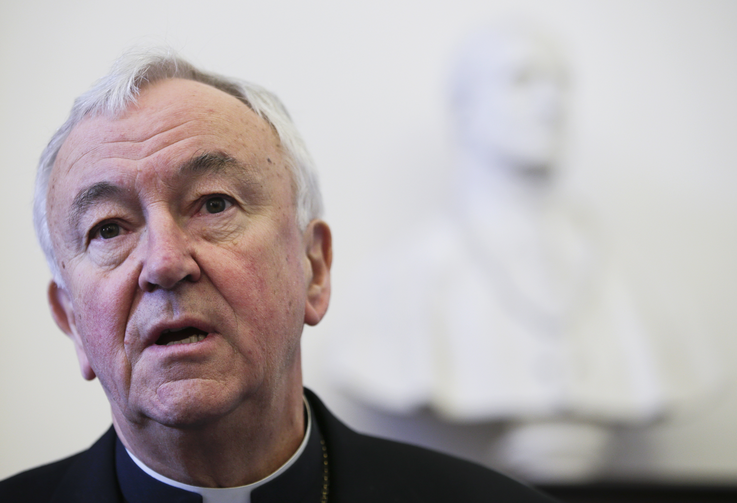 VATICAN CITY (CNS) -- All bishops' conferences and dioceses in Africa should create an office or point person to collaborate with judges, immigration departments and law enforcement to beef up efforts against human trafficking, said delegates to a regional conference.

The Catholic Church in Africa needs to form "effective partnerships and collaboration with the aim of cutting the umbilical cord of human trafficking and of the slavery of our days," said Archbishop Philip Subira Anyolo of Kisumu, Kenya, according to Fides, the news agency of the Congregation for the Evangelization of Peoples.

The archbishop, who is president of the Kenya Conference of Catholic Bishops, was one of more than 100 delegates from eight countries in Africa and the United Kingdom attending the second African Regional Conference of the Santa Marta Group in Nairobi, Kenya, Oct. 1-4.

Since its foundation in 2014, the Santa Marta group has been dedicated to the universal elimination of human trafficking and slavery by bringing together police chiefs, bishops and members of religious orders from around the world.

Cardinal Nichols: "Human trafficking is a hugely profitable criminal activity" that shows "callous disregard for the dignity of every person."

If each national conference and diocese were to create an office working "in the spirit" of the Santa Marta Group, delegates said, they could better identify and address the problem in countries of origin, transit and destination that facilitate human trafficking, according to a report Oct. 4 by the Consolata Missionaries' Catholic Information Service for Africa.

Cardinal Vincent Cardinal Nichols of Westminster, England, president of the Santa Marta Group, said in a written message to the group, "We have to remember that human trafficking is a hugely profitable criminal activity and those who drive it forward are endless both in their greed for profit and in their callous disregard for the dignity of every person."

"They must be stopped, and victims rescued, cherished and supported," he said in remarks that were read at the conference on his behalf. He urged participants to look into factors contributing to trafficking, such as poverty, lack of opportunity, corruption and migration.

Whether people recognize it or not, human trafficking and modern-day slavery are happening "within our own communities. Anyone can be a victim as traffickers use extensive manipulation to control their victims," he said, according to CISA.

The Santa Marta Group, which includes hundreds of representatives from the Catholic Church, law enforcement, courts and immigration-focused organizations in 35 countries, is named after the Santa Marta residence where Pope Francis lives and where police chiefs and Catholic bishops held their first meeting as part of an initiative begun by the Catholic Bishops' Conference of England and Wales.