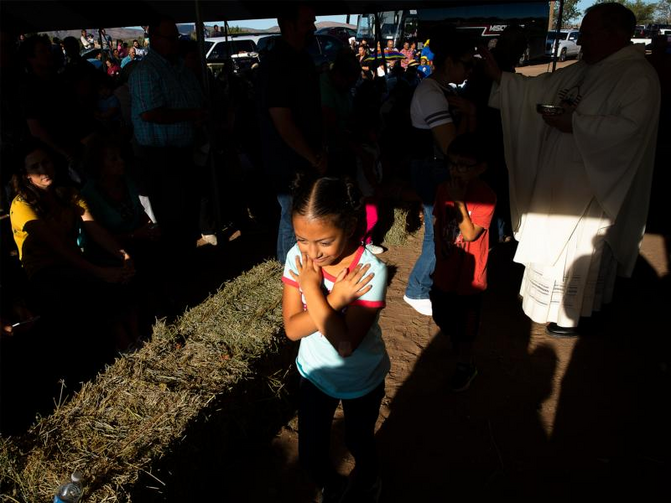 A girl crosses her arms after receiving a blessing during Communion at an outdoor Mass Sept. 26, 2019, in Hatch, N.M., which was part of a pastoral encounter by U.S. bishops with migrants at the border. The Sept. 23-27 pastoral visit, sponsored by various offices of the U.S. Conference of Catholic Bishops and other national organizations, aimed to highlight the church's ministry to migrants, the border conditions and immigration laws affecting them, and their material and spiritual needs. (CNS photo/Tyler Orsburn)

WASHINGTON (CNS) -- Some immigration judges hearing cases at the U.S.-Mexico border have confided to their fellow jurists they have issued decisions on an immigrant's ability to enter or stay in the United States based on whether the decision would get them fired.

Ashley Tabbador, president of the National Association of Immigration Judges, disclosed this detail during a Sept. 27 panel discussion on sweeping changes in the nation's immigration courts enacted by the federal Department of Justice, which oversees the judges' work.

Tabbador said the Justice Department, since the start of the Trump administration, has begun to "micromanage" the immigration judges' dockets, telling judges, "These cases are not yours," leading to sudden swaps of hundreds of cases from one judge's docket to another.

Judges are now given 60 or 80 cases in one docket, with refugee and asylum claimants hailing from not only Spanish-speaking Latin America but other countries as well, according to Tabbador. Sometimes there is just one interpreter assigned to the docket despite the variety of languages petitioners speak, she added; sometimes there are none.

And despite the hiring of additional judges to handle the caseload -- there are only about 150 more judges now than five years ago -- Tabbador said the case backlog has now passed the 1 million mark.

In recent weeks, the Trump administration has set up temporary courts on the U.S. southern border, dubbed "tent courts." Immigration lawyers and observers, including journalists, have been barred from observing some of these new court proceedings.

Jeremy McKinney, a North Carolina-based immigration lawyer who was a panelist at the Sept. 27 forum, said migrants attending hearings at these new courts are not permitted to bring in a pencil or paper, only the "notice of hearing" that was mailed to them -- and the mailings have grown notorious for not reaching the intended recipient.

"Imagine being at the most significant moment of your life, that decides where you will live, that decides your future, and not being able to keep a record of what's happening," McKinney said. Currently, he added, only 1.2% of all asylum-seekers using this court process are winning their cases.

Pope Francis to judges: ‘There is no justice when there is inequality’
Gerard O’Connell

While immigrants have a right to legal counsel, lawyers are few and far between. According to Judy Perry Martinez, president of the American Bar Association, another panelist, pro bono attorneys now must cross the border into dangerous parts of Mexico to meet with their clients.

This year, for the first time, judges are required to hear a minimum of 700 cases per year or face discipline, including dismissal.

Judges also are ordered to put court dates on hold to hear cases on the border. Further, changes have been made to the appellate process to give the director of the Executive Office of Immigration Review at the Justice Department the power to reverse a judge's decision.

The National Association of Immigration Judges has asked Congress to confer the same status to federal immigration courts as it has to bankruptcy court and tax court. Currently, Tabbador said, it is a "conflict of interest" for the Justice Department to oversee both the immigration judges and the prosecuting attorneys in the immigration cases they hear.

The judges' association also has filed two unfair labor practice charges against the Justice Department. One deals with the inclusion of a white nationalist blog posting in the daily judges' briefing that is sent to each judge's email inbox. As a result of the blog posting, threats have been made against judges, and they have needed security to ensure their safety.

"We have never been given an apology from the Department of Justice" or an explanation of why it was included, Tabbador said.

The other charge focuses on the Justice Department's efforts to decertify the judge's union, saying the judges were managers. "We don't have the authority to order pencils," Tabbador said, "much less hire and fire people."

wonder if that Bishop's blessing can be taken to the grocery store to buy food? Talk, talk, talk..........

Yet another impeachment count. FBI personell have assured me that these practices are under investigation. Management will soon have a rude awakening. So all those who support the Tyrant-in-Chief.