Pope Francis to judges: ‘There is no justice when there is inequality’ 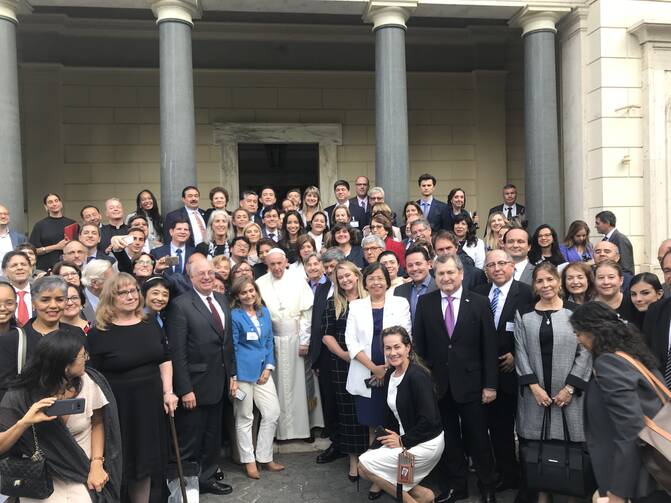 Pope Francis with the judges at the Pan-American conference of judges on social rights (photo: Elisabetta Piquè).

In a speech to some 100 judges from north, central and south America, Pope Francis emphasized the crucial role of judges in protecting and enforcing the social, economic and cultural rights of people, especially the poor and the marginalized.

“We are living at a historical stage of change in which the soul of our peoples is at stake, a time of crisis in which there is the paradox: on the one hand, phenomenal normative development, on the other side a deterioration in the effective enjoyment of globally consecrated rights,” Pope Francis said. He addressed the judges at the end of a two-day conference (June 3-4) on “Social Rights and Franciscan Doctrine,” which was organized by the Pontifical Academy of Social Sciences at the Casina Pio IV in the Vatican.

Pope Francis emphasized the crucial role of judges in protecting the social, economic and cultural rights of people.

Speaking in Spanish, he told participants that included 12 judges from the United States, eight from Brazil and over 20 from Argentina, “I’m concerned that voices are raised, especially by some ‘doctrinaires’ that seek to explain that social rights are ‘old,’ outdated and have nothing to do with our society today.” By doing so, he said, “they confirm economic and social policies that lead people to accept and justify inequality and indignity.” He said, “the injustice and the lack of tangible and concrete opportunities behind such analyses [made] by people that are incapable of putting themselves in the feet—I do not say the shoes, because in many cases people do not have them—is a form of generating violence, silently, but in the end violence.”

Speaking forcefully, Pope Francis said: “It seems that the constitutional guarantees and the international treaties that have been ratified have in practice no universal value.” He was referring to the fact that today the social and economic rights, which were endorsed in conventions and ratified by most governments at the United Nations, are being devalued to a profoundly disturbing degree in the drive of globalization. He noted that “increasingly” governments now countenance unregulated ways of doing things, especially in regard to the laws relating to social rights.

He drew attention to the fact that “social injustice” has become “naturalized” in today’s world and for that reason has been “made invisible.” Pope Francis continued, “We only remember and recognize this [injustice] when some people make noise on the streets,” but then “they are rapidly categorized as dangerous or troublemakers” in an effort to silence them.

Pope Francis said that, for a political economic system “to develop in a healthy way,” it “needs to guarantee that democracy is not only nominal” but takes “concrete actions that protect the dignity of all people, under the logic of the common good, in a call to solidarity and preferential option for the poor.” But to achieve this he said “requires efforts from the highest authorities” of the state as well as from “the judicial power” so as to “reduce the distance” between the juridical recognition of social rights and their concrete implementation.

Significantly, he expressed his concern at “a new form of external intervention in the political scenarios of countries through the improper use of legal procedures and judicial formulations” and stated that “this ‘lawfare,’ besides putting in danger the democracies of countries, is generally used to undermine emerging political processes and tends to systematically violate social rights.”

“In order to guarantee the institutional quality of states, it is essential to identify and neutralize these types of practices which derive from a wrongful judicial activity combined with parallel multimedia operations,” he said.

“So often men and women judges are left alone to face the walls of defamation, opprobrium and calumny.”

Pope Francis expressed his joy that the conference has approved the establishment of a “Permanent Pan American Board of Judges in Defense of Social Rights.” It is hoped this board may coordinate efforts in the Americas to optimize judicial policies centered on the full respect of social, economic and cultural rights, and that it will promote training courses and create committees to defend magistrates under pressure. Francis, who recognized in his speeches that judges are often targeted by political and other forces—including the media—in many countries of the Americas, welcomed this new body.

“So often men and women judges are left alone to face the walls of defamation, opprobrium and calumny,” Pope Francis said. And it requires “great integrity to be able to overcome them.”

The pope expressed the hope that this new body will help “to overcome the solitude of the judiciary” and provide “mutual support and assistance” to judges as they seek to carry out their important mission to ensure justice for the poor and oppressed. He concluded by saying they are called to be “protagonists in the transformation of the judicial system” in their respective countries “based on values, on justice and the primacy of the dignity of the human person.”

The Vatican conference discussed the key role of judges in helping implement the rights to “Tierra, Techo, Trabajo” (“land, housing and work”) that Pope Francis has so often spoken about, particularly in his keynote addresses to the popular movements, especially in Santa Cruz, Bolivia in 2015, and in his encyclical “Laudato Si’” and his programmatic document, “The Joy of the Gospel” (2013). Participants also discussed how as judges they can find ways to challenge budgetary constraints and exogenous banking or financial controls based on their countries’ foreign debt. Importantly too, they discussed “how to overcome political pressures and create a worldwide movement based on the unrestricted defense of social rights,” also through the development of new legal practices in the courts.

The conference, which was chaired by the Italian economist Stefano Zamagni, was a follow-up to a similar one held by the faculty of law at the University of Buenos Aires in June 2018, which discussed the legal inspiration ingrained in the fundamental magisterial documents of the social teaching of Pope Francis, which is solidly grounded in the century old-social teaching of the church, and the effective implementation of social, economic and cultural rights.

Equality has about 50 different definitions. Inequality has been the natural order of the human race since the beginning. God made us that way.

It's ironic that he is addressing judges from Latin America where Catholicism and its philosophy of forced inequality has caused much of the poverty and violence there. He fails to address what has caused some areas to prosper much more than others. Until he does, there will be no possible solutions coming from the Vatican. See the video on Venezuela currently on this site.

The pope gave a sermon on political ideals to a group of judges.

This is a Pope that desperately needs to sit in front of a mirror and tell himself his own lessons while he points an accusatory finger at himself. Great teaching Pope Francis - it's a shame you don't think it is worth following. I actually do.

These bad people who don't care about social justice now lead people to accept and justify inequality and indignity.

Wow! Pope Francis isn't that exactly how you treat women in our church. You rob all women of the opportunities and sacraments that are necessary for the community to recognize that women have same and equal dignity to their brothers and you do this despite the Gospels commanding you not to do so and despite Christ never giving you the authority to treat anyone in this oppressive and biased manner.

Remember what Bono has told us based on his working in the poorest places on earth:. Poverty is Sexist! And who has always supported sexism throughout the centuries? The RCC hierarchy that's who. We need to make the changes in our church that matter and that means ordaining women priests and bishops and allowing them to become cardinals and Popes.

It's good that Pope Francis is aware of the relationship between inequality and justice. Perhaps this will motivate him to do something about the inequalities the church imposes upon women.

Judges are human, fragile and mortal. We need to keep them in our humble prayers.