Australian diocese to pay millions in settlement in one abuse case

Australian diocese to pay millions in settlement in one abuse case 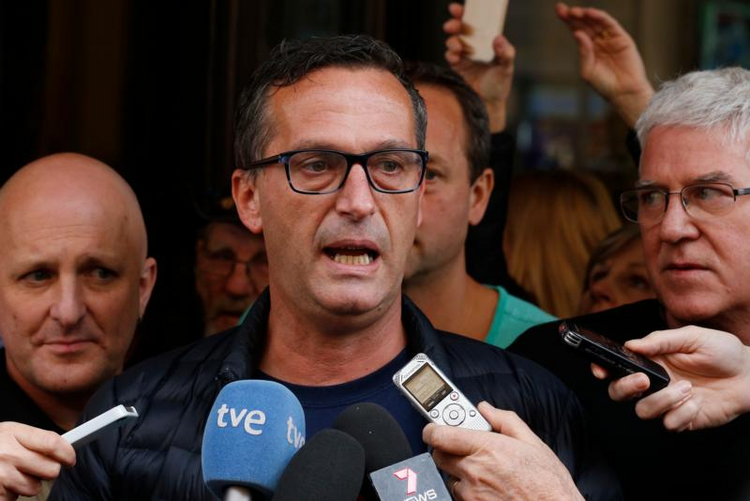 David Ridsdale, who was sexually abused by his uncle, Gerald Ridsdale, then a priest, stands next to fellow sexual abuse survivors in Rome March 3, 2016. Lawyers say the Australian Catholic Church has opened the floodgates for tens of millions dollars in compensation claims after the Diocese of Ballarat admitted, for the first time, it knew of the behavior of the pedophile priest, yet continued to move him around from parish to parish. (CNS photo/Paul Haring)

SYDNEY (CNS) -- Australia's Ballarat Diocese will pay up to $3 million (US$2.03 million) in a landmark compensation claim for clerical sexual abuse after a victim, code name JCB, won an out-of-court settlement for abuse during the early 1990s by Gerald Ridsdale, a former priest.

The case was against Bishop Paul Bird of Ballarat, because of actions by two now-deceased bishops: Ronald Mulkearns and James O'Collins. The case was only allowed after the Australian government struck down the so-called Ellis defense, which held that the church was not a legal "person." Ridsdale, 85, is serving as the latest in a string of multiyear prison sentences after being found guilty of abusing 85 children.

"Nothing will make up for what happened to me and so many others," the victim said in statement Sept. 27, the day after the settlement. "I feel we have achieved something for myself and the others caught up in this mess. I feel we held the church accountable and I feel vindicated."

Although details of the settlement are confidential, Australian media reports said the victim will receive more than $1 million, with legal fees on both sides understood to amount to at least $1.5 million, all of which will be covered by the diocese.

The church was forced to admit it knew of Ridsdale's offending at the time he abused the plaintiff because church knowledge was established by the 2013-2017 Royal Commission into Institutional Responses to Child Sexual Abuses.

Judy Courtin, one of the victim's lawyers, told Australia's ABC news: "It's only been in the last year and a bit that it was possible to take the Catholic Church to court, to sue them. ... The doors are opening, and so they should. Victims have been silenced for decades now. Church bodies have not been accountable to our laws, and finally victims and survivors have this opportunity."

Now more multimillion-dollar settlements or court orders are expected, with as many as 800 civil cases concerning clergy sex abuse now before the courts in the state of Victoria. At least one of the cases involves imprisoned Cardinal George Pell. His conviction on one rape and four molestation charges of two 13-year-old choirboys is currently being appealed to Australia's top judicial body, the High Court.

Catholic institutions in Australia are feeling the impact of the abuse payouts, include tens of millions of dollars already paid out under victims compensation plans. While the Australian Catholic Church has an estimated $9 billion in assets -- many of which are held in historic churches, schools, hospitals and nursing homes -- many of these assets are not held by dioceses being targeted by complainants.

Australian media reported the Melbourne Archdiocese, the focus of many abuse claims, had been selling property and cutting staff.

Meanwhile, the Australian Church has signaled that it will make another attempt at overhauling its seminaries, many of which were found by the Royal Commission to have been "breeding grounds" for pedophiles. Clerics who spoke to Catholic News Service on the condition of anonymity said the Australian church has been attempting seminary reforms for many decades with little success, but that the Royal Commission, as well as decreasing seminarian numbers, may finally force some change.