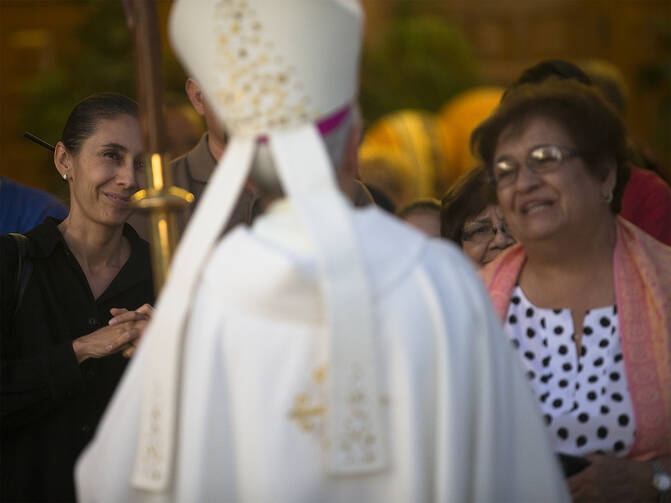 People greet Bishop Mark J. Seitz of El Paso, Texas, after Mass at St. Pius X Church in El Paso Sept. 23, 2019, during a pastoral encounter by U.S. bishops with migrants at the border. The Sept. 23-27 pastoral visit, sponsored by various offices of the U.S. Conference of Catholic Bishops and other national organizations, aimed to highlight the church's ministry to migrants, the border conditions and immigration laws affecting them, and their material and spiritual needs. (CNS photo/Tyler Orsburn)

EL PASO, Texas (CNS) -- At the start of a week focused on the plight of migrants, El Paso Bishop Mark J. Seitz asked Sept. 23 whether Christians are ready to encounter a Christ who exists in the migrants at the U.S. border, in the children who have lost their lives while under immigration custody and those seeking to enter the country looking for work or safety.

"That is the question," said Bishop Seitz said in a homily during Mass at St. Pius X Church in El Paso, where he welcomed bishops from other parts of the country and members of a delegation from the U.S. Conference of Catholic Bishops and many who tend to migrants in various parts of the U.S.

Leading up to the Catholic Church's Sept. 29 celebration of the World Day of Migrants and Refugees, the group planned to visit farmworkers, youth and other migrants, and celebrate the Eucharist each day, keeping in mind the plight of refugees and other vulnerable populations.

Even as anti-immigrant sentiment rises, the church has remained steady in its call to tend to refugees and migrants.

"Thank you for showing your solidarity," said Sister Joanna Okereke, assistant director for Pastoral Care of Migrants, Refugees and Travelers at the USCCB's Secretariat of Cultural Diversity as she welcomed the group to the opening Mass. "Continue to speak in defense of migrants."

During his homily, Bishop Seitz asked those gathered whether they have wondered what it's like to see the face of Christ, shake his hand, embrace him. We can experience what that's like, he said, by seeing the Lord's face in the person in need, in the person who needs our help.

As photos of migrants were displayed on a big screen, he mentioned the names of children who died while in U.S. immigration custody, and showed images of people who come to the U.S. looking for work or seeking safety.

Can we respond to the Christ who appears in the form of those who suffer, whether they be migrants or the poor, he asked.

How we respond "says a lot about us," he said.

"Are we willing to accept our responsibility as Christians?” he asked.

The call to tend to all the marginalized is a call for all faithful to focus on and should be at the center of faith, said Father Robert Stark, regional coordinator of the Vatican Migrants and Refugees Section, who is attending the gathering and offered brief comments following the opening Mass.

"The pope's prayer is that together we will have an 'encuentro con Dios' (encounter with God) in such as a way that it will help with (accompaniment) not just to include migrants but those who should never be excluded," he said.