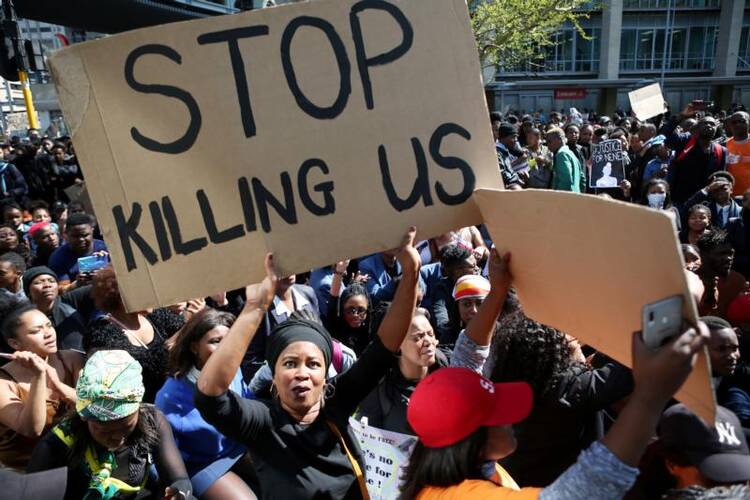 A woman holds a sign as demonstrators gather Sept. 4, 2019, at the World Economic Forum on Africa in Cape Town during a protest against gender-based violence. (CNS photo/Sumaya Hisham, Reuters)

CAPE TOWN, South Africa (CNS) -- South African bishops called for action to end violence against women after a spate of killings and rapes sparked outrage in a country with one of the world's highest murder rates.

"The government must take serious and practical steps to stem the tide of femicide," the bishops' justice and peace commission said in a Sept. 12 statement.

"We commit our churches and schools as safe places for women and children," it said. "We, as church, will use our liturgies, catechesis and homilies to sensitize men and boys about the evils of gender-based violence."

About 3,000 women were murdered in South Africa in 2018 -- five times more than the global average, according to the World Health Organization. The latest police statistics show an average of 58 murders every day in South Africa.

Two brutal murders triggered nationwide outcry, with thousands of protesters gathering outside Parliament in Cape Town early September to demand a crackdown on perpetrators of violence against women.

Uyinene Mrwetyana, 19, was raped and bludgeoned to death when she went to collect a parcel at a Cape Town post office Aug 24. A few days later, boxing champion Leighandre Jegels, 25, was shot dead, allegedly by her police officer boyfriend.

The bishops' justice and peace commission condemned the "callous killings" and urged action to "root out this deplorable culture."

"Male chauvinism, misogynistic tendencies and stereotypes about women ... haunt our country," it said, noting that it is "imperative that the political leadership puts the security of women and young girls high on the national agenda."