Marriage is thriving—but only among college graduates 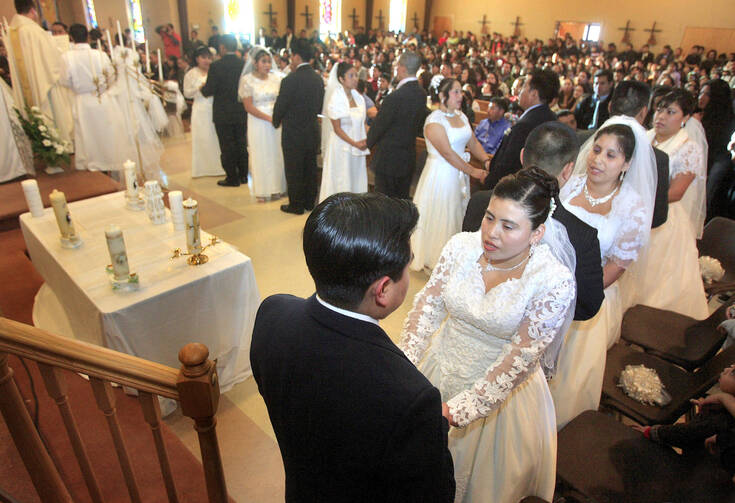 Couples exchange vows during a wedding service at St. Michael the Archangel Church in Georgetown, Del., on Feb. 14, 2010. (CNS photo/Don Blake, The Dialog)

Marriage is not dead in the United States. But it is increasingly associated with better-educated and higher-income households. And despite the old stereotypes about big families, Catholics are very similar to the rest of the U.S. population when it comes to marriage and children.

Educational attainment was not much of a factor in marriage rates in 1960. About 70 percent of Americans over 25 were married, no matter how long they had gone to school. But by 2015, there was a huge educational gap. Nearly two-thirds of college graduates were married, compared with only about half of those who had not gone beyond high school.

One reason for that widening gap may be that a college degree is associated with greater financial security; and despite changing gender roles, 71 percent of all adult women in a 2017 Pew survey said that “being able to support a family financially” is “very important” for a man to be a good husband. (Only 25 percent of men say that the same is important of wives.) This expectation could run into trouble if men continue to lag in educational attainment—by next year, women are expected to earn 58 percent of the bachelor’s and master’s degrees awarded in the United States—and if those without college degrees are perceived to have fewer job prospects.

The marriage rate among Catholics (52 percent of all adults) was close to that of the overall U.S. population (48 percent of all adults) in the most recent Religious Landscape Study, conducted in 2014. That survey also found that among adults ages 40 to 59, Catholics had an average of 2.3 children, only slightly above the average of 2.1 children for all U.S. adults in that age range.

Marriage is not first and foremost about social mobility or status attainment or health benefits or familial stability: it's telling that a Catholic journal (but perhaps not necessarily one in "the Jesuit tradition") focuses on the same things I would expect in a secular analysis of the problems plaguing marriage, but nary a word about the religious dimension (and how that has atrophied over the past 50 years).

Marriage is a bad deal for women. Now that women are in the workforce, they enjoy the freedoms that men have always had. In two income married households, men still call housework "helping," and childcare "babysitting." Men leave the bulk of housework, coordinating schedules, and mundane tasks to "the little woman." Now that student loan debt is a real issue, young couples delay marriage and children. The dirty secret is that paying the minimum payments on these horrific student loans enslaves young people for their entire lifetimes. Few jobs provide the salary to manage the loan debt PLUS mortgages, child care, healthcare, etc. Family life in America is stressful. The Catholic Church has changed. We used to be concerned with social justice. Now the bishops have sidled up to the far right and are on a witch hunt for LGBTQ employees (fire them!), divorced Catholics (no communion for you!), religious liberty (to discriminate) laws, and other ridiculous things. In short, the church does not have the backs of young families. The church is misogynistic and tone deaf. Young people do not need more rules to follow, more shaming. They need support! They need love! Women see clearly that being married is a big risk. Having children removes them from the workforce, or at least slows down their career growth. Then if the marriage goes south, she and the children are the vulnerable ones. The man retains his earning power and often uses the children as a "bargaining chip" in the divorce. And of course, the church is absolutely not a support for the mother. In fact, the church is a big part of the problem in socializing women to think it is their job to do the mundane work in life. Ya, marriage is down. There are good reasons for this.