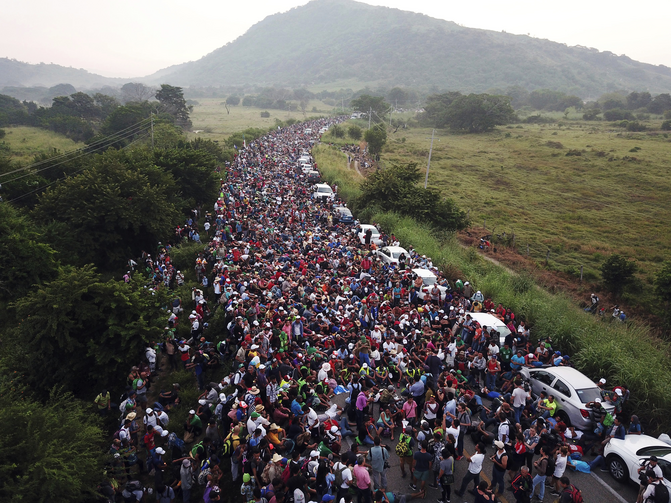 Members of a U.S.-bound migrant caravan stand on a road after federal police briefly blocked their way outside the town of Arriaga, Mexico, on Oct. 27, 2018. (AP Photo/Rodrigo Abd)

(RNS) — A bipartisan group of lawmakers has sent a letter to Trump administration officials calling on them not to reduce the refugee cap to zero, as they have reportedly discussed, arguing that doing so could threaten the country’s “legacy as a protector of human rights” and call into question a promise to assist persecuted religious minorities abroad.

The senators, including Democrat Patrick Leahy of Vermont and Republicans Lisa Murkowski of Alaska, Marco Rubio of Florida and Susan Collins of Maine, said such a move would contradict the country’s historic dedication to refugees, whom they describe as “part of a diverse American culture and flourishing economy.”

“At a time when we are facing the ‘highest levels of displacement on record,’ according to the United Nations Refugee Agency, we urge you to increase the refugee resettlement cap and to admit as many refugees as possible within that cap," the letter reads in part. "America has a responsibility to promote compassion and democracy around the world through assistance to vulnerable and displaced people."

The letter’s authors pointed out that a policy of eliminating refugee admissions conflicted with the administration’s pledge to aid persecuted religious minorities, whose cause, the senators noted, was championed last month at the Ministerial to Advance Religious Freedom, convened by the U.S. State Department.

“We were especially surprised to hear reports of the elimination or severe decrease in proposed refugee resettlement on the heels of the State Department’s Second Ministerial for International Religious Freedom, where survivors of severe persecution came to the United States to share testimonies of unimaginable human rights atrocities,” the letter reads.

“America has an obvious interest in demonstrating and promoting freedom of religion to the world, including accepting refugees who flee persecution because of their faith. In fact, the administration acknowledges the partnership between refugee admission and protection of inherent human rights in both the 2018 Report on International Religious Freedom and the 2018 Country Reports on Human Rights Practices.”

Faith concerns were at the center of the letter's argument in other ways. The letter was initially crafted by Sens. Chris Coons, D-Del., and James Lankford, R-Okla., a bipartisan duo that co-chairs both the weekly Senate Prayer Breakfast and the annual National Prayer Breakfast.

In an interview with Religion News Service, Coons explained his own concern for refugees and immigrants by invoking both his life experience and his faith.

“My own home church when I was a kid welcomed a refugee family from Vietnam,” he said. “This particular family had a remarkable and harrowing story … but my home church welcomed them. My mom and some of her closest friends were very active in helping them get an apartment, get clothes, get the kids in school, learn English. They came to worship with us regularly.”

Coons added: “To go from literally destitute refugees from Vietnam to people who are fully American and successful and engaged in one generation is a remarkable thing. But it's not unusual. It has happened hundreds of thousands of times all over the country.”

Faith groups have been vocal opponents of the Trump administration’s reductions of the nation’s refugee cap. Shortly after Trump took office, he lowered the number of refugees allowed into the United States from 110,000 to 45,000. The president later reduced the cap to 30,000 people, the lowest figure since the refugee resettlement program started in the 1980s.

The reductions have taken a toll on the nine groups that partner with the federal government to resettle refugees, six of which are faith-based. Most have faced significant office closures and staff reductions under the Trump administration as a result of the changes — including laying off employees who are themselves current or former refugees.

Others have expressed concerns about whether Trump has broken his pledge to assist persecuted religious minorities abroad. President Trump told the Christian Broadcast Network in 2017 that he would make helping persecuted Christians a priority of his administration, but admissions of Christian refugees have only reduced under his presidency.