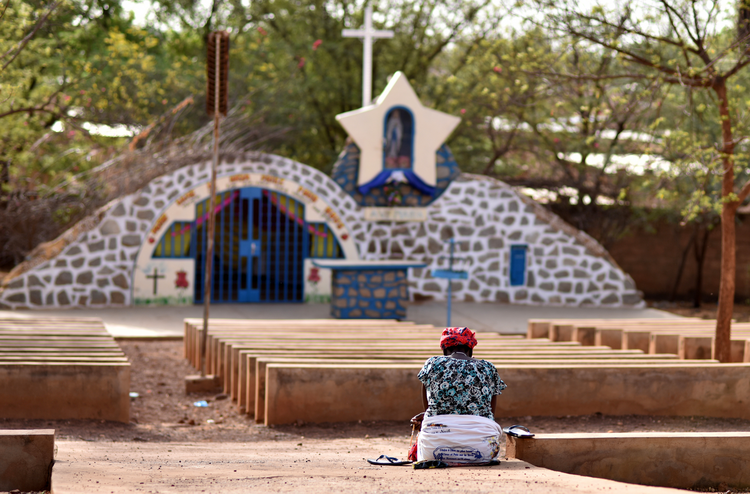 A displaced Christian woman prays in front of a grotto with a statue of Mary in Kaya, Burkina Faso, May 16, 2019. Bishop Laurent Dabire of Dori, president of the bishops' conference of Burkina Faso and Niger, has urged international action to stop the massacre of Christians by foreign-backed Islamist groups. (CNS photo/Anne Mimault, Reuters)

OUAGADOUGOU, Burkina Faso (CNS) -- A bishop leader in Burkina Faso called on the world to stop the massacre of Christians by foreign-backed Islamist groups that are "better armed and equipped" than government forces.

"If the world continues to do nothing, the result will be the elimination of the Christian presence," said Bishop Laurent Dabire of Dori, president of the bishops' conference of Burkina Faso and Niger.

"They've slowly moved into the interior of our country, attacking the army, civil structures and the people," he said of the nongovernment forces. "Today their main target appears to be Christians. I believe they are trying to trigger an interreligious conflict."

The appeal was published Aug. 1 by Aid to the Church in Need as nongovernmental organizations in the country launched a program to help 250,000 people displaced by attacks throughout the landlocked west Africa nation.

The bishop said 20 Christians had been killed in unprovoked attacks since January. He said in the most recent incident, June 27 in Beni, villagers were forced to lie facedown by armed attackers, who found four wearing crucifixes and killed them "because they were Christians."

"After murdering them, the Islamists warned the other villagers that they too would be killed if they did not convert to Islam," Bishop Dabire said.

"Insecurity is growing constantly and has forced us to reduce our pastoral activities. It is now too dangerous to go to some areas, and I've been forced to close down two parishes," he said.

The Catholic Church makes up a fifth of the 16.5 million inhabitants of Burkina Faso, whose government signed an accord with the Vatican July 12 guaranteeing the church's legal status and agreeing to "collaborate for the moral, spiritual and material wellbeing of the human person and for the promotion of the common good."

Christian places of worship, especially in the country's mostly Muslim-inhabited north, have been targeted by jihadist groups since the October 2014 ouster of President Blaise Compaore.

Speaking July 31 in Ouagadougou, President Marc Christian Kabore praised heads of neighboring states for helping combat terrorism, but he said Burkina Faso was "paying a heavy tribute" for the attacks, which were impeding "efforts at national construction."

In his ACN interview, Bishop Dabire said the mostly foreign forces had recruited local youths with "no money, no work and no prospects," as well as "radicalized elements" who saw jihadist movements "as the expression of their Islamic faith."

He added that he felt personally hurt by the inaction of the international community "to defend Christian communities" when Islamists were receiving outside support.

"The weapons they are using were not made here in Africa," the bishop said. "They have rifles, machine guns and so much ammunition, more than the Burkina Faso army, and when they come to the villages, they shoot for hours."