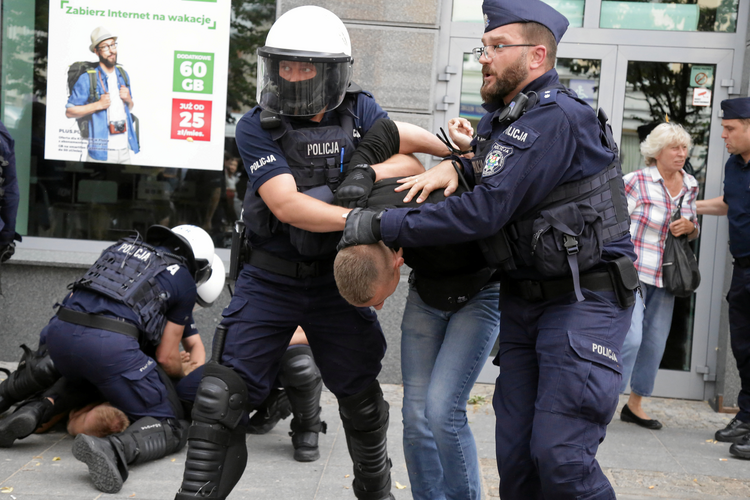 WARSAW, Poland (CNS) -- The president of the Polish bishops' conference condemned attacks on clergy and places of worship in the traditionally Catholic country as the church countered media accusations of inciting violence against LGBTQ groups.

Archbishop Stanislaw Gadecki of Poznan said that "ever more frequent attacks of hatred against believing people and priests" were a growing concern for church officials.

"So does the profanation of sacral buildings, places and objects of faith so important to Catholics," the archbishop said. "Although differences of worldview are evident in any pluralist society, they cannot justify such inhuman conduct."

His comments followed an assault July 28 on Father Aleksander Ziejewski in the sacristy of the Basilica of St. John the Baptist in the northern city of Szczecin during an attempted robbery.

"Although differences of worldview are evident in any pluralist society, they cannot justify such inhuman conduct."

Three men have been arrested in connection with the incident. Authorities said the attack occurred after the men broke into the basilica before evening Mass and demanded vestments to hold a same-sex wedding.

The incident was the latest in a wave of events that included the stabbing of priest at a church in Wroclaw and the parodying of Catholic rites and images of Mary by LGBTQ campaigners in Czestochowa, Gdansk, Krakow and other cities.

In a July 30 letter to Father Ziejewski, Archbishop Gadecki said "symbolic and physical violence" was escalating against Polish Catholics and called on "perpetrators to show restraint."

A dozen Catholic churches have been desecrated in the last two months across the country, according to the Krakow-based Polonia Christiana association.

However, she said that the church's "harshly negative reactions" to LGBTQ rights activists appeared to have raised the intensity of protests while church leaders had "continually portrayed LGBTQ demands as an assault on Christian culture and civilization."

In a July 29 statement the bishops' conference spokesman said the upsurge of attacks on Catholic sites was becoming "intolerable."

"In line with its Gospel summons, the church respects the dignity of every person without exception -- Catholics in Poland and around the world have a right to the same respect," Father Pawel Rytel-Andrianik said.

"We cannot fail to react to vulgar derision and lack of basic respect toward the beliefs of faithful millions hurt by these activities. We have a constitutional right to see a person's dignity respected and symbols of our faith protected," he said.

Meanwhile, Polish media commentators and representatives of LGBTQ groups accused Archbishop Tadeusz Wojda of Bialystok of inciting violence against a July 20 "Equality March" in the eastern city, during which police used stun grenades and pepper spray to hold back aggressive counterprotesters claiming to be protecting the Catholic cathedral.

In a July 26 analysis, Poland's Catholic Information Agency, KAI, confirmed that Archbishop Wojda, who later condemned the violence, had warned local Catholics weeks earlier about the march, but added that the use of rosaries and crosses by some anti-LGBTQ demonstrators had encountered "great distaste."

Father Andrzej Debski, Bialystok archdiocesan spokesman, said July 30 the Equality March had "unleashed actions of evil" on both sides, and rejected claims the church itself had "caused the aggression."

"Other Equality Marches this year in Warsaw, Gdansk and Poznan, organized in the name of tolerance and anti-discrimination, have shown just the opposite: the enmity of LGBT circles towards Christianity," Father Debski said in a KAI statement.

"Are we not seeing double standards at work," he said, "when sacred symbols are profaned during these parades, alongside blasphemies against God?"