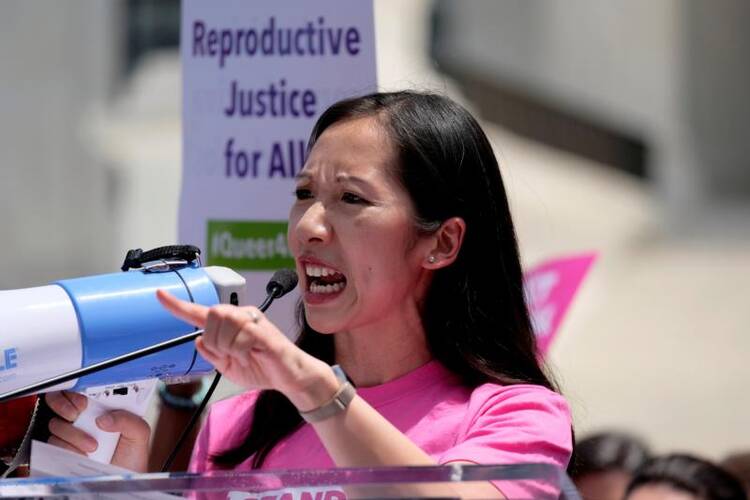 Dr. Leana Wen, then Planned Parenthood president, speaks at a protest against restrictions on abortion outside the U.S. Supreme Court in Washington May 21, 2019. Following the July 16 news of Wen's firing, pro-life leaders remarked that the organization was upset the physician had emphasized the need to expand Planned Parenthood services beyond abortion. (CNS photo/James Lawler Duggan, Reuters)

WASHINGTON (CNS) -- Following the news Dr. Leana Wen was fired by Planned Parenthood as its president, several pro-life leaders remarked that the organization was upset the physician had emphasized the need to expand Planned Parenthood services beyond abortion.

"Leana Wen entered Planned Parenthood to great fanfare. As a physician, it was anticipated that she would evolve the organization, long seen as a partisan platform, into a health care institution," said Catherine Glenn Foster, president and CEO of Americans United for Life.

"And when Dr. Wen tried to do precisely that, she was fired. She refused to allow abortion to dominate Planned Parenthood's agenda, all the way from the very top down to every talking point," she added in a July 18 statement. "Dr. Wen's termination is emphatic proof that Planned Parenthood has been, is and will be nothing more than a political machine."

Various news reports said Wen wanted to provide additional services such as mental health and substance abuse resources, but, according to Americans United for Life, "anonymous Planned Parenthood employees referred to these treatments as 'mission creep.'"

In a July 19 op-ed in The New York Times, Wen wrote: "In my farewell message to colleagues, I cited philosophical differences over the best way to protect reproductive health. While the traditional approach has been through prioritizing advocating for abortion rights, I have long believed that the most effective way to advance reproductive health is to be clear that it is not a political issue but a health care one."

She added, "I believed we could expand support for Planned Parenthood -- and ultimately for abortion access -- by finding common ground with the large majority of Americans who can unite behind the goal of improving the health and well-being of women and children."

Wen "discovered" that Planned Parenthood, she said, "is not now, nor has it ever been, a health care organization. (It) is an organization established to promote the humanist religion, to lead our young people to hell, and to make a lot of money along the way so it can buy influence with politicians and media."

Other reaction included a July 16 tweet from Abby Johnson, the former Planned Parenthood clinic director who became a pro-life activist. She is the author of "Unplanned," a book about her change of heart on the abortion issue that has been made into a major motion picture.

"Our job is to reach out to Dr. Leana Wen in love," Johnson tweeted. "Snarky memes & words will not bring about conversion. Let us also remember that she is a woman grieving the loss of a miscarried child. Let us treat her with care, not callousness. Let’s be the people we say we are."

Wen, who was Baltimore's heath commissioner before being hired by Planned Parenthood, has been public about having suffered a miscarriage in early July.

It's kind of what they do. Wen thought she could work with mushy middle. PPUSA is as politicized as NRLC and USCCB pro-life office. Neither side wants anyone to know that presidential elections have no impact on Roe, nor does either side want to upset donors by supporting a middle class level negative income tax for children.