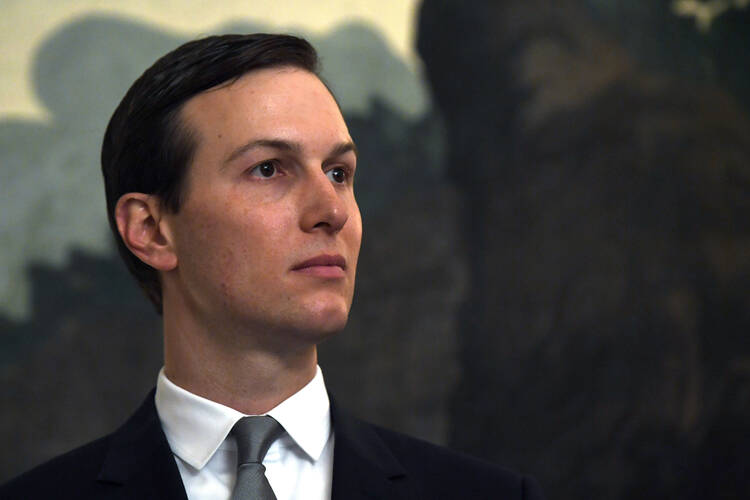 In this March 25, 2019, file photo White House adviser Jared Kushner listens during a proclamation signing with President Donald Trump and Israeli Prime Minister Benjamin Netanyahu in the Diplomatic Reception Room at the White House in Washington. Kushner will present the economic portion of his Mideast peace plan on June 25 in Bahrain, with some key players missing. (AP Photo/Susan Walsh, File)

BEIRUT (AP) — Lebanon's Parliament Speaker Nabih Berri said Sunday that the country will not be "tempted" by money into giving up Palestinian rights, criticizing the Trump administration's $50 billion investment proposal that comes as part of its recently unveiled Middle East peace plan.

Berri said in a statement carried by the state-run National News Agency that although Lebanon is currently dealing with an economic crisis, it would be a mistake to think that billions of dollars could convince the government to abandon Palestinians' rights as refugees.

The 10-year plan calls for projects worth $6.3 billion for Palestinians in Lebanon, as well as $27.5 billion in the West Bank and Gaza, $9.1 billion in Egypt and $7.4 billion in Jordan.

The large sums for Jordan and Lebanon, countries with substantial Palestinian refugee populations, were an apparent attempt to have them absorbed into these nations, rather than allow them to maintain their refugee status and the hope that they could someday return to their homeland in what is now Israel.

Many of the 175,000 Palestinians in Lebanon live in squalid camps with no access to public services, limited employment opportunities and no right to own property. Naturalizing Palestinians, the vast majority of whom are Sunni Muslim, would disrupt Lebanon's very delicate sectarian balance between the country's 18 religious sects.

President Donald Trump's senior adviser and son-in-law Jared Kushner faces high hurdles and low expectations as he looks to build support for the initiative ahead of a two-day conference in Bahrain later this week.

Palestinian leaders in the West Bank, angered by what they and their supporters see as blatant U.S. bias toward Israel, want nothing to do with the workshop and will not participate. The conference will also ignore the core political issues that are key to resolving the dispute, such as borders, the status of the holy city of Jerusalem, Israel's security and the fate of Palestinian refugees.

Berri said that Lebanon will resist, along with the Palestinians, the naturalization of Palestinians "through all legitimate means." He added that Palestinians should have the right to return to their land and set up a Palestinian state with Jerusalem as its capital.

"Mr. Kushner, Lebanon and the Lebanese will not be false witnesses for selling Palestine," Berri said.

Trump and his aides have refused to endorse a two-state solution to the conflict, a path that has long been seen as the only viable option for lasting peace.

The scheme, which calls for a mix of public and private financing and intends to create at least a million new jobs for Palestinians, was posted to the White House website.

Lebanon has already said it will not take part in the Bahrain conference. Jordan and Egypt, the only two Arab countries with peace deals with Israel, are sending mid-ranking officials from their finance ministries and not Cabinet ministers to Bahrain.

Christian legislator Nadim Gemayel also criticized the plan, saying in a tweet that the Lebanese did not give thousands of "martyrs" in order for Palestinians or others to be naturalized in Lebanon.

"The causes of people are not solved with money but by giving them rights, sovereignty and independence," Gemayel said.