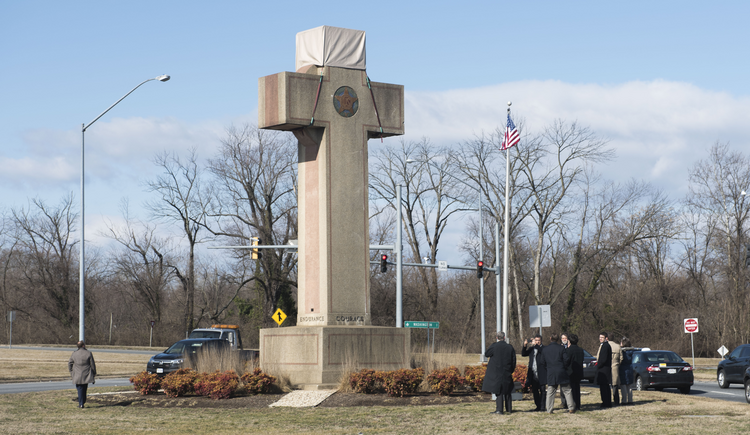 WASHINGTON (AP) — A World War I memorial in the shape of a 40-foot-tall cross can continue to stand on public land in Maryland, the Supreme Court ruled Thursday.

The justices, in ruling 7-2 in favor of the cross' backers, concluded that the nearly 100-year-old memorial's presence on a grassy highway median doesn't violate the First Amendment's establishment clause, which prohibits the government from favoring one religion over others.

The case had been closely watched because it involves the place of religious symbols in public life. Defenders of the cross in Bladensburg had argued that a ruling against them could doom of hundreds of war memorials that use crosses to commemorate soldiers who died.

"The cross is undoubtedly a Christian symbol, but that fact should not blind us to everything else that the Bladensburg Cross has come to represent," Justice Samuel Alito wrote.

"For some, that monument is a symbolic resting place for ancestors who never returned home. For others, it is a place for the community to gather and honor all veterans and their sacrifices to our Nation. For others still, it is a historical landmark. For many of these people, destroying or defacing the Cross that has stood undisturbed for nearly a century would not be neutral and would not further the ideals of respect and tolerance embodied in the First Amendment. For all these reasons, the Cross does not offend the Constitution," he wrote.

The cross' challengers included three area residents and the District of Columbia-based American Humanist Association, which includes atheists and agnostics. They argued that the cross, in a suburb near the nation's capital, should be moved to private property or modified into a nonreligious monument such as a slab or obelisk.

Defenders included the American Legion, which raised money to build the monument honoring area residents who died in World War I. Other backers included the Trump administration and Maryland officials who took over maintenance of the cross nearly 60 years ago to preserve it and address traffic safety concerns.

Maryland officials had argued that the cross, sometimes called the "Peace Cross," doesn't violate the Constitution because it has a secular purpose and meaning.

In the past, similar monuments have met with a mixed fate at the high court.

On the same day in 2005, for example, the court upheld a Ten Commandments monument on the grounds of the Texas Capitol while striking down Ten Commandments displays in Kentucky courthouses.

After those rulings and others the Supreme Court has been criticized for being less than clear in explaining how to analyze so-called passive displays such as Maryland's cross, that are challenged as violating the Constitution's establishment clause.

I am pleased for this ruling as it could be used as a stepping stone on the road to a more acceptable society. The concept of political correctness has given license to those who believe that discrimination should be abolished and that the means for doing so should be in the courts, but this concept defies and denies human nature. Discrimination is a natural defense tool for human beings. It is the first reaction to recognize that something is different, which could mean danger. The attempt to remove discrimination as a natural tool flies in the face of natural law and can only lead to confusion, which poses additional threats. There is another natural way to overcome the harm that discrimination may cause and that is to recognize the dignity of each human being. That does not mean that we have to agree with everyone we come into contact with, but it does mean that everyone else has the same dignity rights as we do. Such rights must be protected, unless they cause more harm than good. There is also a growing belief that individual rights are a private matter, but this also challenges natural law. Human beings, by nature, are supposed to coexist, a negligence that has probably caused all the wars that we have known. A challenge that is the root of salvation for society and the Second Christian commandment.