No country can solve Europe’s migration crisis on their own 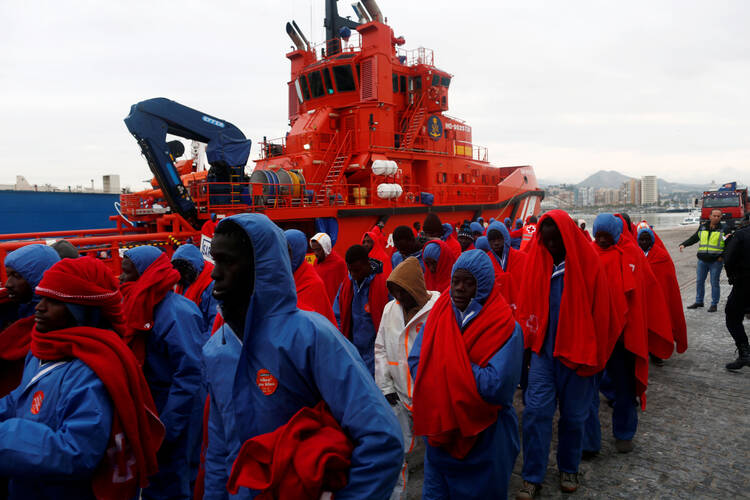 Migrants, intercepted off the coast in the Mediterranean Sea, walk after disembarking from a rescue boat Jan. 15, 2019, at the port of Malaga, Spain. Some 170 migrants were believed to have drowned in the sea in two separate shipwrecks in mid-January. "They were seeking a future" and "perhaps were victims of human trafficking," Pope Francis said during his Angelus prayer Jan. 20. (CNS photo/Jon Nazca, Reuters)

In my many years of service to the Sovereign Order of Malta, as grand hospitaller for 25 years and now as grand chancellor, I have come across countless moving stories. A nurse working for our Italian Relief Corps once turned to me in tears and told me about the impossible dilemma she faced during a rescue mission: In front of her were at least four people drowning in the Mediterranean Sea, and she knew immediately she could only save one.

Migration, whether prompted by economic factors or by wars, involves loss. People who migrate leave behind families, homes and traditions. There are many push-and-pull factors that have led 3.4 percent of the global population to move as of 2017 (with a total of 258 million international migrants), from natural disasters caused by climate change to political unrest, wars, poverty, persecution, human rights violations and limited economic opportunities. The world is witnessing an unprecedented prolongation of dozens of armed conflicts, a dire scenario that Pope Francis aptly describes as “a third world war fought piecemeal.”

It is also our duty to bring the principles of humanity and solidarity back into the narrative of migration.

Any humanitarian action to confront the migration crisis will be met with great difficulties, and as one of the oldest Catholic institutions in the world, it is the Order of Malta’s moral responsibility to find new approaches and methods to respond more effectively to the needs of communities in distress. It is also our duty to bring the principles of humanity and solidarity back into the narrative of migration.

If we want to manage the global and irreversible phenomenon of migration in a sustainable way, the U.N. Global Compact on Refugees is the most effective instrument we have. No country can act by itself to manage migration effectively.

The number of people around the world living outside their country of birth is expected to grow for many reasons, including population growth, increasing connectivity, trade, rising inequality, demographic imbalances and climate change. We believe that we should minimize the adverse drivers and structural factors that compel people to leave their country of origin. Disaster risk reduction and reconstruction, for example, are an integral part of the projects of our worldwide humanitarian relief agency.

In our long experience in integration projects for migrants in European countries, we have found that treating people with respect and dignity will only fuel positive responses.

We provide socio-medical assistance to persons in need, regardless of their nationality, ethnicity or religion, in a spirit of solidarity and generosity. We also support a welcoming environment, fostering access to services like education and health care to help migrants integrate into their new communities, taking into consideration cultural, linguistic, social and psychological elements, including values and traditions. The Order of Malta’s diplomatic relations with 108 states is an essential asset in ensuring the effectiveness of our humanitarian actions. We believe that international cooperation and global partnerships for safe, orderly and regular migration must be strengthened.

Here’s why every child at the border belongs to all of us
Leo J. O’Donovan, S.J.

There are many other logical reasons to argue against policies involving raised walls and sealed borders. (How can you possibly seal off the Mediterranean Sea?) The odious human trafficking trade is prompted by poverty and desperation, and migrants—often minors, often young women—are the foremost victims of a phenomenon involving over 24 million people worldwide. Militarizing borders will only lead to a militarization of the traffickers who seek even more perilous routes on which to smuggle people.

In our long experience in integration projects for migrants in European countries, we have found that treating people with respect and dignity will only fuel positive responses. On the other hand, marginalization and discrimination will lead to hostility and resentment. We must keep this in mind when dealing with migration flows if we want to safeguard our communities and prevent the formation of radicalized cells.

Most of all, it is our soul that cries out for pity and compassion. In Germany, we say that when you call out into a forest, the echo will come back to you. Likewise, it will be our souls, the souls of our nations, the soul of Europe, which was built on principles of peace and coexistence, that will be damaged if we do not urgently replace the hate-driven narrative of migration with a more humane perspective based on morality and brotherhood. 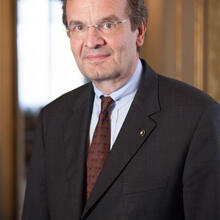 Albrecht Freiherr von Boeselager was admitted to the Sovereign Order of Malta in 1976. He was elected grand chancellor in 2014.

No country can solve Europe’s migration crisis on their own

The answer is for them to stay. It’s impossible for no more than a small percentage to relocate. http://bit.ly/2Itsb88
The author might want to ask why the migration? Just when Poverty is being eradicated from the world. What is driving 260 million people to want to move. And if they are successful will there be billions more behind them? What is different from where these people came and where they are going?

Wonderful to see the Knights back to their mission of hospitality.

Thank you for caring for our fellow man. All of us need to recognize this is our duty.