‘I have never heard of this level of inhumanity.’ Lawyers speak out about border detention site

‘I have never heard of this level of inhumanity.’ Lawyers speak out about border detention site 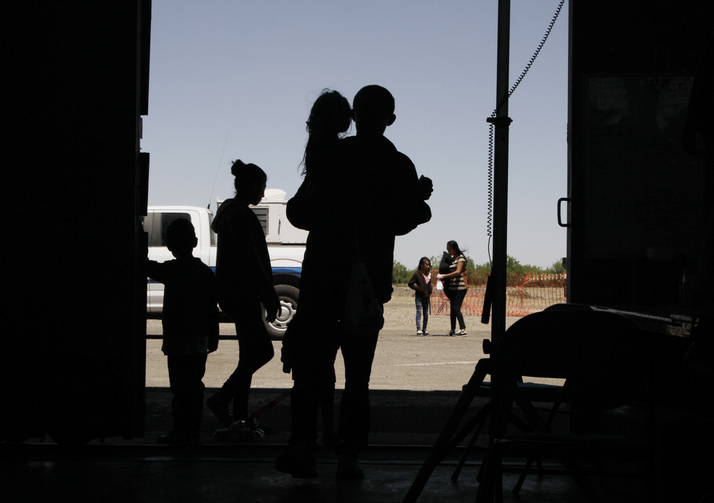 EL PASO, Texas (AP) — A legal team that recently interviewed over 60 children at a Border Patrol station in Texas says a traumatic and dangerous situation is unfolding for some 250 infants, children and teens locked up for up to 27 days without adequate food, water and sanitation.

A team of attorneys who recently visited the facility near El Paso told The Associated Press that three girls, ages 10 to 15, said they had been taking turns keeping watch over a sick 2-year-old boy because there was no one else to look after him.

When the lawyers saw the 2-year-old boy, he wasn't wearing a diaper and had wet his pants, and his shirt was smeared in mucus. They said at least 15 children at the facility had the flu, and some were kept in medical quarantine. Children told lawyers that they were fed uncooked frozen food or rice and had gone weeks without bathing or a clean change of clothes at the facility in Clint, in the desert scrubland some 25 miles southeast of El Paso.

"In my 22 years of doing visits with children in detention I have never heard of this level of inhumanity," said Holly Cooper, an attorney who represents detained youth. "Seeing our country at this crucible moment where we have forsaken children and failed to see them as human is hopefully a wake up for this country to move toward change."

The lawyers visited the facility in Clint because they are involved in a legal settlement known as the Flores agreement that governs detention conditions for migrant children and families. The lawyers negotiated access to the facility with officials, and say Border Patrol knew the dates of their visit three weeks in advance.

Many children the lawyers interviewed had arrived alone at the U.S.-Mexico border, but some of the kids had been separated from adult caregivers such as aunts and uncles, the attorneys said. Government rules call for the children to be held by the Border Patrol for no longer than 72 hours before they are transferred to the custody of Health and Human Services, which houses migrant youth in facilities around the country.

But many children interviewed by the lawyers said they were kept inside the facility near El Paso beyond 72 hours.

Customs and Border Protection did not immediately respond to the allegations about the conditions, but has said in recent weeks that it is overwhelmed and needs more money and help from the gridlocked Congress.

The allegations about the conditions inside the El Paso facility are the latest complaints about mistreatment of immigrants at a time when record numbers of migrant families from Central America have been arriving at the border. Government facilities are overcrowded and five immigrant children have died since late last year after being detained by the U.S. government. A teenage mother with a premature baby was found last week in a Texas Border Patrol processing center after being held for nine days by the government.

The Trump administration has been scrambling to find new space to hold immigrants as it faces withering criticism from Democrats that it's violating the human rights of migrant children by keeping so many of them detained.

The headline is absurd. The authors should get around more. Go to Venezuela and see what Church recommendations have wrought.

This is just another Trump hit piece. They fail to ask why these children are there and who encouraged them to come. These encouragers might be the real culprits. And by failing to do this are the authors equally guilty of the bad conditions going on?

Trump hit piece?!? It’s about basic human rights and decent treatment of immigrants from an immigrant country. It’s absurd that we US Americans, and especially European US Americans, feel so smug labeling immigrants as undesirable when most Europeans that arrived here were either poor and undereducated or were prisoners, thieves, rapists, and murders or some combination of those and used America as their fresh start. The majority of the brown people in these modern day internment camps are actual Americans whose ancestors lived in this part of the world for thousands of years. There’s not a single European American that can make that claim!

And nobody needs to tell these people to come. Do you really think that the floods and droughts that have impacted the US over the last few years were limited to just here? As climate change intensifies, so will the negative impacts on families around the world. Not to mention, the meddling this country has had in the governance of Central & South American countries since Teddy Roosevelt’s days. Do you really think that the US should be permitted to cause havoc in those countries and then bear only the extremely limited responsibility it wants to take when the negative results of those policies show up at its door? Only a hypocrite or a fool would believe so.

Trump and his followers have not only violated Human Rights Laws and decency, but they have violated the teachings of Christ’s compassion and generosity. They are a stain on America and humanity.

Yes, a Trump hit piece. And you just verified it. Thank you. Like the authors you show no interest in the individuals at the borders than the authors did. The children are pawns in a political game and that’s what one should be upset at.

Wasn't it Jesus who said, "These kids don't deserve to be treated humanely because their parents did something that some people disapprove of." ?

Absurd headline? The narrative of what these lawyers witnessed matches the reference of "inhumanity" referenced in the title. To seek to help desperate refugees in a secure way is not sentimentality. It’s humanity.

Yes, a Trump hit piece. People who encourage illegals to come here and get everything for free without following the legal process to citizenship, but refuse to update the process are the culprits.
I have yet to see one article here that offers praise for any of the good things that President Trump has accomplished. And these accomplishments have happened despite the constant harassment that seems to be the only thing that the Democrats are willing to do these days.

This article is pretty much fact based. If you think it's a Trump hit piece, that suggests you think he's more at fault than this suggests, since it merely suggests the administration is having problems with capacity. As a founder signatory of the Universal Declaration of Human Rights, the US should be a beacon of good practice in the treatment of these kids. And we've heard often about how much you all care about babies before they're born. These kids have a heartbeat too you know.

Fact based? Cherry picking actually. If one really cared about the children one would wonder why they are there and who is encouraging them to be there. Maybe it is the encouragers who are most to blame. Since it’s impossible to take care all who would come why select these few. Maybe it’s better to address the issue where they originated. They come from countries that espouse Catholicism. Are they fleeing those who promote Catholicism?