The Editors: The church and state can still learn from each other 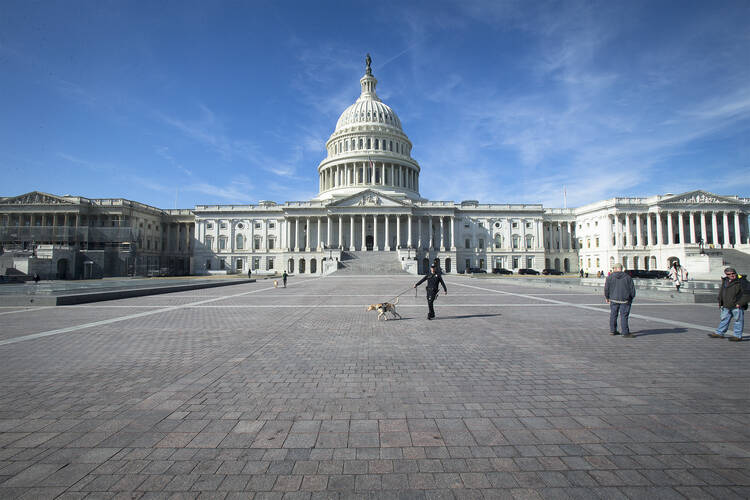 Religious liberty and the relationship between church and state are two issues that have long vexed the Catholic Church, particularly since the Enlightenment. Less than two centuries ago, Pope Gregory XVI condemned freedom of conscience as an “absurd and erroneous maxim,” called freedom of the press “a hateful freedom” and declared the notion of separation of church and state anathema in his encyclicals “Mirari Vos” (1832) and “Singulari Nos” (1834). Half a century later, Pope Leo XIII’s “Testem Benevolentiae” (1899) condemned Americanism, his label for a loose collection of heresies that included separation of church and state, freedom of speech, ecumenism and the belief that democracy was universally applicable to all cultures.

Despite a long and ugly history of anti-Catholic bigotry in the United States, Catholicism in this country has benefited from the religious and legal protections provided by our system of liberal democracy, particularly in the many decades when Catholic teachings or convictions ran contrary to those of the mainline Protestant majority. The Catholic school and hospital systems, two significant achievements of a minority religion in sometimes hostile territory, are among the best examples of Catholicism’s flourishing under the American project.

The Catholic school and hospital systems...are among the best examples of Catholicism’s flourishing under the American project.

In recent years, however, the rise of secularism, along with encroachments on the efforts of Christians to put their convictions into practice in the public square (again, health care and education offer good examples), has caused many Catholic scholars and pundits to argue that classical liberalism itself may be detrimental to religion at best and actively hostile to it at worst. Meanwhile, the rise of nationalist populism in the United States and internationally seems to reveal a basic instability in liberal democratic systems.

At polar extremes in these debates among opponents of liberalism are claims that faithful Catholics need either to withdraw from public life and order their own communities separately or to seek explicitly to reorder public policies to a specifically Catholic vision of the good. These arguments are important insofar as they remind Catholics that the church has existed and will continue to exist under a wide variety of political regimes—and they highlight the need for Catholics to explain to our secular neighbors why the “common good” requires a shared moral order and cannot be reduced to the sum of individuals making autonomous choices. These insights are also important for understanding how nationalist passions are being mobilized to exploit fragilities and weaknesses in secular liberalism.

These debates, however, run the risk of neglecting what the church itself has learned from the experiences of liberal societies—the United States in particular—and has adopted into its own magisterial teaching. “Dignitatis Humanae,” the Second Vatican Council’s declaration on religious liberty, opens with the recognition that “a sense of the dignity of the human person has been impressing itself more and more deeply on the consciousness of contemporary man” and says that the council declares these desires “to be greatly in accord with truth and justice,” inspiring deeper reflection on the tradition and doctrine of the church. These developments would not have been possible without John Courtney Murray, S.J., whose work before and during Vatican II contributed both to the Catholic Church’s understanding of the importance of religious liberty for a free acceptance of the true faith and American Catholics’ understanding of the church’s role in helping even secular society grow in holiness.

The project of liberal democracy, even with its many flaws, has helped to develop many goods.

In We Hold These Truths: Catholic Reflections on the American Proposition (1960), Murray noted the genius of the U.S. Constitution, which he identified as born out of “a theory that is recognizably part of the Christian political tradition, and altogether defensible in the manner of its realization under American circumstances.” In other words, there is a consonance between the church’s life in the world and limited government control over religion and “the distinction between state and church, in their purposes, methods, and manner of organization.”

Murray also saw how American religious liberty empowered the church as an active player in U.S. political and cultural life. In an article in Theological Studies in 1966, Murray wrote that “the church defines her mission in the temporal order in terms of the realization of human dignity, the promotion of the rights of man, the growth of the human family towards unity, and the sanctification of the secular activities of this world.”

Of course, Murray is not beyond criticism, and his mid-20th-century synthesis of American political insight with the Catholic natural law tradition is not guaranteed to answer all the questions that can be posed today. In particular, Murray did not foresee how many of the issues that divide the American political community—as well as the internal life of the church in the United States—would involve partisan mobilization along moral lines. Nor does Murray’s thought offer sufficient resources, on its own, for critiquing and resisting the tendency of the modern state to subordinate all other forms of community, including religion, to itself.

While Murray’s insights may not directly answer the questions American Catholics face today, discarding them without conserving what the church has learned from them would leave us even worse off. The project of liberal democracy, even with its many flaws, has helped to develop many goods (including some the church initially resisted): freedom of conscience, women’s suffrage, racial equality, protections for workers and children, participatory democracy and pluralism without sectarian violence. The church need not endorse every aspect of classical liberalism, but Catholics would do well to recognize that our own tradition has been deepened and enriched by these experiences and challenges. We should not presume that the church has finished learning from the project of liberal democracy—nor it from the church.

This is really an interesting piece, but I suppose I''m missing something, it seems to be a response to some larger argument that's afoot - one the editors are engaged in some manner and the simple minded reader is remote from. Though it's a wonderful piece that opens a couple, if not several doors allowing all of us muddied dogs to scamper through the house, a precise context is missing, and as a result the poor untrained reader is left to leap from couch to chair to carpet enthusiastically overwhelmed with enthusiasm but no real sense of the point. Yes, the Church and liberal democracy can both be vehicles for the 'good', and they may create some necessary balance on human life - but, doesn't all order, moral or practical? What is the point, what is the question, what is that you see, what overriding question are you acknowledging the existence of, what fascinating discourse are you engaged in that this piece is a response? The uninformed, or misinformed, or uneducated reader might find some enrichment and deeper comprehension of the looming threat that you obviously see on the horizon with a little less vagary on the editors' part. In short, a little specificity is wanted.

There is a pathway for the Church to navigate that is consistent with its mission but for most of its existence has avoided it. That is classical liberalism of limited government and individual freedom but Catholic morality and salvation as the personal objective. But power is too addictive and the worldly Church always succumbs to it. As a result the Church has become insignificant when it should be paramount.

For most of its existence the Church espoused an oppressive political doctrine called “The Great Chain of Being” which subjugated nearly everyone to the elites of the world and kept the masses in extreme poverty. Now it is advocating an equally bad theory that of equality which also causes extreme poverty. Again it will be governance by the elites. The Church never seems to learn how God made us desiring freedom but needing morality to guide us to His end not a worldly one.