America’s Theologian: An archive of articles by John Courtney Murray 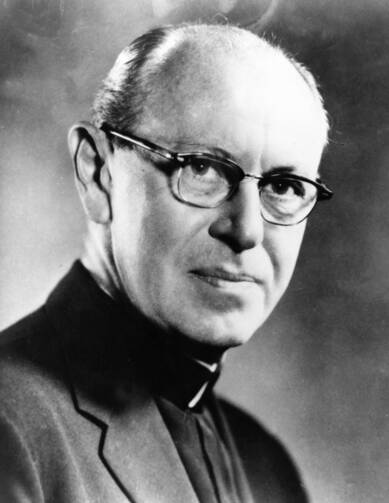 In light of the continuing debate about the legacy of John Courtney Murray, S.J., we offer here an archive of articles by the noted American theologian. Murray wrote extensively on what the church could learn from the U.S. experiment in democracy and religious liberty. At times, his writings reflected "a faith in American exceptionalism and goodness so prevalent in the United States after World War II" (Am., 2/7/2005). Murray served as an associate editor at America and later as peritus at the Second Vatican Council.

For additional articles by Murray, visit this collection at the Woodstock Theological Center, compiled by Leon Hooper, S.J.

"The Declaration on Religious Liberty: Its Deeper Significance"(pdf), April 23, 1966

John Courtney Murray
Show Comments (
3
)
Comments are automatically closed two weeks after an article's initial publication. See our comments policy for more.
Chris NUNEZ
12 years ago
MANY THANKS for reprinting these fine articles. As it happens, there's a nice little discussion brewing at UCSC within the University Interfaith Council: whether to allow the Secular Student Alliance join the organization or not.
Pope Benedict has been addressing the subject of dialogue with much urgency this past month, pointing out that the right to religious freedom extends to both the believer and the non-believer.
This treasure trove of John Courtney Murray, S.J.'s writings on Religious Freedom is timely and timeless.
THOMAS REESE
10 years 11 months ago

Leon Hooper, SJ, director of the Woodstock Theological Center Library, has posted the works of John Courtney Murray online at:

Ronald Grace
10 years 11 months ago
Thanks!!!  Anything Murray wrote is a treasure... I'm very grateful to you for making these available!