What’s behind the shifts in South Africa’s latest election? 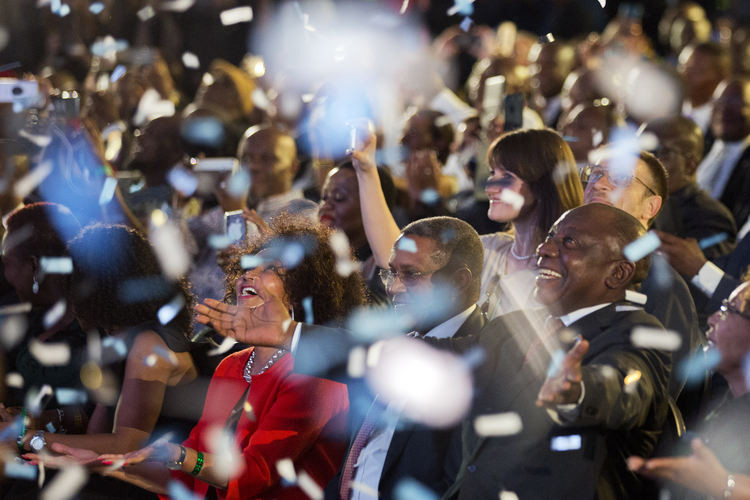 South Africa President Cyril Ramaphosa, right, celebrates after the Independent Electoral Commission announced the final results in South Africa's general election in Pretoria, Saturday, May 11, 2019. South Africans voted Wednesday (May 8) in a national election and results show that the ruling African National Congress party (ANC) has won the national elections but has seen its share of the vote drop significantly. (AP Photo/Jerome Delay)

Though the general election on May 8 kept the ruling African National Congress in power with what most democracies would consider a sizeable majority of the popular vote, observers in South Africa believe that the nation’s oldest party has grounds for concern about the outcome. But the election was also a wake-up call for the official opposition, the Democratic Alliance.

The official results reveal a drop in A.N.C. popularity across the country. Although it got 57.5 percent of the national vote (and 230 out of 400 National Assembly seats, enough to form a government without a multiparty coalition), the tally represents a decline of five percentage points from the 2014 election. Results for provincial legislatures revealed similar drops in popularity: There were declines of nine percentage points for the A.N.C. in Free State, seven points each in Mpumalanga and Northern Cape, and five points in North West. These mostly noncoastal provinces are considered A.N.C strongholds.

In Gauteng, which includes the cities of Johannesburg and Pretoria, the A.N.C. fell by only 3.5 points, but that brought the party to a bare majority of 50.2 percent. And it lost the Western Cape Province, which includes Cape Town, for the third consecutive election, falling to 28.6 percent.

Though no doubt delighted by the decline of the A.N.C. (which in 2004 had earned a historic high of nearly 70 percent of the popular vote), the Democratic Alliance had little to crow about. Falling by about 1.5 points to 20.8 percent of the national vote, it remains the official opposition but faces the fact that the next largest party in Parliament—the populist left Economic Freedom Fighters (E.F.F.)—has almost doubled its support in five years.

Moreover a small party on the right, the Freedom Front Plus, went from less than 1 percent of the vote to 2.4 percent.

What are reasons for these shifts? Let us look first at the opposition parties.

The results mirror the racial composition of South Africa: The combined vote for the A.N.C., the E.F.F. and the Inkatha Freedom Party (I.F.P.) was roughly 72 percent, or almost the same as the share of the population who identify as black. The D.A. and Freedom Front garnered almost 24 percent. One can conclude that the attempt of the center-right D.A. to make inroads into the black middle class has failed and that it has even lost some support to the right. The reasons for the former are clear: internal party tensions that often took on a racial tone and alienated potential new black voters. At the same time, the D.A.’s attempted slight shift toward social democracy and away from free-market liberalism may have alienated some white supporters.

The Founding Father: Nelson Mandela and the re-creation of South Africa
Anthony Egan

A Country in Transition: South African elections 20 years after the end of apartheid
Russell Pollitt, S.J.

Whatever the reasons, the net effect is that the D.A. now appears politically moribund, even as the A.N.C. seems in decline.

The big winner among the opposition parties was the E.F.F. As a party of youth and the poor, it maintains a radical call for the redistribution of wealth as well as a ferocious hostility to former President Jacob Zuma. The E.F.F. has doubled its support in two elections, particularly in urban areas. It expresses—loudly—the feelings of South Africans who believe that democracy has been subverted by corruption in the A.N.C. and by the failure to create greater social equality in the country. And it may have performed even better had participation been higher among younger voters.

As for the “winning” A.N.C., it is fair to say that the party was lucky. Before the election, some political analysts thought it might slip below 50 percent and be forced to form a coalition government. One South African political scientist, Leon Schreiber, even wrote a book speculating how such a coalition government might emerge, possibly even uniting the D.A. and the E.F.F.

Still, the message is clear for the A.N.C.: The country is not happy. The party’s electoral slide is clearly the result of the corruption that was pervasive in the government of Jacob Zuma and his faction within the A.N.C. The message to Mr. Zuma’s successor, President Cyril Ramaphosa: Clean up your act.

Many ask how Mr.  Ramaphosa can do this, given that supporters of Mr. Zuma remain in high office—in government, in parliament and in the leadership of the party itself. As the leader of a party almost evenly split between his supporters and those of Mr. Zuma, Mr. Ramaphosa has so far proceeded cautiously.

While the Commission of Inquiry Into Allegations of State Capture, still in process, has revealed a vast network of corruption in government, systematic prosecutions have not yet occurred. But having won the election, even with a reduced margin, Mr. Ramaphosa has a popular mandate to proceed.

A number of church and civil organizations have already encouraged him to act quickly, including removing those implicated in corruption from his new cabinet (yet to be announced). But whether he can do this without splitting the A.N.C.—or even being removed by the party leadership, as happened with former President Thabo Mbeki—remains to be seen.

If Mr. Ramaphosa does nothing, however, the impact on the country will be potentially disastrous. It could even be, based on the election performance we have just seen, the beginning of the end for the African National Congress.

Anthony Egan, S.J., is one of America's Johannesburg correspondents.