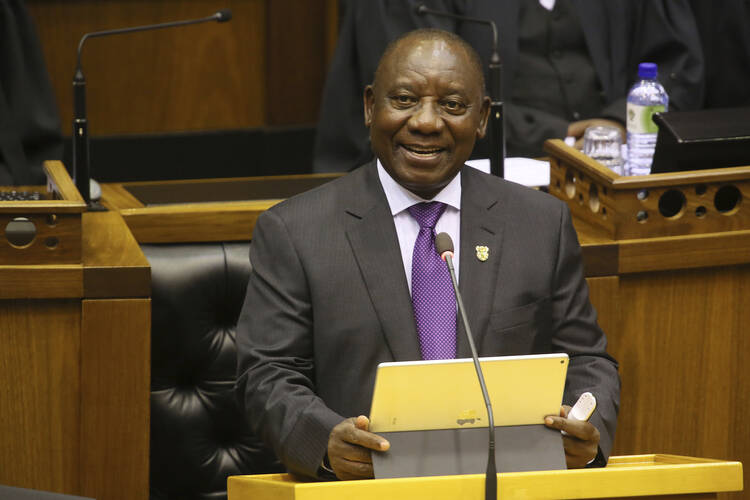 Since his rousing State of the Nation address—in which South Africa’s new president Cyril Ramaphosa quoted the song “Thuma Mina” (“Send Me”) by the recently deceased South African jazz icon Hugh Masakela—the country has been gripped by “Ramaphoria.”

Just weeks ago Jacob Zuma’s resignation ended a disastrous eight-year presidency. The former president stands accused of essentially selling the South African state to a wealthy Indian family, the Guptas. He faces some 783 charges of corruption, racketeering and money laundering.

Now Mr. Ramaphosa has brought hope to an embattled nation, assuring in his speech that the country now welcomes a “new dawn.”

Since his rousing State of the Nation address, the country has been gripped by “Ramaphoria.”

But one man cannot fix all the problems of South Africa. And it must be remembered that just as the African National Congress has produced Mr. Ramaphosa, it had also nurtured Mr. Zuma. It continued to support him even when it was clear he was involved in criminality and even after South Africa’s highest court ruled that he had failed to uphold the Constitution and had unduly derived personal benefits from holding the highest office in the land.

After fighting to stay in office, Mr. Zuma finally resigned on Feb. 14 amid increasing internal party pressure. Despite numerous calls from opposition parties and other civil leaders for Mr. Zuma to step down, for years the A.N.C. had fought for him and shielded him. Indeed, days after Mr. Zuma was removed from the presidency, the new secretary general of the A.N.C., Ace Magashule, denied at a press conference that the former leader “has done anything wrong.” Mr. Zuma’s lawyers have had great success at keeping him out of court, but the best one can say for him is that no verdict has yet been returned.

The new secretary general of the A.N.C. denied at a press conference that Jacob Zuma “has done anything wrong.”

The A.N.C. has not been honest about why it finally decided to recall the president. The country was told, officially, that the party did not want “two centers of power,” that is, Mr. Ramaphosa as A.N.C. president and Mr. Zuma as the country’s president. (The president of the ruling party is normally the president of the country, but there is a one-year gap between the A.N.C. leadership election and the national presidential election. Mr. Zuma was in Mr. Ramaphosa’s position in 2008, using his position as party chief to move President Thabo Mbeki aside in 2008.) The party has downplayed internal divisions, the corruption charges against Mr. Zuma and the fact that the country’s economy is in the worst shape it has even been since the dawn of democracy.

While Mr. Zuma ruled with impunity, Mr. Ramaphosa served as his silent deputy, distancing himself only when he saw a chance to prevail at last year’s A.N.C. conference. Now, though Mr. Ramaphosa has reshuffled the presidential cabinet and removed some of the most notoriously corrupt ministers from Mr. Zuma’s reign, other poorly performing ministers have been kept on. This could be a signal that the A.N.C. still does not have the best interests of the country at heart.

The bottom line is that the A.N.C. has taken no responsibility for the wrecking ball they released on the country in the form of Jacob Zuma. To the contrary, many A.N.C. leaders, including Mr. Ramaphosa, continue to laud Mr. Zuma. They do so even though South Africa has been downgraded by international credit ratings agencies, unemployment is at an all-time high, crime has spiked, race relations have deteriorated, corruption in government is widespread, the revenue service has failed to collect a substantial amount of tax, and the education and health sectors are failing ordinary people.

Mr. Ramaphosa seems to have the best intentions and he needs to be given a chance, but South Africans cannot pretend that everything is now in order. Like Jacob Zuma, Cyril Ramaphosa is a product of the A.N.C., the organization ultimately responsible for the mess that the country is in. The party owes the country an apology. A very cautious optimism seems to be the only sensible attitude for South Africans just now.

It will get much, much worse. Look to the former Rhodesia, for which agricultural production has collapsed, as the model. Ramaphosa and the ANC are militating for seizure of white-owned farms without compensation.