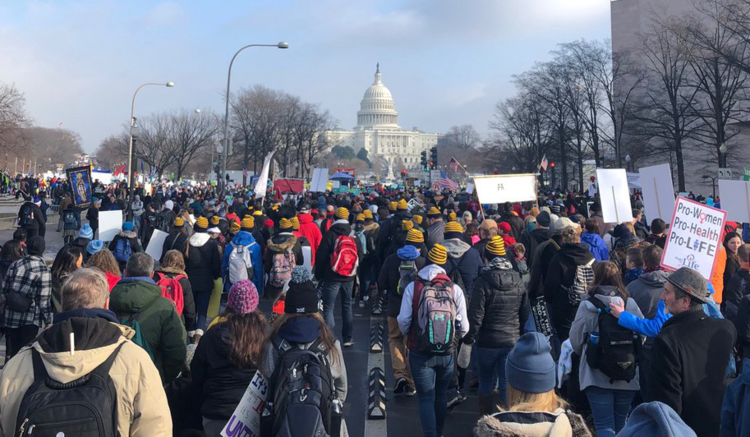 MONTGOMERY, Ala. (CNS) -- By passing a bill to ban abortion in nearly all circumstances, the Alabama Legislature has recognized that abortion is "the extinguishing of a unique human life," said the president and CEO of Americans United for Life.

"From conception to natural death, every single human life deserves to be protected by law. The violence of abortion is never the answer to the violence of rape," said Catherine Glenn Foster in a May 15 statement. "Like other states that have passed laws concerning when life begins, Alabama has relied upon scientific and medical facts."

The state Senate passed the measure late May 14 in a 25-6 vote. It includes exceptions for when the life or health of the mother is seriously threatened and when the child has a fatal disease. It bans abortion in all other circumstances, including rape and incest, and would make performing an abortion at any stage of pregnancy a felony punishable by up to 99 years in prison.

It now heads to Republican Gov. Kay Ivey, who has not stated publicly if she will sign it. The state House of Representatives overwhelmingly approved it in early May.

If the bill becomes law, Alabama will have the most restrictive abortion law in the country. Legal challenges that are expected to be filed swiftly also could "become fodder for the swirling debate over if -- and when -- the Supreme Court might consider overturning the landmark Roe v. Wade ruling," CNN reported.

Republican state Rep. Terry Collins said after the vote that bill was meant to challenge Roe v. Wade and protect the lives of the unborn, "because an unborn baby is a person who deserves love and protection."

Afterward, he was quoted as saying the state and supporters of the measure "ought to be ashamed" Singleton added: "Women in this state didn't deserve this. This is all about political grandstanding." Other opponents called the bill cruel and a "war on women."

Marjorie Dannenfelser, president of the Susan B. Anthony List, a national pro-life group, called passage of the near-total ban on abortion "a landmark victory for the people of Alabama who, like most Americans, overwhelmingly reject the extreme status quo of abortion on demand imposed nationwide by Roe v. Wade."

"Across the nation there is growing momentum, informed by science and compassion, and spurred on in reaction to abortion extremism in New York and Virginia, to recognize the humanity of the unborn child in the law," she said.

"It is clearer than ever that Roe is far from being settled law in the eyes and hearts of the American people, and this is increasingly reflected in state legislatures," she added.

They're not prolife. They are pro fetus. The hell with people after they're born.

In this America, rapists can have children with their crying daughters who just had their first menstrual periods; their students; their Uber passengers; their Catholic parishioners; their patients; their screaming, fighting wives; their prisoners; their sister soldiers; their sister Catholic Religious women and nuns; the woman with schizophrenia who lives every day fighting to ignore cruel internal voices who tell her to kill herself; their passenger , the migrant onion farm worker arrested by ICE; their 15 year old cousins and their sisters; the unhoused, mentally ill women sleeping under the bridge you drive pass every morning: strangers they chase into dark alleys with guns; and Jean Vanier's housemates at L'Arche.

So, they finally drop the mask, the pretense that pro-life people actually care about women, because now they believe they have the power, with Trump and his suck-ups on the Supreme Court, to crush women back into submission. This won't work, it will instead cause a backlash against the woman-hating Republican party and the pro-lifers who are a part of that.

As I said here a few times, the so-called pro-life supporters are either lying or hypocritical. They are only pro-birth. If they are pro-life, why they don’t advocate policies to change the current situation where America is the riskiest of all the advanced countries for pregnant women? Are they willing to accept higher tax and spending to help women in all stages of pregnancy from prenatal to postnatal and child care?

If not, then all the talk about anti-abortion is just empty, fake, and only serves as an exploitation scheme to get votes from the “religious” or “devout” believers.

I really hate abortion and consider it a grave sin in front of God. However, outlawing it in the manner of the Alabama bill is too extreme even for a fundamental Christian like Pat Roberson.

At best, the pro-life leaders are trying to look busy to justify their fundraising. At worst, they are trying to bring back the state power regime of Plessy, junking everything from Latino rights and desegregation to gay marriage This is a reactionary feature, not a flaw.

I think it will be especially beautiful when children are born after their mothers are raped. Oh how the Lord will bless the rape victims, especially the little girls and the disabled women! It will be a beautiful tribute to God. And the 25 men in Alabama who make captives of pregnant rape victims! Bless them! Bless them! Babies born of thirteen year old girls and their grandfathers! Isn't it beautiful! And bless all the Catholic families all over the country who are going to adopt babies born of unhoused chronically mentally ill women and and the men who rape them! I know --- I just know --- that the prolife community is putting their names and their bank accounts on lists to support these captive vessels we used to call women. Bless them! Bless them! I see God's hand in all of this! And you Catholic priests! You have done God's own work! Imagine the beautiful beautiful baptisms with mommies who are only 13 years older than their newborns who are the result of the mommies being raped by their fathers, brothers, uncles, teachers and priests! Oh I see the hand of God in that! What faithful servants you are! Won't it be gorgeous to see new life blossoming under the pregnant habit of Sister who was raped? God BLESS you! Thank you for your leadership! Oh the works of mercy for your prolife committee! Baby showers in prison for women raped by prison guards! A darling nursery at the adult group home for the 22 year old intellectually disabled women who was raped by a worker at the sheltered workshop where she counts screws, 20 per bag, into ziolock baggies. Knitting groups to make little red white and blue booties and sweaters for the babies of soldiers raped while on deployment! Now THAT will be write-up in the diocesan paper: babies AND patriotism!!! Carseats so rape victims can transport their babies to mental health treatment! So beautiful! The Lord's work. You will be the star of your deanery! God bless you!

PS. Dont forget the prayer chain for trial days when the pregnant victim testifies against her rapist. SUCH an opportunity for deep prayer. Maybe the prolife committee can provide a "new father gift" since daddy will be seeing his baby's mommy's growing belly for the first time in the court room. What a wondrous day for the new family God so loves!

One does wonder about the sincerity of the citizens of Alabama on “pro-life” issues when these facts are considered:

There are 46 hospitals in Alabama that offer obstetrical care, but they exist in only 29 of Alabama's 67 counties

There are 6,370 children in Alabama's foster-care system, ….176 children have foster parents and are awaiting adoption. Another 283 foster children are hoping to be adopted but have 'no identified resource,'

Wow, now prominent Republicans like Romney, Meadows and even Trump are repudiating the Alabama anti-abortion law, but America magazine is for it. And you wonder why women are leaving this church.