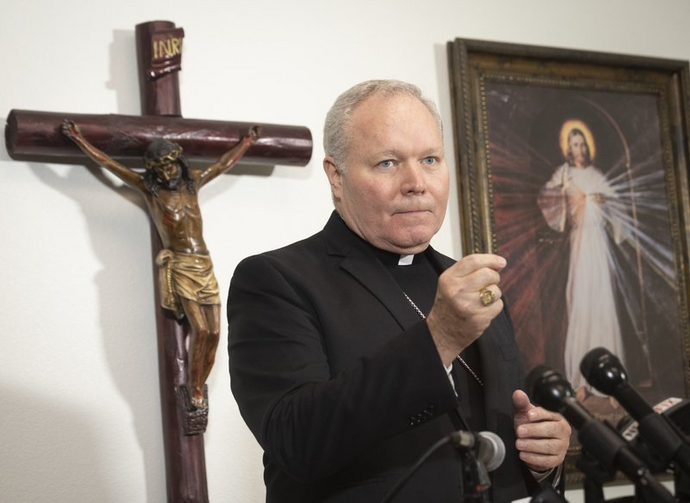 FILE - In this Aug. 19, 2018, file photo, Bishop Edward Burns addresses the media during a news conference at that St. Cecilia Catholic Church in Dallas. All 15 Catholic dioceses in Texas will release early next year the names of clergy who have been "credibly accused" of sexual abuse of a minor, the Diocese of Dallas said in a statement Wednesday, Oct. 10. (Rex C Curry/The Dallas Morning News via AP, File)

DALLAS (AP) — Police searched the offices of the Catholic Diocese of Dallas on Wednesday after an investigation into child sexual abuse allegations against a former priest uncovered claims against others, a police commander said.

Investigators searched the diocesan headquarters and also a storage unit it uses and the offices of a church, police Maj. Max Geron told reporters.

"We believed at this point that the execution of the search warrants was wholly appropriate for the furtherance of the investigation at this point," Geron said.

The events began last August with the investigation of Edmundo Paredes , a former priest who is believed to have fled Texas following claims that he abused three teenagers. That investigation resulted in allegations of abuse by others, Geron said.

A copy of the warrants obtained by WFAA-TV refers to the 70-year-old Paredes and four others. All five were named in a report released in January by the diocese that identified former priests credibly accused of sexually assaulting a child.

Paredes is suspended from the diocese; the other four are suspended, on leave, retired or stripped of clerical duties.

Geron declined to release details on the suspects, potential victims or when abuse may have occurred. He said Wednesday's search was meant to turn up documentation or data concerning the allegations against the men.

A spokeswoman for the diocese, Annette Taylor, said it has been cooperating with investigators.

But Detective David Clark said in the warrants that police had not been given all the "priests' files flagged for sexual abuse."

The group Survivors Network of those Abused by Priests, or SNAP, released a statement commending police with raiding the "secret archives" of the diocese.

"Institutions cannot police themselves and it is only through strong action from law enforcement that the full truth of their scandals can be revealed," the statement said. "We applaud the move and hope that it will inspire others who saw, suspected or suffered clergy sex crimes or cover ups in Texas to make a report to law enforcement officials immediately."

This is why complaints are and should be turned over to civil authority and not church authority. Will the horrors of this continuing sin never end?

I have no idea if this action was warranted but I wonder to what extent the police have been as anxious to do the same to the Baptist Church, the Boy Scouts, and public schools among others who have also had similar problems?

Mr Keyes--why do people like you always show up at an inquest and ask "who else died?" Perhaps these other institutions were more forthcoming about their own criminal abusers? Perhaps they did not have an elaborate machinery of collusion and cover-up directed by a central authority (the Vatican) like RCC does?. Perhaps the police found these other groups to be more cooperative than RCC? . You are not so subtly accusing the police of engaging in Catholic bashing, so I would like to know who is paying you to keep pushing this kind of Catholic apologia that insults everybody's intelligence. You belong to the sour grapes club that would like us to believe that RCC is being singled out for discriminatory treatment. Not only is that an insult to victims of Catholic clergy abuse, but it is a brazen attempt to downplay the seriousness of Catholic criminality--unless you are bold enough to shamelessly declare that "our criminals are no worse than their criminals". Please crawl back under your rock.

Art, your analysis is overwrought by half.

Fred - The police have and are investigating those other institutions where sexual abuse has been found. The difference between them and the Catholic clergy is that the clergy vowed to be the moral and ethical leaders of our society. This crime doesn't sit well on anybody, but certainly is an outrage when it's a priest or any vowed religious.

No priests have ever "vowed to be the moral and ethical leaders of our society". Diocesan Priests at Ordination make various Promises, none of which is to be a moral and ethical leader. Religious are the ones who make Vows of Poverty, Chastity, and Obedience. Through our Baptism, we are all called to be moral and live a life of example. You cannot convert anyone by pounding a pulpit or being superior. We convert, we evangelize through our example and ethical behavior. Putting Priests on pedestals as people who are better than us is partly what got us in the mess we are in. Thinking that Priests are beyond reproach is ridiculous. We are all sinners regardless of our position in the Church.

Well, well! The first line in SNAP"s statement that institutions cannot police themselves is right-on-point and the opposite of what the Pope, who needs to resign because of his abysmal record protecting abusers, places in his new guidelines. Why are the 15 Texas dioceses waiting until early next year to release the names of credibly accused priests? Don't they know? Or, are they waiting until they've counted the Christmas collection to be sure the numbers are up? The Texas AG needs to do what the California AG is doing: investigate the entire rat's nest. Maybe the U.S. AG should revisit the idea of RICO charges against the ordinaries of every dioces in the U.S. and their predecessors.

Will Nier
1 year 9 months ago

What is the Catholic Church trying to hide. Secular authorities must be the ones's to handle all accusations of sex abuse by it's priests and bishops or cover ups. There credibility continues to erode. Life is not a usual within the Catholic Church.

I know many Bishops and Priests who are men of faith. They want this cancer of abuse cut out and the relevant authorities, i.e., the Police to deal with abuse.