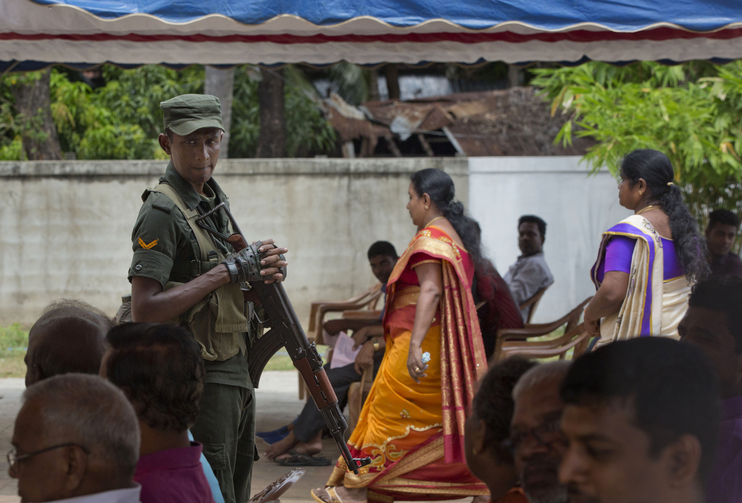 A soldier stands guard amid Catholics attending Mass outside St. Joseph's church in Thannamunai, Sri Lanka, Tuesday, April 30, 2019. This small village in eastern Sri Lanka has held likely the first Mass since Catholic leaders closed all their churches for fear of more attacks after the Easter suicide bombings that killed over 250 people. (AP Photo/Gemunu Amarasinghe)

THANNAMUNAI, Sri Lanka (AP) — The checkpoints started just outside of an east Sri Lanka village, the strictest seen in the days after Islamic State-aligned militants launched suicide attacks that killed over 250 people.

The trucks stopped first, soldiers digging through crates and produce. Buses disgorged their passengers. Cars lined up single file so soldiers could open their hoods to inspect engine blocks and pull everything out of trunks.

The reason became clear soon after, as the sound of hymns filled the air of Thannamunai.

The small village in eastern Sri Lanka held likely the first Mass since Catholic leaders closed all their churches for fear of further attacks. Under incredibly tight security, worshippers watched a priest be ordained as they hoped for a future when Mass wouldn't require hundreds of troops armed with assault rifles to defend it.

"People wanted to celebrate Mass, they wanted to participate in this, but they — even myself — were afraid," Father Norton Johnson told Associated Press journalists who witnessed the Mass. "However, security personnel gave us good protection."

The Mass in Thannamunai, about 225 kilometers (140 miles) northeast of the capital, Colombo, had been planned at least two weeks earlier to mark the ordination with the participation of some 200 priests. They had expected thousands to attend the ceremony at St. Joseph's Catholic Church.

Then came Easter. The morning of April 21, suicide bombers attacked three churches and three hotels across Sri Lanka. Soon after, the U.S. Embassy in Colombo warned against attending services at any place of worship in the multiethnic nation of 21 million Buddhists, Christians, Hindus and Muslims.

Catholic leaders then closed all their churches. Cardinal Malcolm Ranjith, the archbishop of Colombo, celebrated Mass this past Sunday at his residence, with the country's leaders attending. The faithful prayed on their knees at home, watching his homily in a televised broadcast.

Ranjith said Tuesday that parishioners would form "vigilance committees" to check IDs at church doors and keep anyone with a bag from entering when some Masses resume this weekend.

But the invitation for the ordinations already had been sent out. After confirming with the military, Johnson and other Catholic leaders agreed to quietly hold the Mass for the community. Johnson said he believed it to be the first Mass held in the country, outside of small gatherings for prayers quietly held at believers' homes.

What had been expected to be a crowd of 3,000 turned into several hundred. The 200 priests expected instead became 80. But still they came Tuesday morning, the priests laying their hands on the new priest's forehead as he knelt before them.

Security personnel remained tense, in part because Thannamunai is wedged between Muslim neighborhoods and authorities believe militants remain at large. The alleged mastermind of the Easter bombings also preached a violent interpretation of the Quran nearby, promising heaven to those who killed nonbelievers. Islamic State leader Abu Bakr al-Baghdadi, who hasn't been seen in nearly five years, appeared in a video Monday and praised the Sri Lankan attackers, who earlier pledged their loyalty to him.

During the service Tuesday, a Muslim woman rode past sitting side-saddle on a small motorbike, her black abaya billowing in the wind. Johnson made a point to say that those behind the Easter attacks were "only a few terrorists."

"In every religion, every race, there are extremists. They do certain things. But we can't blame one community for these problems," the priest said. "The Muslim community, they are afraid, and they are sorry about this incident. And what I can say is we are with them."

Police officers arranged separate lines for men and women outside of St. Joseph's. The officers carefully patted down those entering the service. Around 300 soldiers, 60 police officers and special commandos stood guard, some behind the church looking at the blue still waters of a nearby lagoon.

"It's a very risky thing," said one army officer, smiling.

But inside, worshippers prayed with their eyes closed, some barefoot. A choir sang hymns backed by a synthesizer and drums, their Tamil verses peppered with hosannas, an exclamation to give praise to God. Orange streamers hung from the rafters. Bouquets of flowers ringed its chandeliers.

St. Joseph's earlier was near the front lines of the government's decades-long civil war against the Tamil Tigers. Mortars once struck the church, damaging it, Johnson recounted. But it was rebuilt, as he hoped peace would soon be across all of Sri Lanka.

"We are all the same," he said before walking back into the church. "All of our blood is red."

The Holy Mass heals and empowers.