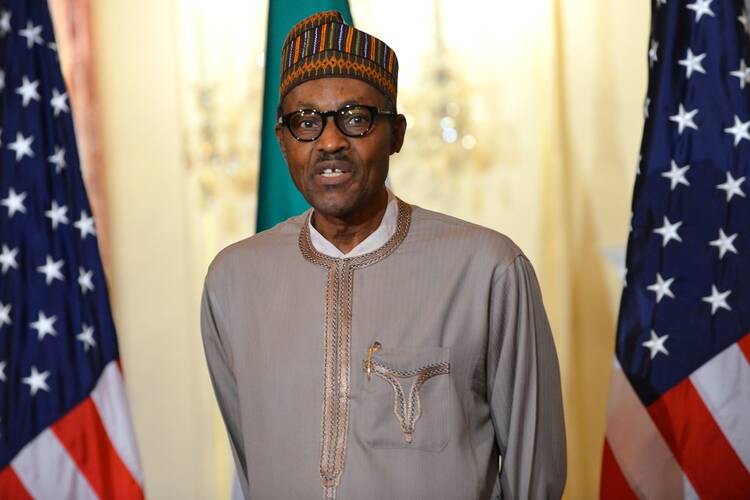 LAGOS, Nigeria (CNS) -- Several Catholic bishops appealed to the Nigerian government to expedite actions that will lead to the release of Leah Sharibu and other girls held captive by Boko Haram insurgents.

In their Easter messages, the bishops also urged the government to end the incessant and wanton killings of fellow citizens in the country; no one has the right to kill another person, they added.

Bishop Hilary Okeke of Nnewi said there was a ray of hope regarding the fate of the abducted girls and that Nigeria's bishops "are not relenting" in their efforts to recover them from their captivity.

Leah, 15, was taken hostage with more than 100 girls in the town of Dapchi early last year, in the largest mass abduction since Boko Haram took 220 girls from the town of Chibok in 2014. When the others were freed a month later, she was the only one not released -- reportedly because she refused to renounce her Christian faith. About 120 Chibok girls are still in captivity.

The bishops' conference has formally involved Pope Francis, and the Vatican might have reached out to President Muhammadu Buhari on the issue, Bishop Okeke said.

Bishop Okeke said he thought the government was doing the best it could to stem the rising conflict in Nigeria and killings by ethnic Fulani herders. He said the killings started before Buhari's election in 2015 and might continue beyond his presidency because the herders seem to appreciate their cows more than humans.

In a separate message, Bishop Stephen Mamza of Yola condemned the unabated killings and violent crimes across the country. The president and security forces should be able to stop the attacks, he said.

"We are really in a dilemma," with Nigerians "feeling that we don't have protection," Bishop Mamza said.

"We have mass burials from time to time, and there is no sign that the government cares about what is happening," he added.

Communal violence is widely attributed to a decades-old cycle of conflict between predominantly Christian farmers and Muslim semi-nomadic herders, partly due to competition for arable land.

Bishop Emmanuel Badejo of Oyo said the Nigerian government "should do everything possible to defend and protect Nigerian lives and seriously deal with all forms of extrajudicial killings."

There is "no legitimate leadership without sacrifice and service," he said in his message. "I pray fervently for a turnaround for peace and harmony in all Nigeria."

Bishop Matthew Hassan Kukah of Sokoto urged Buhari to initiate programs that would improve the lives of Nigerians, noting that the country "is sinking deeper into despair, chaos and despondency."

Archbishop Alfred Adewale Martins of Lagos called on Nigerians to show more empathy for their fellow citizens and be ready to make sacrifices for the common good.

"We must show more tolerance" and "accommodate those with points of view that are different from ours," he said in his message.

Archbishop Matthew Ndagoso of Kaduna called on the government "at all levels to do all within their powers to help save all the communities besieged by armed bandits and kidnappers, cattle rustlers, armed robbers and the so-called hoodlums."

The government "should make the environment safe for economic activities, especially farming," he said.

Bishop Matthew Audu of Lafia urged Christians to protect the lives of their fellow humans, noting in his message that "we must be ready to make sacrifices so that other people will live" and "support people who are in need."