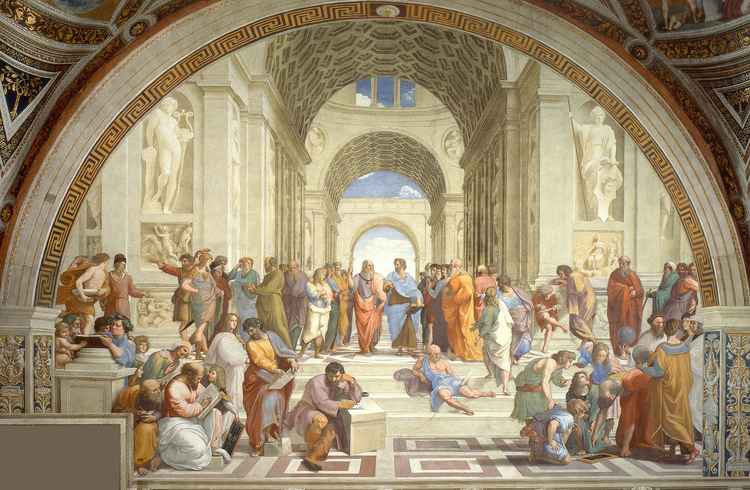 Though he was beloved as a teacher by many students over more than half a century, Jim Schall’s style of teaching and thinking was never fashionable. He was often described as contrarian and sometimes (though not always accurately) as a political conservative, and he could be pugnacious—but his purposes were larger than any of these descriptions. His attention to the tradition, both of the church and ancient thinkers, was invested with a rare humility. And that set him at odds with more recent, narrow and cramped schools of thought. He continually urged that we should not be too proud to learn from the past.

Ordained a priest in 1963, and earning his doctorate in 1960, Father Schall lived out his priestly and academic ministry during one of the most tumultuous periods of modern Catholicism. At a time when the church, following Vatican II, was becoming more engaged with the world, he turned his attention to things beyond this world. Father Schall’s preoccupations were the “last things”: death, judgment, heaven and hell. When many of his Jesuit peers were becoming more engaged with contemporary questions, he focused his doctoral studies on the political philosophy of ancient and mediaeval thinkers.

He continually urged that we should not be too proud to learn from the past.

He did not pursue those themes as a flight from the world, however, but with an abiding interest in the “essential and ultimate implications” of these conditions of human life for politics. Like his great teacher Plato, Father Schall always tried to put politics within the larger context of human life, writing about art, friendship, literature and play. He loved the cartoon strip “Peanuts”, and thought Charles M. Schulz’s cartoons raised better questions than the works of many modern political thinkers.

Indeed, when I told him that I planned to study more political theory in my philosophy studies as a Jesuit, he wrote, “If you only know politics, you’ll be an idiot.” Needless to say, I did not study more politics.

Father Schall’s innate feel for how political life leads to questions about “more astonishing and intriguing things” made him a gifted mentor to many students, both at Georgetown and beyond. While I never took a class from him, his writings on revelation and politics illuminated my own readings of Plato, Augustine, Hobbes and Nietzsche as an undergraduate, allowing me to see the study of politics as a privileged way to think about the nature of the human person as a human being, citizen and Christian. And when I formed my dissertation committee in 2010, I knew I had to ask him to serve on it.

A chief purpose of Christianity, Father Schall often wrote, was to remind politics of the limits of the reason that informed it. The passion of the intellect strives to know all things, Father Schall insisted with Plato and Augustine, to account “for the whole.” But “reason brings up questions... that it cannot fully answer on its own terms,” which “means that it is not a complete account of all things, of the whole.”

Father Schall developed his contrarian habits in part from his mentor, Heinrich Rommen, a brilliant political philosopher who fled Nazi Germany in the ‘30s and has been sadly forgotten in Catholic circles.

Professor Rommen argued that the Catholic tradition rests upon polar tensions. While he had no objection to thinkers emphasizing one pole over another, problems arise when a thinker or school of thinkers are willing to abandon one pole entirely. The history of Catholic thought, then, is the story of a swinging pendulum: often over-correcting one extreme with another, rarely in the middle.

For Father Schall, while there was much to celebrate in the American regime, Augustine had shown that any earthly city is too passing to be identified wholly with the Kingdom of God.

One can see Professor Rommen’s influence throughout Father Schall’s work. His appraisal of Jacques Maritain is instructive. In his advocacy of Christian democracy, he thought that Maritain was right to emphasize both the political nature of humans and the positive role of reason in politics. But Maritain advocated such teachings to the exclusion of other truths, Father Schall argued, namely the transience of any earthly city and the corrupting tendencies of power. Maritain forgot the deep tradition of Christian ambivalence to particular regimes.

Father Schall was thus also no great fan of the “Murray project” espoused by American conservatives like Father Richard Neuhaus, Michael Novak or George Weigel, who sought to prove the complementarity between Catholic faith and American liberal democracy. For Father Schall, while there was much to celebrate in the American regime, Augustine had shown that any earthly city is too passing to be identified wholly with the Kingdom of God.

Indeed, while his criticism of many modern tendencies made him palatable to some Catholics aligned with political conservatism, Father Schall’s work runs deeper than any conservative/liberal divide, and it is unfortunate that his work has not been extensively engaged by politically liberal Catholics. A critical task of Schall scholars in the next generation will be to shed some of their own ideological agenda in an effort to share his wisdom with others.

Professor Rommen’s influence is most prominent in Father Schall’s guiding theme: Tertullian’s question about Athens and Jerusalem, or the relationship between reason and revelation. Father Schall thought that Christianity had lost much not only in turning away from pre-modern Christian traditions, but also in underestimating the necessity of ancient traditions of reason, most especially in the work of Plato and Aristotle. By undervaluing those traditions, modern thinkers have become prey to their own unreflective ideologies.

In a time when “polarization” is offered as an explanation for almost everything that ails us, Father Schall’s life reminds us to take a step back from the superficial intellectual preoccupations that are no little cause of that polarization.

When I shared Father Schall’s bibliography with a friend, he reminded me of a prayer of Blessed Cardinal Newman. The prayer seems most appropriate in light of Father Schall’s long and fruitful ministry as a priest and professor:

May God support us all the day long, til the shades lengthen and the evening comes, and the busy world is hushed, and the fever of life is over, and our work is done. Then in his mercy may he give us a safe lodging, and a holy rest and peace at last.

Bill McCormick, S.J., is a visiting assistant professor at Saint Louis University in the departments of political science and philosophy. He is an editor and writer for The Jesuit Post.