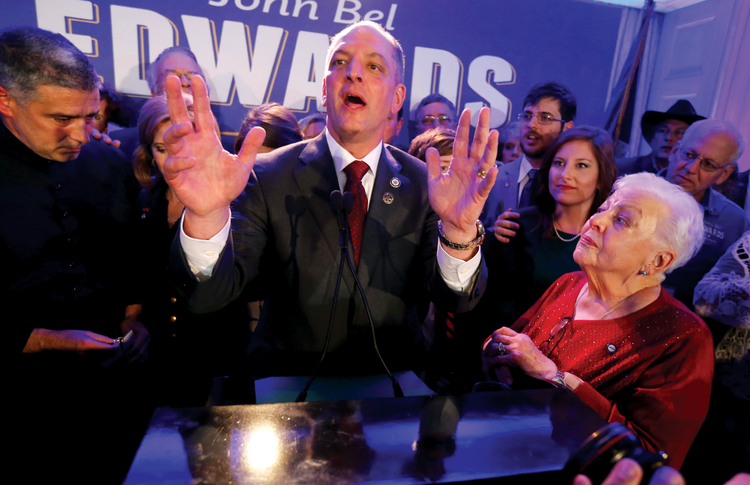 Mr. Edwards addresses supporters at his election night victory party in New Orleans on Nov. 21, 2015. Next to him are his daughter, Samantha, and his mother, Dora Jean Edwards. (AP Photo/Gerald Herbert)

Near as I can tell, the first substantive mention of a U.S. politician in the pages of this magazine was in the issue of July 24, 1909, when the editors addressed the legislative predicament of President Taft’s tariff proposals. According to the editors, Congress was attempting “to show the president that it is impossible for him to get what he wants and to cause him to be satisfied with what he can get.” The report could have been filed yesterday. In 2018 Americans are still debating the wisdom of tariffs and members of Congress are still at odds with the White House. Some things don’t change.

Yet a great deal more has changed since our first editor in chief John Wynne, S.J., set up shop at 32 Washington Square. Father Wynne and his colleagues would hardly recognize the world we live in today as the world they also inhabited. In addition to observing a century of gargantuan advances in technology and engineering, they would be pleasantly surprised to learn that Catholics now occupy prominent positions in every field of public life. That would have been unimaginable in 1909, when huge swaths of American society were closed to Catholics. (In that same issue, for example, the editors decried the anti-Catholic bias of the secular press.)

The public square is a less hospitable place for overtly religious points of view than it was a century ago. That is not entirely the fault of secularists.

At the same time, generally speaking, the public square is a less hospitable place for overtly religious points of view than it was a century ago. That is not entirely the fault of secularists. In the case of the Catholic Church, the twin crises of sexual abuse and ecclesiastical mismanagement have greatly enfeebled the church’s public credibility. As a result of this cultural shift, U.S. Catholics are asking just what role their faith can and should play in their public lives—rightly intuiting that faith should have a place in public life while also acknowledging that we live in a pluralistic, democratic society.

To help you consider this puzzle, we are launching in this issue a new feature, the America Profile. Each year, America’s editor in chief (yours truly in the present instance) will take an in-depth look at a public figure whose Catholic faith plays a meaningful role in his or her life and work. For this first America Profile, I have selected Louisiana’s governor, John Bel Edwards, who is a lifelong Catholic and a Democrat in a largely Protestant and Republican state. If I do say so myself, it makes for an interesting story.

The editors deliberated about what to call this new feature. In traditional journalism, a profile is understood to be an examination of someone’s life and record, one in which the author is expected to dole out praise and criticism as if he or she were some journalistic Judge Judy. That approach would make more sense if I were a disinterested observer and the editor of a newsmagazine rather than a priest and the editor in chief of a magazine with a definitive religious and philosophical point of view. In other words, when it comes to the content and quality of the public discourse, I have a dog in the fight.

John Bel Edwards appears to be basically what he says he is: a faithful Catholic who is trying to bring his religious principles to bear in a job that requires equal parts principle and pragmatism.

I also think that it is more important in our toxic political climate to stress what is positive, to look at people who might serve as role models for Catholics in public life. That being said, Governor Edwards is not perfect, and while I admire his faith and his many accomplishments, I do not agree with everything he has said and done. Then again, you already know that we don’t require individuals to agree with us in order for us to bring you their views.

Truth is, though, John Bel Edwards appears to be basically what he says he is: a faithful Catholic who is trying to bring his religious principles to bear in a job that requires equal parts principle and pragmatism. That is not easy. I hope you enjoy reading it as much as I enjoyed reporting it. Louisiana is a special place, and I hope my affection for it comes through in the piece.

I am also mindful of the fact that this issue of America is our Christmas issue. Like you, I like to take stock of things at this time of year. As 2018 draws to a close, I am grateful to you, our faithful readers. Your loyalty and generous support are why we get out of bed in the morning. It was a tough year of dizzying highs and crippling lows—you stuck with us through it all. Thank you.

I am also grateful to our board of directors and benefactors, whose generosity makes it all possible, and to our editors and staff, who are the finest men and women I know. Father Wynne, I am sure, would be proud.

From all of us at America Media: Merry Christmas!