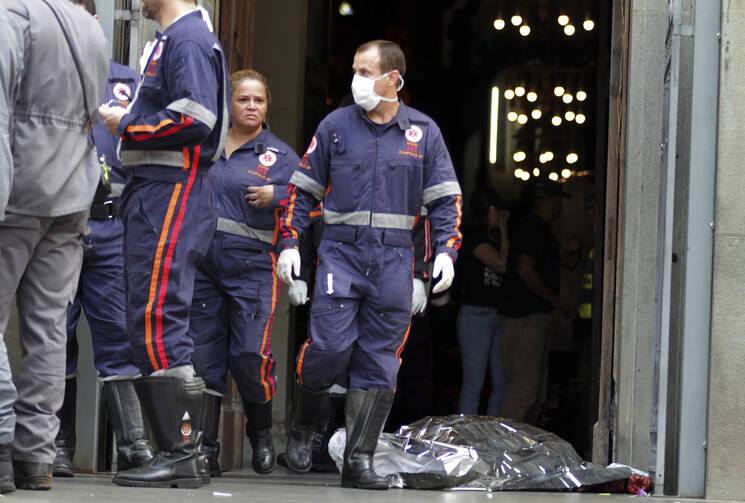 A firefighter walks next to a victim killed at the Metropolitan Cathedral in Campinas, Brazil, Tuesday, Dec.11, 2018. Authorities say an armed man entered the cathedral in southern Brazil on Tuesday afternoon and opened fire, killing at least four people before killing himself. (Denny Cesare/Futura Press via AP)

RIO DE JANEIRO (AP) — A man opened fire in a cathedral in southern Brazil after Mass on Tuesday, killing four and leaving four others injured before taking a bullet in the ribs in a firefight with police and then shooting himself in the head, authorities said.

The mass shooting, a rarity in Latin America’s largest nation, happened right after the midday service had ended at the Metropolitan Cathedral in Campinas, a city about 60 miles (100 kilometers) north of Sao Paulo.

“It’s so sad,” said Wilson Cassante, a press officer with the archdiocese. “It’s hard to imagine the pain this has caused.”

Hours after paramedics were seen taking bodies and injured out of the church, authorities identified the shooter as 49-year-old Euler Fernando Grandolpho of Valinhos, a nearby city in the densely populated state of Sao Paulo.

Grandolpho, a systems analyst, was not a member of the church, authorities said. According to public records, Grandolpho had held various jobs with government entities, including a stint as an assistant to the prosecutor in the public ministry in Sao Paulo.

Police identified the gunman as Euler Fernando Grandolpho, 49, of Valinhos, a nearby city in the densely populated state of Sao Paulo. Police said the gunman fired more than 20 shots before being cornered by officers near the altar and killing himself.

“I saw people getting shot. I can’t get it out of my head,” she said in tears. “It was horrible.”

Danielle Coutinho told EPTV that she was sitting in the church chatting after Mass when the shooting began. A man sitting close to her was shot as she and others ran.

“I saw people getting shot. I can’t get it out of my head,” she said in tears. “It was horrible.”

Brazil has long struggled with gun violence, and is routinely the world leader in total homicides. Last year, nearly 64,000 people were killed. President-elect Jair Bolsonaro, a former army captain, campaigned on promises to crack down on violence, in part by loosening gun laws so more civilians could arm themselves.

Still, mass shootings like those in the United States are unusual.

Hamilton Caviola Filho, a police investigator, told news portal G1 that authorities had reviewed surveillance footage from inside the cathedral.

The shooter “came into the church, sat on a pew, with time to think, and then got up and starting shooting,” said Caviola Filho.

The shooter “came into the church, sat on a pew, with time to think, and then got up and starting shooting,” said Caviola Filho.

The investigator also said that before shooting himself in the head, the suspect took a bullet in the ribs from responding police. In total, the suspect fired at least 20 shots, said Caviola Filho.

Father Amaury Thomazi, who celebrated Mass before the shooting, posted a video recounting the chaos that followed the burst of gunfire.

“Nobody could do anything or help in any way” to stop the rampage, Thomazi said, calling on people to pray for the dead, the injured and the shooter.

"We suffer with the people who at this moment mourn the death of their friends, brothers and relatives. We ask everyone to pray for these families to find comfort and peace in God," the archdiocese said.

The cathedral was to reopen at noon Dec. 12 for a special Mass for those who died. The four bodies are scheduled to be brought to the cathedral for viewing during the day before burial.

Of the four injured in the shooting, an 84-year-old man remains hospitalized in critical condition after being shot twice in the chest and abdomen. Another victim remains in observation after undergoing surgery to remove bullets from her torso and two other victims were treated at a nearby hospital and released.

Police said the motive for the shooting was unclear and continued to investigate the gunman's background.