Vatican expert: Tone down the crisis rhetoric on human migration 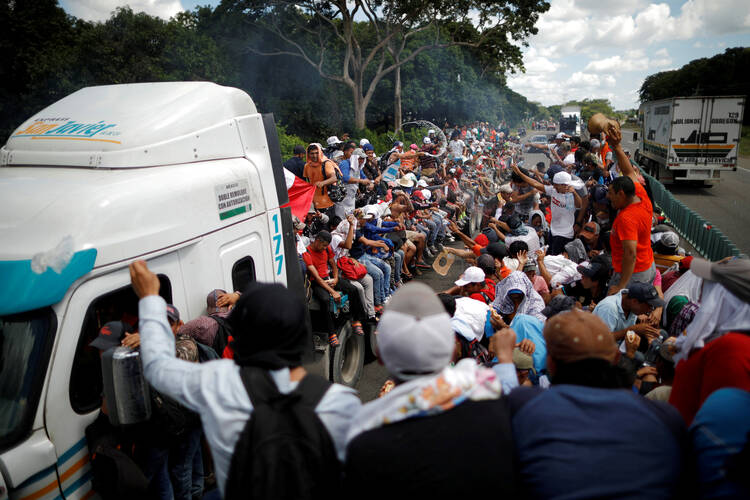 A large caravan of migrants from Central America, trying to reach the U.S., climb on a truck Oct. 21 in Tapachula, Mexico. (CNS photo/Ueslei Marclino, Reuters)

With a group of several thousand migrants from Central America trekking toward the United States, President Donald Trump has sought in recent days to instill a sense of urgency in trying to stop the so-called caravan—including threats to send troops to the southern border.

The president’s warnings are just the latest in a years-long campaign by him and other political leaders, some who oppose immigration and others who support it, to cast migration as a global crisis.

But one of the Vatican’s top migration experts wants people to knock it off.

“I think one of the things we need to do is tone down the hysteria,” said Michael Czerny, S.J., undersecretary of the Migrants and Refugees Section of the Vatican’s Office for Integral Human Development.

“It’s a series of mismanagements and poor policies and self-interested manipulations. The numbers that we’re talking about, even on the total scale, are not at all that great.”

Those words coming from a Catholic priest serving a pope known as a fierce defender of migrants may surprise some. But the Canadian Jesuit said people must not succumb to fear mongering and realize that the challenge of migration today is solvable—but only if there is political will.

“It’s not a crisis,” Father Czerny said. “It’s a series of mismanagements and poor policies and self-interested manipulations. The numbers that we’re talking about, even on the total scale, are not at all that great.”

He pointed out that when it comes to hosting refugees, it is often countries that can least afford it who end up welcoming displaced peoples. Numbers bear this out. According to the United Nations, Turkey hosts 2.8 million refugees, the largest number in the world. Other countries that host high numbers of refugees include Pakistan, Lebanon, Iran, Ethiopia, Jordan, Kenya and Chad. Germany is the only western European country that makes the top 10.

Father Czerny, along with the Rev. Robert Stark, S.S.S., a priest in the Diocese of Honolulu and the North America coordinator in the Migrants and Refugee office, were appointed by Pope Francis as delegates to the synod of bishops currently meeting in Rome. The pair spoke to America during a recent interview in Rome.

According to a 2017 report from the United Nations, there are more 258 million people who reside somewhere other than their home country, a slightly higher percentage of the world’s population than in 2000. The highest percentage of international migrants reside in the United States, followed by Saudi Arabia, Germany, Russia and the United Kingdom.

The overall numbers of people who are forcibly displaced because of conflict or natural disaster indeed seem formidable. According to the latest UN figures, more than 68 million people around the world have been displaced. About 40 million have been driven from their homes but remain within their national borders, but more than 25 million are refugees, people forced across borders to escape conflict or crisis in their home countries.

All the same, Father Czerny said, “we should resist the flashing lights and all that.”

“Let’s get on with it case by case, person by person, family by family. And in fact, you’ll find out it sorts itself out very well.”

“If there was some effective coordination or collaboration between the two kinds of ministry, we would see some interesting results because we would see people who have been through very extreme situations of vulnerability, of discernment, of choice, of risk and of courage turning around and helping other young people to face the questions of life,” he said.

“Let’s get on with it case by case, person by person, family by family. And in fact, you’ll find out it sorts itself out very well.”

The issue of migration has indeed been prevalent during the synod, which brought together bishops with priests, sisters and young lay people from around the world.

Cardinal Berhaneyesus Souraphiel of Ethiopia said during a press briefing that most migration in Africa involves people moving from one country to another within the continent. He blamed violence and environmental degradation, fueled by greed and corporate interests.

“It is a Christian value, a Christian obligation, to receive the stranger,” he said, but added that people should not be forced to move in the first place.

That sentiment was shared by Father Stark.

Some of the young adults consulting with bishops were migrants themselves and they urged bishops not to be afraid in speaking up for those who find themselves in new places.

Yadira Vieyra, an immigrant from Mexico living in Chicago, is an auditor at the synod. She told America that migrants “are experiencing a very unwelcoming environment” in the United States.

The United States next year under President Trump is set to admit the lowest number of refugees—30,000—since 1980.

Polls show people in the United States and Europe continue to be split when it comes to immigration, with opponents here and abroad saying the ability of developed nations to integrate migrants is being tested.

Father Czerny rejects that argument. He said wealthy nations have a duty both to welcome those on the move today while simultaneously providing aid to improve conditions from where people leave.

“You cannot sacrifice the rights and dignity of people who are arriving on foot or in dinghies to a 10-year development plan,” he said.

But, he added, accepting refugees does not “exempt or exonerate” rich countries from the “real responsibility” they have “to promote authentic development” with the aim of giving people “the right to remain.”

When it comes to young adults specifically, Father Stark said that both migrants and those helping them settle in new lands benefit when they interact. People who welcome migrants discover things about themselves they did not know existed and become forces for change.

“It has a ripple effect on all of society,” he said.

As for the argument that the challenge of resettling migrants is too great, Father Czerny scoffs. He noted that the United States and China appear poised to launch a new space race with the goal of sending a human being to Mars.

This is absurd. How on Earth do you expect Cardinals Burke and Chaput and Vigano to make money?

Evidently, Father Czerny's expertise does not extend to the current homeless crisis in California. All of the migrants intend to enter the border at Tijuana. This is just a short way from Anaheim where crude tents serve as "housing" for the homeless and line the city streets. His simplistic view will only exacerbate a terribly sad problem currently occurring. His compassion does not extend to them. I will take the Vatican's view more seriously when they throw open their own walled off existence and allow the tent cities to thrive there. Compassion begin at home Father Czerny.

I do not acknowledge the authenticity of the drivel being served up under the rhetoric of "Catholic social teaching" or "social justice" and see only Marxist origins of its convoluted virtue signalling and collectivism.

The Vatican is a mismanaged collective pseudo-state whose house is so far from being in order that taking advice from it is foolish folly. Come back to us about our collective duties when your own houses are in order Presbyter Michael Czerny, both the Vatican and the Jesuits.

Pope Francis loves the Third World so much that I hope Salvini invites the Pope to move to Africa so the Pope can be near the people who mean the most to him = any Third World beggar who is not White. The Italian government can hold Vatican City in trust until a Tridentine Mass pope arises out of the muck of the "Sacred" College of Cardinals. I bet the Sacred College is so feckless that if the Italian government required that the next pope cancel Vatican II and return to the Tridentine Mass, that all of the uber liberal members of the College of Cardinals would "suddenly" find tradition just so they could put that tripe tiara on their heads and ruby slippers on their feet.

Just an observation -- the "tractor" pulling the "trailer" full of immigrants appears to be a brand new Volvo (not Freightliner, etc.) Does anyone else find this curious?

Condescending remarks by prelates who do not have to live with the consequences of illegal immigration. Thank goodness President Trump does not listen to them.

Are any USA Catholic bishops inviting the immigrants to live in the bishop's mansions? Probably not?

"to migrate is a right....".....and when you exercise that right what are my rights?-according to this lopsided article, I dont have any--I have to accept you whether I like it or not! puhlease!.....stop beating me over the head with your open border nonsense. This caravan gets food and trasportation from somebody--who? who is funding this mass migration?
maybe the same people who funded the mass migration of 1M people from the Middle East and Africa in 2015 to Germany in the hope of destabilizing German society--which seems to be working!
Starsky & Hutch are "shameful and embarrassing and absurd.”

The Church needs to listen to the people of the country being affected by this madness. Informed Americans are experiencing this immigration nightmare in many different ways. We need to change our immigration policies to fit the culture we are experiencing today. We needs to legislate policies that fix loop holes that exist and develop a method of legalizing those who want to become citizens to become contributors not takers. Looking at what has happened in Europe, we can't be naïve to the fact many are out to destroy our country. We must protect our nation and allow the President to do his job to protect his people.
Some have said these people coming our way look well fed; I wonder also who is funding this madness. Let's get behind out President and all pray for God to guide.

How many of these people will be housed at the Vatican???