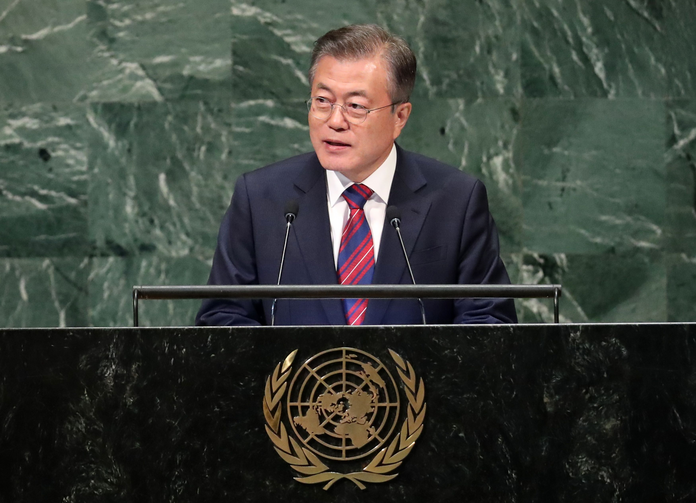 South Korea’s President Moon Jae-in will meet Pope Francis on Oct. 18. and will deliver an invitation from the leader of North Korea Kim Jong-un to visit Pyongyang. The news was broken by the spokesman for the South Korean leader today.

Asked today if Pope Francis would accept the invitation, Greg Burke, the director of the Holy See’s press office, said, “Let’s wait for the invitation to arrive first.”

Mr. Burke added that Cardinal Pietro Parolin, the Secretary of State will celebrate Mass in St. Peter’s Basilica at six o’clock the previous evening, Oct. 17, for peace in the Korean peninsula, at which President Moon will participate.

President Moon, a Catholic, has played a very active role in promoting peace between North and South Korea and in helping avert a conflict with the United States. According to the Korean Times, Mr. Kim Eui-kyeom, the spokesman for the South Korean leader revealed that “President Moon suggested that Chairman Kim meet the pope, pointing out that he is very much interested in peace on the Korean Peninsula” and “Kim promised Moon he would give a fervent welcome to the pope if he visited Pyongyang.”

President Moon, a Catholic, has played a very active role in promoting peace between North and South Korea and in helping avert a conflict with the United States.

President Moon arrives in Europe on Oct. 13 as part of a nine-day visit to various countries. He will visit the Vatican on Oct. 17-18 and, according to Yonhap newsagency, “he will seek the pope’s blessing and support for peace and stability on the Korean Peninsula and discuss ways for future cooperation with the Vatican.”

Pope Francis, who advocates a culture of encounter over confrontation, is well aware of the fragile and at times dramatic political reality in the Korean peninsula. The country has been divided along the 38th parallel since the end of World War II and its people have suffered tension, conflict and division ever since the Korean War (1950-53), which ended with an armistice truce, not peace.

Pope Francis visited South Korea in August 2014, where there is a vibrant Catholic community with some 5.5 million members or just over 10 percent of the South Korean population. At the end of that visit, he celebrated a nationally televised Mass in the cathedral of Myeong-dong in Seoul, on Aug. 18, “for the peace and reconciliation” of the entire Korean people, many of whose families have been divided across the 38th parallel ever since 1945.

In his homily, in the crowded cathedral, he invited everyone to “pray for the emergence of new opportunities for dialogue, encounter, and the resolution of differences, for continued generosity in providing humanitarian assistance to those in need, and for an ever-greater recognition that all Koreans are brothers and sisters, members of one family, one people. They speak the same language.”

Since then, he watched with growing concern the escalating tensions and even threats of nuclear attacks between the United States and North Korea, a country of 25 million people where religious freedom is not recognized and Catholics are very few. North Korea has very close ties with China, with which the Holy See recently signed a first ever agreement.

“Korea is living at a Kairos, a moment of grace, and important time."

His decision last year to condemn not just “the use” but also “the possession” of nuclear arms as “immoral” also resulted from this dramatic situation where the terrifying prospect of their use, even by accident, became every day more threatening not only to the peoples of Korea and the United States, but also to the wider world. He issued his condemnation in a speech at a conference in the Vatican on Nov. 10, 2017.

The Holy See, which has kept a dialogue with North Korea throughout these years, and sent aid and a delegation to Pyongyang more than once, invited North Korea to send a delegate to that conference, but it did not do so.

With the election of the new president of South Korea, Mr. Moon, the situation began to change for the better as he worked hard to create a climate in which the possibility of denuclearization in North Korea and peace in the peninsula became possible.

On June 10 of this year, Pope Francis asked thousands of pilgrims in St. Peter’s Square and believers worldwide to join him in praying for the success of the first ever face-to-face meeting between a sitting president of the United States and the leader of North Korea in Singapore two days later. He prayed that the historic encounter between President Donald Trump and President Kim Tong-un “may contribute to the development of a positive path that can assure a future of peace on the Korean peninsula and throughout the entire world.” On that occasion, he also extended to “the beloved Korean people,” meaning those living in the north and south, “a particular thought in friendship and prayer.”

On learning the news that President Moon would meet the pope next week and bring an invitation of the North Korean leader to him to visit his country, Bishop Lazzarus You Heung-sik of the South Korean diocese of Daejeon, who is also head of the bishop’s conference “Commission for Society,” told Vatican Insider: “Korea is living at a Kairos, a moment of grace, and important time. Two years ago we saw a change of government, and President Moon has done everything possible to avoid war in Korea. He strongly believed in change, in spite of the skepticism of public opinion. Now we see the peace process move ahead, and we hope that it can be soon realized.”

As for the possibility of the pope visiting North Korea, it should be noted that Francis has already visited Asia three times and intends to visit Japan in 2019, so it would not be difficult for him to go to Pyongyang then.

It is great to have the ability to https://www.assignmenthelper.com.au/do-my-assignment/ read a good quality post with useful data on topics that a lot are interested in. The point that the data are written are all first hand on actual experiences even aid more. Keep doing what you do as we like reading your work.