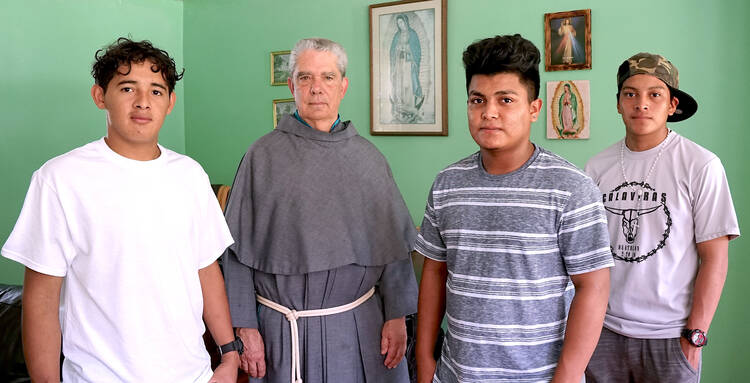 On any given afternoon, you might find 18- and 19-year-olds playing basketball in the Posada Guadalupe parking lot. But it is more likely you will find them playing soccer, either in the same parking lot or in a nearby park.

“They prefer soccer by far,” said Phillip Ley, O.F.M. Conv., director of Posada Guadalupe, a house in San Antonio for asylum-seeking young men who have aged out of detention shelters. These young men, who entered the United States as unaccompanied minors, are registered with Immigration and Customs Enforcement.

While some have only been in detention for months, others have been there for years. “Some of [the asylum seekers] are 3 years old,” Father Ley said. “They aren’t going to harm anyone.”

Posada Guadalupe can host as many as 20 young men at a time. They work on their G.E.D.s and learn English while they wait for their asylum applications to be processed. That can take as long as three years. Usually, the young men obtain work permits well before they hear back about their asylum cases.

“We usually get them on their 18th birthday. I write a letter to ICE that we will accept so-and-so. So far, the letters I’ve written have worked,” said Father Ley, who has been running the center for the last 12 years. Posada Guadalupe also sets up the young immigrants up with pro bono lawyers at Raices, a refugee aid project in Texas.

According to Victoria Neilson, an attorney with the Catholic Immigration Network Inc., undocumented young people are designated as unaccompanied children when they are in the United States without a parent or grandparent. Their petitions are among more than 764,000 immigration cases pending in court, according to the nonpartisan Transactional Records Access Clearinghouse.

“The processing time can vary considerably based on where the case is being heard,” Ms. Neilson said in a phone interview with America. Which judge is scheduled to hear the case also affects the processing time, she said, adding that approval rates also vary significantly from one judge or region to the next.

“Generally the asylum backlogs can be very stressful [on individuals], including the process of submitting the application,” Ms. Neilson said. Those seeking asylum have to “to retell their story several times and that’s coupled with the wait time.”

Father Ley’s time serving in San Antonio has been a change of pace. He spent many years in missions in Mexico, El Salvador and Honduras. Twenty years ago, a good friend of his was gunned down. Two weeks later, Father Ley was kidnapped.

“Two guys put a gun to my head,” he said. They had been following him from the bank. In El Salvador, you have to use cash because businesses do not take checks or credit cards. “I went to the bank to get the money for our weekly supply of food. They were watching me.”

The situation has only gotten worse since then, he said. The young men who arrive at Posada Guadalupe have told Father Ley they come for safety. It may take years for their cases to be resolved, but even in detention, they receive three meals, snacks and a safe place to live.

The young men who arrive at Posada Guadalupe have told Father Ley they come for safety. It may take years for their cases to be resolved, but even in detention, they receive three meals, snacks and a safe place to live.

Immigration courts have been flooded for years, but even more so since the Trump administration announced its zero-tolerance border policy, Father Ley said. Attorney General Jeff Sessions announced the new policy in May, vowing to prosecute anyone who enters the United States illegally.

“Zero tolerance will not work to dissuade anyone from coming to the United States,” Father Ley said. “Anyone who says it will work as a deterrent is either lying or doesn’t know what he’s talking about…. Just because a law is a law, that doesn’t make it moral.”

What lies in the heart of an ICE officer?
Joe Hoover, S.J.

On Sept. 24, three residents of the Posada Guadalupe huddled together on a couch to watch “Avengers: Infinity War,” dubbed in Spanish. Fernando Andino, who played the movie on his laptop, had seen it before.

“Ohhhh,” the other two wowed as the Hulk made his first appearance on the screen, ready for his showdown with Thanos, the chief villain in the series.

Mr. Andino, who came from Honduras, had been at Posada Guadalupe for three months. He had been detained by ICE for nine months before his 18th birthday.

“They treated us well—they just don’t let you go out,” he said of the detention shelter. “I left [Honduras] because I was having troubles with Mara,” Mr. Andino added, referring to Mara Salvatrucha, a powerful Central American gang that was founded in Los Angeles.

“They would pass by the house when I got older,” Mr. Andino said, but was reluctant to go into details. His mother is involved with the gangs and he still has four brothers who live in Honduras.

Next to him, Carlos Pereyra, who is also from Honduras, said poverty drove him to the United States. “The only way for me to support my family was to come here,” he said. Mr. Pereyra, who had not received his work permit, has been anxious to leave Posada Guadalupe to start working as soon as possible. He grew up never knowing his father.

Marvin Bac came in from the kitchen, where he had been doing dishes. Mr. Bac, who came from Guatemala, said he also fled the gangs. “The delinquency is such that you can’t go out on the streets,” he said. “There are a lot of gangs. They come for you and if you don’t join, they threaten one of your family members so that you will join them.”

In the United States, Ms. Neilson said, most think of gang violence as something that can be avoided. But in Central America’s “Northern Triangle”—El Salvador, Guatemala and Honduras—there are neighborhoods where gangs function as quasi-governments.

“In Central America, there are places that nowhere is safe,” she said. “Some drop out of school because their house is in one gang neighborhood and their school is in another. They can’t move back and forth without risking their lives.”

Father Ley put it more bluntly. “They either join a gang, die or leave the country,” he said. “Gang pressure is serious business. If you go into certain [neighborhoods] without permission, you’re dead. If the gangs want your daughter, they either take her or she leaves the country.”

In Central America’s “Northern Triangle”—El Salvador, Guatemala and Honduras—there are neighborhoods where gangs function as quasi-governments.

One young man who stayed at Posada Guadalupe was beaten severely for refusing to join a gang, Father Ley said. The gang let him go, but promised to return for him. That is when he fled to the United States.

“Gang initiation for boys is that you have to kill someone. For girls, you have to go to bed with everyone in the gang,” Father Ley said. Those who come to the United States are not gang members, he said.

At Posada Guadalupe, some of the young men are still in survival mode. They meet with students studying to be social workers at nearby universities. While Father Ley encourages them to study, some are coming with only three or four years of formal education. The young men are really more interested in working and sending money home.

Like typical 18-year-olds, perhaps, they do not always clean up after themselves, Father Ley said. He described an incident where a bag of frozen chicken legs went to waste because the bag was not sealed properly.

“You have to keep on them,” he said. It seems to work. The young men recently teamed up to cut the lawn with a weed wacker since the lawnmower was broken.

“Well, you know, they have to get their chores done,” Father Ley quipped. “No chores, no soccer.”