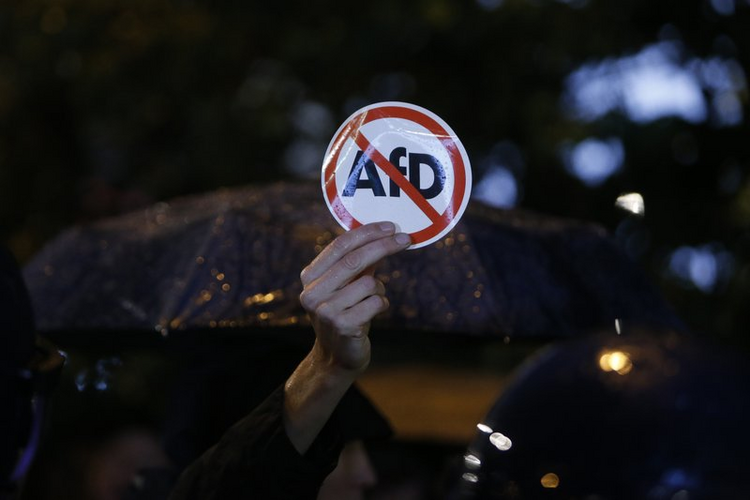 BERLIN (AP) — The far-right Alternative for Germany party has announced it will create a Jewish section within the party, drawing widespread criticism by Jewish groups across the country.

One prominent Jewish student group accused the anti-migrant party on Wednesday as being “one of the biggest threats to Jewish ... life in Germany.”

“The AfD is not getting a kosher certificate from us,” the leader of the Jewish Students Union of Germany said, referring to the nationalist party by its acronym.

Dalia Grinfeld said her group is urging all Jews in Germany to join a protest rally next month in the central German city of Offenbach, where the party plans to launch its new “Jews in the AfD” section.

Despite repeatedly downplaying the horrors of the Holocaust, the far-right party has acquired some Jewish members who are drawn to its rhetoric against Muslim immigrants.

“The AfD is the only party in Germany that makes anti-Semitism by Muslims a topic without trivializing it,” Dimitri Schulz, a Jew and founding member of the planned Jewish AfD section, told the German news agency dpa.

Still, it’s not clear how many AfD members are Jewish or how many of them plan to participate in the Afd sections founding meeting on Oct. 7.

While there has been a series of violent attacks on Jews by Muslims in Germany recently and anti-Semitism incidents have increased overall in Germany, the majority of Jews, including the country’s leading Central Council of Jews in Germany, have warned about the AfD and its anti-Semitic tendencies.

The co-leader of Alternative for Germany earlier this year dismissed Germany’s Nazi era as a “speck of bird poop in more than 1,000 years of successful German history.” Last year, another prominent AfD member said Germany needs to perform a “180-degree turn” when it comes to remembering its past and said the Berlin memorial to the millions of Jews killed in the Holocaust is a “monument of shame.”

At the same time there is widespread ambivalence among Jews in Germany when it comes to the more than 1 million migrants who came to Germany since 2015, the majority of whom are Muslims from countries like Syria or Iraq with attitudes hostile to Jews and Israel.

The head of the Jewish Council, Joseph Schuster has repeatedly warned that Jews shouldn’t wear their traditional skullcap, or kippa, in German areas with large Muslim populations.

What about the CRIMES committed in Gaza? Why is Americamag always anti-white racist?

You mean the many crimes, including murder, committed by Israel against Palestinians?

This article is about Germany... and I cannot believe that anyone who reads this is not chilled to the core. This is a serious and ominous situation...