Nebraska set for execution after about-face on death penalty 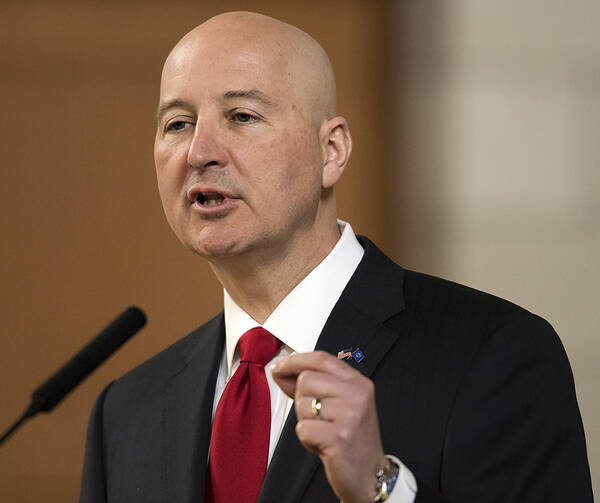 LINCOLN, Neb. (AP) — Three years after Nebraska lawmakers voted to abolish capital punishment, the state is preparing to carry out its first execution since 1997 on Tuesday in a bewildering about-face driven largely by the state’s Republican governor.

Gov. Pete Ricketts, a wealthy former businessman, helped finance a ballot drive to reinstate capital punishment after lawmakers overrode his veto in 2015. His administration then changed Nebraska’s lethal injection protocol to overcome challenges in purchasing the necessary drugs and withheld records previously considered public that would identify the state’s supplier.

“It wouldn’t even have made it to the ballot without him,” said Matt Maly, an anti-death penalty activist who has joined daily protests outside the governor’s residence. “To get something on the ballot takes a lot of money and resources. Nobody else would have cared enough.”

Ricketts argued last week that he was fulfilling the wishes of voters who opted to overturn the Legislature’'s decision in the 2016 general election. He said he views capital punishment as a matter of protecting public safety and an important tool for law enforcement, despite his Catholic faith and the recent statements by Pope Francis that the death penalty is unacceptable in all cases.

“The people of Nebraska spoke loud and clear that they wanted to retain capital punishment as part of our overall state laws to protect public safety,” he said. “Our job is to carry that out.”

The 60-year-old Moore, who has had execution dates set seven previous times, has stopped fighting the state’s efforts to execute him, but two drug companies have filed legal challenges to prevent the state from using what they say may be their drugs.

On Friday, a federal judge denied the request of German pharmaceutical company Fresenius Kabi to temporarily postpone the execution. Fresenius Kabi filed an immediate appeal to the 8th U.S. Circuit Court of Appeals, which upheld the judge’s ruling Monday. The company later said it wouldn’t pursue an additional review with the U.S. Supreme Court.

Drugmaker Sandoz Inc. also filed a motion to intervene on Saturday, but that won’t prevent the execution from moving forward.

Nebraska last carried out an execution in 1997, using the electric chair.

The Nebraska Attorney General’s Office is fighting the companies’ efforts because one of the four drugs used in the state’s execution protocol, potassium chloride, expires on Aug. 31. The state corrections director said last week that prison officials won’t be able to purchase more supplies of the drug because no companies are willing to sell to the department, including its previous supplier.

Nebraska last carried out an execution in 1997, using the electric chair. The state has never conducted a lethal injection. And on Tuesday, it plans to use a combination of four drugs that has never been tried.

Lawmakers abolished capital punishment in 2015, when they voted by the narrowest margin possible, 30-19, to override the then-first-year governor’s veto.

Some legislators expressed doubt at the time that Nebraska would carry out an execution ever again because of costly legal challenges, prompting Ricketts to ask for more time to set one in motion. His administration went so far as to pay an India-based middleman $54,000 for drugs—that the state never received—because they couldn’t be legally imported. The state money was never repaid.

After lawmakers overrode his veto, Ricketts contributed $300,000 of his own money to a petition drive organized by several close associates to place the issue on the November 2016 general election ballot. The governor’s father, TD Ameritrade founder Joe Ricketts, also donated $100,000 to the Nebraskans for the Death Penalty campaign.

Nebraskans for the Death Penalty raised a total of $1.3 million for the effort, but was outspent by a death penalty opposition group that received nearly $2.7 million. Even so, the reinstatement measure won support from 61 percent of voters.

Death penalty supporters said the Legislature’s vote was a fluke that didn’t represent the will of voters in the overwhelmingly conservative state. Some moderate, Republican lawmakers who previously voiced support for capital punishment but then voted to repeal it lost their seats in the 2016 election after Ricketts endorsed their opponents.

“The public (in Nebraska) has always agreed with the death penalty— always,” said state Sen. Mike Groene, an outspoken supporter of capital punishment. “I’m not the outlier here, and neither is the governor.”

Groene said the vote to reinstate capital punishment amounted to “a direct mandate from the public” to resume executions. He noted that Ricketts has now appointed a majority of the state’s Supreme Court justices, which could help clear the way for future executions.

Nebraska uses the death penalty sparingly and only for crimes considered to be the most heinous, said Bob Evnen, a Lincoln attorney who co-founded the Nebraskans for the Death Penalty petition group.

Evnen said many of the previous delays in carrying out executions were driven by a 2008 Nebraska Supreme Court case that declared the electric chair unconstitutional, forcing the state to switch to a lethal injection protocol with drugs that are increasingly difficult to obtain for executions.

The original protocol called for three drugs to render the inmate unconscious, induce paralysis and stop the heart. After years of struggling to acquire one of the drugs, sodium thiopental, Nebraska prison officials changed their rules last year to let the state corrections

director choose which chemicals to use.

“Policymakers are actually taking the voters seriously on this,” Evnen said.

I hope Ricketts' bishop excommunicates him.

Not that I disagree, but I don't think that is the right solution. The church doesn't excommunicate people who use birth control, which is contrary to church teaching. So why use excommunication in this event?

No chance he’s a Republican !

This articles renews my faith in Nebraskan voters. The last three Popes were late life, low testosterone pacifists which JPII certainly was not when younger....ie he corrected USA Bishops on their anti nuclear position....later he would have agreed with them.

William Bannon, I am with you & with the Nebraskan voters. All this “sympathy” for the worst of the worst among us and not one word from Pope Francis for the lives of their many victims. Oh, we should put our trust in our “institutions” when a judge could decide to “let them all out” because of “overcrowding?”
Well, none of these Popes had a child or a grandchild to be concerned about while they spent their lives behind walls, protected by their Swiss Guards!

Barbara,
Ivory tower career path is one of the problems. Youth...next college...next seminary ( more books)...next priest...Bishop...Pope. Never intimate with real victimization. JPII never met with the victims of sex abuse an area in which he failed and our writers’ careers would be over if they wrote the truth about that. Next problem...Catholic profs and theologians take an oath to submit in mind and will even to the non infallible teaching of the Pope...so be careful of them on the internet....they are paying their mortgage by thinking with the herd. Google homicide by country...wiki has the UN data. Asia, death penalty dominant, is the safest large area from criminal murder. Northern Latin America from Brazil to Mexico is non death penalty and the worst large region on earth for murder and kinda Catholic but not really. China has 11,000 murders a year....Brazil has c 55,000 with 1/7th the population of China. The Popes did no research on that or on prison conditions worldwide. They guessed the rosiest....and the truth in Catholic countries below us...is more like poison ivy.

Your argument depends on Brazil and China? More probably the murder rate is dependent on more factors than the presence of the death penalty, poverty and density of population among them. As far as testosterone is concerned, it's no doubt a factor in murder rate, as well. I think a more complex analysis is called for.

I certainly sympathize with the loved ones of any murder victims. However, killing a murderer won't bring the victim back to life. If one of my loved ones or myself was murdered, I would want clemency for the murderer. For years, I have been a pen pal with a man serving life imprisonment for a serious crime. From our correspondence, I 'm convinced that my friend, a devout Jehovah's Witness, has sincerely reformed his life. There have been numerous documented cases of convicted murderers being found not guilty because of evidence provided by modern scientific techniques. Also, with respect, I don't necessarily believe that the majority is always right in their views. For instance, at one time in our nation the majority of Americans either were indifferent to or actively supported legalized slavery. Also, the majority of the Supreme Court in the 1973 Roe v. Wade and Doe v. Bolton decisions legalized the violence of abortion. According to Prof. Mary Ann Blend in in her compelling book (which I read) titled "Rights Talk: The Impoverishment of Political Discourse," among other supporters of legal abortion Prof. Lawrence Tribe has criticized the legal reasoning behind Roe v. Wade. Finally, I think it's disturbing that our nation is among those nations which have legal capital punishment . Such well-known violators of human rights as China, North Korea, Saudi Arabia and Iran permit capital punishment.

Brazil non death penalty has about 55,000 murder victims a year; China has 11,000 murder victims a year with 7 times the population of Brazil. Execution saves lives.
Japan has the death penalty and is aesthetic minded, artisan minded, and I have one of their cars and it throws shade on every Western car I ever had. Back to execution and bad countries.
French high cuisine originated during the 18th century when France had execution. The best oil paintings like those of Rembrandt came from the period of executions. Michelangelo sculpted and painted in a death penalty culture. The Vatican executed 500 criminals between 1796 and 1850.