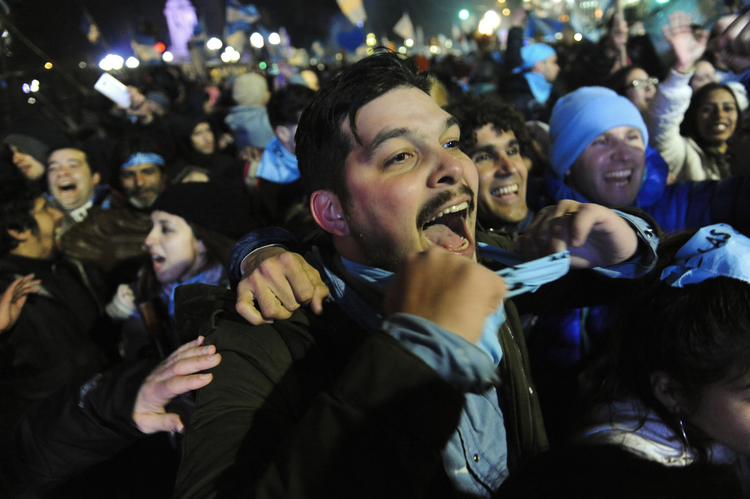 Note:  The story has been updated since it was originally posted, with additional reporting from David Agren of Catholic News Service.

BUENOS AIRES, Argentina (AP) — Argentina's Senate on Thursday morning rejected a bill to legalize elective abortion, a defeat for a grassroots movement that came closer than ever to achieving the decriminalization of the procedure in the homeland of Pope Francis.

Lawmakers debated for more than 15 hours and voted 38-31 against the measure that would have legalized abortion in the first 14 weeks of pregnancy. The decision could echo across Latin America, where anti-abortion forces remains strong even if the Roman Catholic Church has lost influence and moral authority due to secularization, an out-of-touch clerical caste and an avalanche of sex abuse scandals.

The Senate debate revealed deep divisions in Argentina, where support for decriminalizing abortion drew stronger support in Buenos Aires, the capital, than in the more conservative provinces. Observers attributed that difference to the bill being voted down in the Senate, which includes more representation from outlying areas.

"Everyone has time to express their viewpoints and be heard by legislators in a healthy democratic exercise. But the only ones that didn't have an opportunity de make themselves heard are the human beings that struggled to be born," Cardinal Mario Poli, Pope Francis' successor in Buenos Aires, said Aug. 8 in his homily at a what organizers called a "Mass for Life."

Lawmakers voted 38-31 against the measure that would have legalized abortion in the first 14 weeks of pregnancy.

In an acknowledgment that the church could be doing more to work with women, Cardinal Poli said, "We have done little to accompany the women when find themselves in tough situations, particularly when the (pregnancy) has is the result of rape or situations of extreme poverty."

In a statement after the vote, the bishops' conference said it was time to address the "new divisions developing between us ... through a renewed exercise of dialogue."

More than 75 percent of Argentines still consider themselves Catholic, but the opposition to the abortion bill also came from Protestant and evangelical congregations, prompting the bishops' conference to acknowledge that "ecumenical dialogue and inter-religious dialogue has grown at this time of joining forces to protect life."

Analysts in Argentina say church opposition to the abortion bill started somewhat quietly as the measure was not expected to pass the lower house. Pope Francis, a native of Argentina, also largely stayed on the sidelines, except for a strong denunciation of abortion in June. At the time he said, "Last century, the whole world was scandalized by what the Nazis did to purify the race. Today, we do the same thing but with white gloves."

Pope Francis this year denounced abortion as the "white glove" equivalent of the Nazi-era eugenics program.

"When the lower house result occurred, (the hierarchy) started to understand something similar could happen with the senators so the Argentine church and various movements and associations became frontally against the bill," said Jose Maria Poirier, publisher of the Catholic magazine Criterio.

"It's created tension" in the Argentine church "that the pope has not intervened directly," he added.

Argentine President Mauricio Macri had promised to sign the bill into law had it been approved, even though he is anti-abortion.. Observers said the relationship between the Catholic Church and Macri had deteriorated somewhat as the pope's statements on economic matters were not well received as the president tried to implement difficult economic reforms in recent months.

For long hours on Wednesday night and Thursday morning, thousands of supporters wearing green handkerchiefs that represent the effort to legalize abortion and opponents of the measure wearing light blue braved the heavy rain and cold temperatures in Argentina's winter to watch the debate on large screens set up outside Congress. The demonstrations were largely peaceful, but after the vote, small groups of protesters clashed with police, throwing firebombs and setting up flaming barricades. Police officers responded with tear gas.

In Argentina, abortion is only allowed in cases of rape and risks to a woman's health. Thousands of women, most of them poor, are hospitalized each year for complications linked due to unsafe abortions.

In Argentina, abortion is only allowed in cases of rape and risks to a woman's health.

Backers of the measure said legalizing abortion would save the life of many women. The Health Ministry estimated in 2016 that the country sees as many as half a million clandestine abortions each year, with dozens of women dying as a result. The Catholic Church and other groups opposed it, saying it violated Argentine law, which guarantees life from the moment of conception.

In recent years, Argentina has been at the forefront of social movements in the region. In 2010, it became the first country in Latin America to legalize same-sex marriage. More recently, the Ni Una Menos, or Not One Less, movement that was created in Argentina to fight violence against women has grown into a global phenomenon.

"There are positive points that have come out of this," said Buenos Aires provincial Gov. Maria Eugenia Vidal, referring to the large and largely peaceful rival demonstrations.

"Even when there are differing ways of thinking, there's a plaza in peace right now, with thousands of people defending their convictions," said

The issue pitted the Catholic Church against feminist groups, physicians against physicians.

The issue pitted the Catholic Church against feminist groups, physicians against physicians. While abortion rights activists waited for the decision under umbrellas, opponents gathered Wednesday night at a "Mass for Life" at the Metropolitan Cathedral, the church of Pope Francis during his tenure as the archbishop of Buenos Aires.

Activists estimate that 3,030 women in Argentina have died of illegal abortions since 1983."Let's recognize that we're facing a public health tragedy," said Magdalena Odarda, a senator for Rio Negro province.

"We're not deciding abortion yes or no. We're deciding abortion in a hospital, or illegal abortion, with a clothes hanger, or anything else that puts a woman in a humiliating, degrading situation — a real torture," she said.

Many women in Argentina use misoprostol to end first-trimester pregnancies. The drug is only sold under prescription, but for the poorest women the cost of the drug is out of reach.

For many of them, the methods used to induce an abortion include using an IV tube with a sharp wire clothes hanger or a knitting needle to try to break the amniotic sac inside the womb. Others drink herbs, insert dubious non-abortive pills in the vagina, or pump toxic mixtures, which can cause ulcers, hemorrhage and ultimately severe infections, and death.

For months, hundreds of doctors in Argentina had staged anti-abortion protests while feminists and other groups led even larger demonstrations in support of the measure, often wearing green that symbolizes the pro-abortion movement, or red cloaks and white bonnets like the characters from the novel-turned-TV series "The Handmaid's Tale."

International human rights and women's groups have been closely following the vote, and figures such as U.S. actress Susan Sarandon and "The Handmaid's Tale" author Margaret Atwood supported the pro-abortion cause.

Jose Miguel Vivanco, director for the Americas at Human Rights Watch, said that Argentina had a "historic opportunity" to protect the rights of women. Amnesty International told Argentine legislators that "the world is watching."

Demonstrations in support of the Argentine abortion measure were held Wednesday in Mexico, Brazil, Uruguay and Ecuador.

Efforts to ease or tighten abortion restrictions have repeatedly emerged across the region in recent years.

In neighboring Chile, the Constitutional Court last year upheld a measure that would end that country's absolute ban on abortions, permitting abortions when a woman's life is in danger, when a fetus is not viable and in cases of rape. Chile had been the last country in South America to ban abortion in all cases, though several nations in Central America still have absolute prohibitions.

"It's a shame that we were not able to reach a consensus because the problem will continue to exist exactly as it did before we began this debate," said former President Cristina Fernandez, who is an opposition senator.

"We need to make an effort to resolve this," she said.