Pope appeals for end of migrant shipwrecks, prays for dead 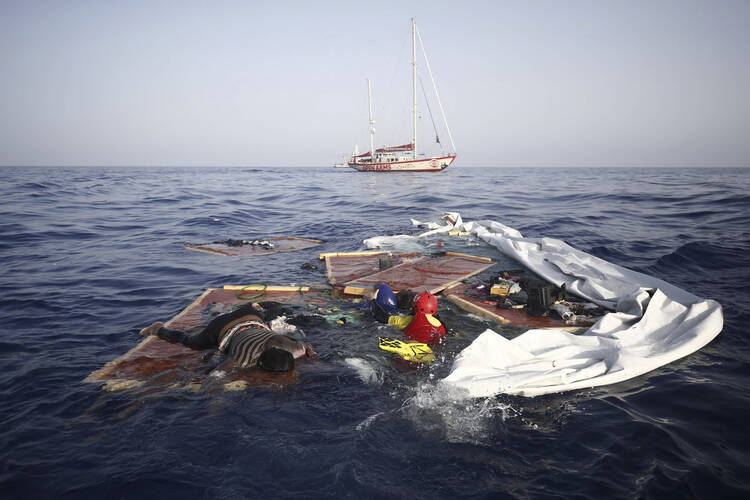 Rescue workers from the Proactiva Open Arms Spanish NGO retrieve the bodies of an adult and a child amid the drifting remains of a destroyed migrant boat off the Libyan coast, on Tuesday July 17, 2018. A migrant rescue aid group accused Libya's coast guard of abandoning three people in the Mediterranean Sea, including an adult woman and a toddler who died, after intercepting some 160 Europe-bound migrants on Monday near the shores of the northern African country. (Proactiva Open Arms via AP)

Francis in his traditional Sunday appearance to faithful in St. Peter's Square expressed sorrow over recent deaths in the Mediterranean Sea and assured victims' loved ones of his prayers.

He called on "the international community to act decisively and quickly so similar tragedies aren't repeated" and said the "safety, respect of rights and the dignity of all must be guaranteed."

How Many Migrants Have Been Killed?
From AP, CNS, RNS, Staff and other sources

Pope Calls for Peace in Libya and Syria
From AP, CNS, RNS, Staff and other sources

Far fewer migrants have arrived in Italy this year compared to the same period in 2017, but U.N. refugee officials say recent crossings have been deadlier.

With Italy's new populist government and Malta not allowing aid groups' boats to dock, rescued migrants lately have been stranded at sea for days.