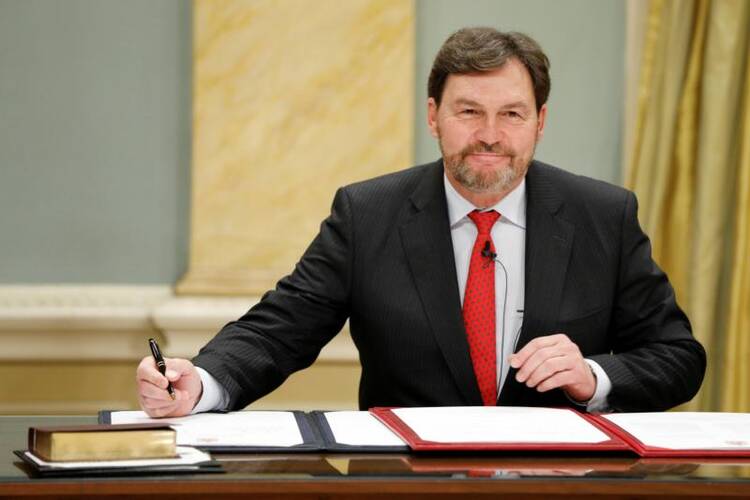 OTTAWA, Ontario (CNS) -- The Supreme Court has opened the door for discrimination based on a person's religious beliefs and moral values, Canadian bishops wrote in a frank rebuttal to a decision by Canada's highest court.

In the wake of a June 15 ruling that will likely scuttle a proposed law school at Trinity Western University, the bishops issued a statement that said they were " deeply concerned" and warned of "serious implications" and "negative repercussions" for individuals and institutions.

The statement comes after the court, in a 7-2 decision, upheld the right of law societies in British Columbia and Ontario to reject graduates of TWU's proposed law school. The law societies objected to the Evangelical Christian university's community covenant, which includes a requirement that staff, students and faculty abstain from sexual activity outside traditional marriage. The court deemed the covenant harmful to the equality and identity of non-heterosexual students.

"The decision by the court effectively means that provincial law societies can discriminate against lawyers on the basis of their religious affiliation and moral values," the Canadian Conference of Catholic Bishops said in a June 20 statement. "Furthermore, any organization is now at risk for its views on equality, diversity and inclusion if it depends on a regulatory body with a mandate to act in the 'public interest.'"

The CCCB warned that the court's interpretation of the public-interest mandate asserted by law societies "has serious implications for all private faith-based educational institutions and could have negative repercussions for religious charities and other organizations." The CCCB pointed out that Catholic beliefs are similar to those expressed in TWU's covenant.

The CCCB, an intervener in the case, had argued before the court about the risk of establishing "a hierarchy of rights" in which "the equality rights of the LGBTQ community, considered in the abstract, will trump the right to religious freedom and so undermine all ... protections" in the Canadian Charter of Rights and Freedoms.

At a news conference June 22, Chief Justice Richard Wagner was asked if the court viewed conscience rights and religious identity as less important than the identity of LGBT people.

"That's one interpretation and I respect it," he replied.

Wagner said context is crucial to interpreting the constitution and the Charter.

Wagner noted that in the 2015 Carter decision, which legalized euthanasia, the court reversed a decision from many years before, even though it was faced with the same facts and the same section of the Criminal Code.

In the wake of a June 15 ruling affecting the proposed law school at Trinity Western University, the bishops issued a statement that said they were " deeply concerned" and warned of "serious implications" and "negative repercussions" for individuals and institutions.

Douglas Farrow, professor of theology and Christian Thought at McGill University, expressed concern that what Wagner calls "evolving moral values" will become "for the rest of us devolving, indeed disappearing, rights."

"This is not the rule of law but rather the ruin of law," he said.

Constitutional lawyer and law professor Iain Benson, who now teaches in Australia, wrote on Facebook that the decision suggests, "law is in free-fall."

"You will see things now unwind. How quickly is hard to say, but the illiberal direction is clear," he wrote.

REAL Women of Canada also released a blistering assessment of the decision.

"The Supreme Court of Canada in its current decision, threw all circumspection and objectivity aside, and concluded in a 7-2 decision that tolerance of LGBTQ was required by TWU, but the LGBTQ community did not have to tolerate Christians' constitutional rights, which could be overridden.

"In short, there was no balancing of religious rights."

I completely agree with the Canadian Court. In fact, I believe that any school or business that believes it has the right to discriminate against people or employees based on non-criminal sexual activity in their personal life is overstepping their grounds as employers and businesses and are abusing the privacy rights of the people they are discriminating against and this should be illegal in all just societies. What business does a law school have in telling its professors who they can sleep with or fall in love with? That is akin to master/slave where the employer does not just have rule over their employee's office time or work hours but feels it has the right to rule over their employee's entire life.

Go Canada! Keep up your stand for the freedom and protection of individual people's rights and citizen's rights over the freedoms of any particular religion or business.

Some religious leaders believe democracy was meant to protect Christian Morality. It wasn't. Democracy was invented to protect every individual's rights to same treatment regardless of their religious beliefs. If all Canadian Law Schools are treated the same way for including such a privacy abusing covenant in their school's charter or practices than this school is not being discriminated against for being rejected for having this as a part of theirs. There is no need for any law school to include a mandate on the personal sex lives of its teacher's or student's in order to be a productive law school.