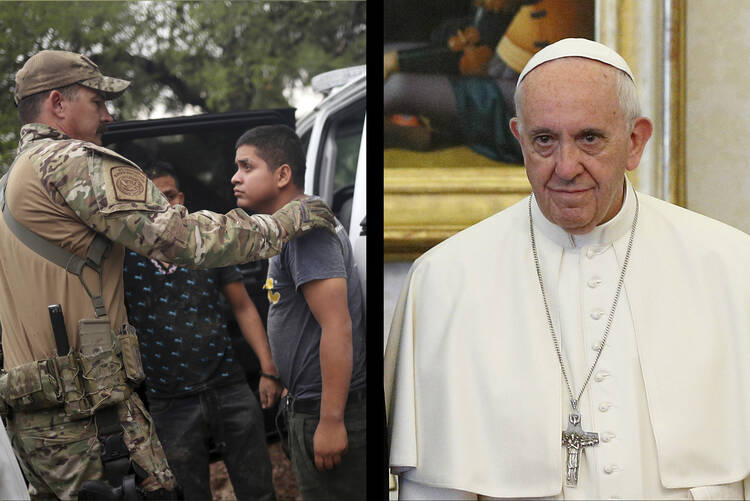 Pope Francis said he stands with the U.S. bishops who recently condemned the Trump administration's policy on immigration that has led to children being held in government shelters while their parents are sent to federal prisons.

On the first day of their June 13-14 spring assembly in Fort Lauderdale, Florida, Cardinal Daniel N. DiNardo of Galveston-Houston, president of the U.S. Conference of Catholic Bishops, read a statement on behalf of the bishops denouncing the government's zero-tolerance policy.

"Families are the foundational element of our society, and they must be able to stay together. While protecting our borders is important, we can and must do better as a government, and as a society, to find other ways to ensure that safety. Separating babies from their mothers is not the answer and is immoral," the statement said.

The political rise of populist movements in both the United States and in Europe has led to a severe crackdown on men, women and children trying to escape war, violence, poverty and persecution.

In Italy, Interior Minister Matteo Salvini banned the NGO rescue ship Aquarius, with more than 600 migrants aboard, to dock and has vowed to stop any foreign boats carrying rescued migrants into the country.

Pope Francis said the current wave of populist rhetoric against migrants was "creating psychosis" and that people seeking a better life should not be rejected.

Europe, he added, is facing a "great demographic winter" and, without immigration, the continent "will become empty."

"Some governments are working on it, and people have to be settled in the best possible way, but creating psychosis is not the cure," he said. "Populism does not resolve things. What resolves things is acceptance, study, prudence."

Does that mean the Pope is criticizing the Clintons and Obama? They are on record for advocating Trump's policy which is enforcing the law. The Pope must be really mad at Mexico because it is their policy that is causing this. About 20,000 children each year are separated from their parents in the United States because their parents are sent to prison. It has been happening for centuries.

But I am glad the Pope is endorsing free market capitalism.

It turns out the Pope did criticize the Obama administration. Somehow America, the magazine, neglected this in the article. Is this sloppy reporting? So are the bishops misrepresenting the situation or is there biased reporting going on?

My associate at work said "would any sane person go to a country with their kids if they thought the country would take their kids from them." If they did, then it was their fault and the people who encouraged them to do so.

She said Obama kept them in cages and kept them wrapped in aluminum foil.

Well, now that Trump has reversed himself 180°, big surprise, where does that leave the Defenders of Trump? All that argumentation and gaslighting for nothing. Do they feel abandoned when even tbeir Great Leader now agrees with their enemies? I would suggest that when Trump does or says anything, they give it some time to let the fluctuations and magnetic field reversals play out. This is not a guy who thinks things out ahead of time. He flies by the seat of his pants where his brains are.

A quote - "So, let’s get this straight. President Trump decided to prosecute all immigrants who cross the border illegally. The U.S. government would not prosecute children, so they were held separately from their parents. Democrats complain that families are being separated. Now, Trump reversed course, saying that children will be detained with their parents. So Democrats … complain that families will be kept together.”

Of course Obama did the same thing and Hillary agreed. There are photos of how Obama put children in football field size cages wrapped in aluminum foil. This whole issue has nothing to do with children. Why the phony outrage now? Oh there is an election coming up. The hypocrisy is amazing.