Why aren’t we paying attention to Puerto Rico? 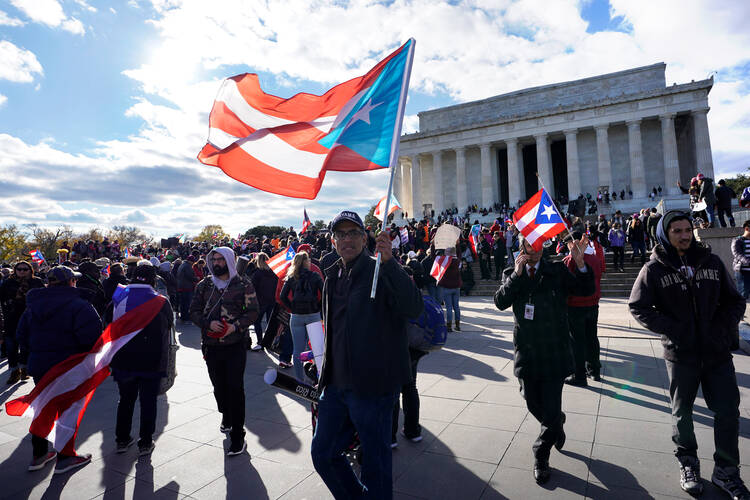 Members of the Hispanic Federation participate in a Unity March Nov. 19 in front of the Lincoln Memorial in Washington to highlight the ongoing humanitarian and natural disaster crisis in Puerto Rico. (CNS photo/Yuri Gripas, Reuters)

On May 1, police fired tear gas and pepper spray at thousands of U.S. citizens, including both students and teachers, who were protesting the sorry state of public education in their communities. But the demonstrations received little news coverage. This was sadly predictable. That is because the protests did not happen in Oklahoma or West Virginia but in Puerto Rico—still reeling from Hurricane Maria, which wiped out the island’s power infrastructure last summer and caused hundreds and perhaps thousands of deaths. (The number of casualties will probably never be known.)

Puerto Rico and its 3.4 million residents are now facing “austerity” measures imposed by an unelected oversight board created by Congress, as if cutting government services were the highest priority in one of the poorest places in the United States. No state with full representation in the U.S. Senate and House would be ignored in this way.

The Atlantic reports that the oversight board’s plan, approved in April, will slash benefits for public employees (including sick leave and vacation pay), reduce public pensions, impose work requirements for food assistance to families in poverty and cut funding for the University of Puerto Rico and for municipal governments. Because of the austerity measures, the university plans a tuition hike that will more than double the cost per academic credit, and Puerto Rico’s Department of Education plans to close 280 of about 1,100 public schools on the island this summer.

The demonstrations received little news coverage. That is because the protests did not happen in Oklahoma or West Virginia but in Puerto Rico.

Some belt-tightening in Puerto Rico is necessary. The island is roughly $72 billion in debt, thanks to an economic recession that has lasted more than a decade. Puerto Rico is also experiencing an exodus of residents to the U.S. mainland—not surprisingly, given the painfully slow recovery from Hurricane Maria, including yet another widespread power outage in April—that will necessitate at least some of the school closings.

But May Day protesters told reporters that they fear a death spiral because of the budget-cutting measures as middle-class families abandon the island in response to the cutbacks in government services. This is an outcome that would not be tolerated elsewhere in the United States. The cities of New Orleans and, more recently, Houston were not given up as lost after natural disasters; the city of Detroit received federal help after declaring bankruptcy in 2013. Puerto Rico, larger than any of those cities, is also just as much part of the family of the United States, even if it still has not yet been given a voice in Washington. The members of Congress with many constituents of Puerto Rican descent should take a leading role in ensuring that the oversight board take a long-range view toward bringing social and economic stability to the island. And the people of Puerto Rico should not feel they must take to the streets to get the attention of their compatriots. 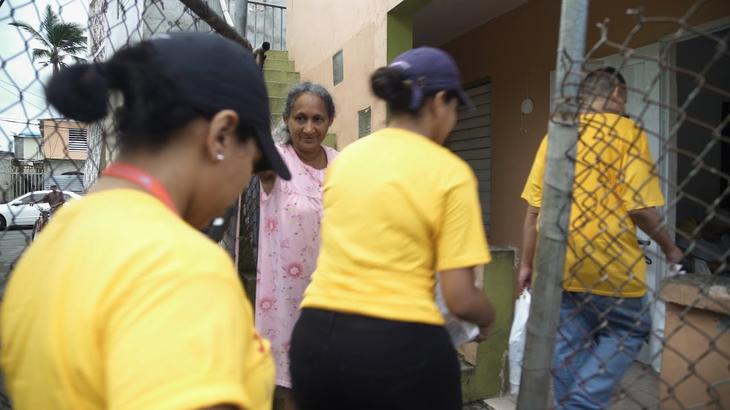 Brothers and sisters in Puerto Rico need to head on up to the mainland. I invite them to Florida, Alabama, Texas, Georgia, South Carolina North Carolina, and any red state that they can tolerate. Register to vote. Build their families. And when they head to the polls as U.S. citizens, remember those who tried to marginalize them.

"We" are not paying attention to Puerto Rico because the US--with the complicty of most American bishops and white Catholics--elected a racist president who does not even understand that Puerto is part of the country.

"Remove the log in thine own eye before you remove the splinter in mine." Matthew 7:5. Read it, you will be enlightened.

Your use of the word "elected" is indicative of your inability to get over the fact that Hillary lost the election. It's been almost a year and a half. Get over it, she lost.

Puerto Rico's debt per capita is almost $20,000, higher than the any State (NY worst at $17.5k per). The "debt fairy" didn't sprinkle this obligation upon the citizenry, they heaped it upon themselves with unsound financial practices. Complain of an unelected financial oversight board? -- welcome to the ranks of Detroit, Atlantic City, Orange County or Stockton CA.

Let me give you a clearer picture of the May 1 protest:
1- There were different groups of protestors, those who were demonstrating peacefully at the Capitol building and the others at the Financial Districts.
2- The protestors at the Financial district were the to destroy property, intimidate the press, and to harass and injure the police throwing rocks which they took in backpacks. They also destroyed the area's sidewalks to throw the pieces at police and bystanders.
3- The demostration at the Capitol ended without incident; the ones at the Financial district provoked the police. The police had agreed to retire if they stopped throwing rocks, as they were finalizing the discussion of the agreemen, the protestors continued throwing rocks and bottles filled with an unidentified liquid in them.
4- The police had to disperse the group with tear gas to prevent any further damage as last year some protestors began fires inside buildings where employees were at work.
5- These protestors caused many businesses to close during the whole day including Plaza Las America's, the largest mall in the Caribbean affecting thousands of direct and indirect jobs.
Now about Puerto Rico's debt:
1- It was caused by the last government on purpose to get a bailout from the US. When that didn't work, they promoted the Tittle III and the Fiscal Board until they got it. This was completely provoked by bad administration's one after the other using federal funds indiscriminately, with an extra big government, and not paying the debt.
All this situation is shameful for the majority of decent and responsible Puerto Ricans who are law abiding citizens and very proud Americans.