A simple way to break down social barriers: courtesy titles 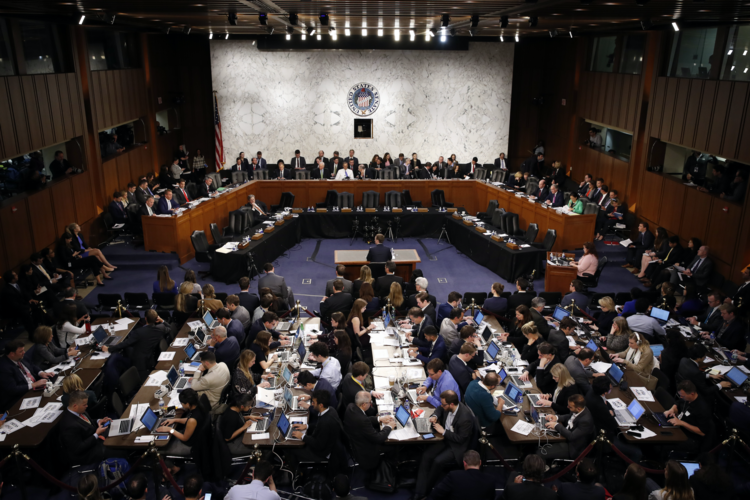 Facebook CEO Mark Zuckerberg testifies before a joint hearing of the Commerce and Judiciary Committees on Capitol Hill in Washington, on Tuesday, April 10, 2018, about the use of Facebook data to target American voters in the 2016 election. (AP Photo/Alex Brandon)

In mid-April Mark Zuckerberg, the founder and chief executive officer of Facebook, made a much-anticipated appearance on Capitol Hill, where he was questioned by members of Congress for more than 10 hours about the company’s improper handling of the personal data of Facebook users. Throughout the nationally televised inquisition, reported The Washington Post, both Democrats and Republicans “took turns swiping at Zuckerberg, holding him to ‘yes’ and ‘no’ questions and frequently cutting him off.”

Yet Mr. Zuckerberg largely kept his cool and displayed a sense of decorum that seemed almost anachronistic. Several commentators, in fact, said that Mr. Zuckerberg might have been too polite, or at least excessively deferential, because he prefaced every response with “Senator” or “Congressman.” Heather Schwedel of Slate wrote that “Zuckerberg sounded like he was overdoing it, at times coming off as not just a try-hard but pedantic too.” I did not hear it that way. His sense of decorum was a welcome respite from the freewheeling, indecorous rhetoric that passes for our public discourse.

His sense of decorum was a welcome respite from freewheeling, indecorous rhetoric.

Mr. Zuckerberg’s appearance certainly stands in sharp contrast with the squeamishly inappropriate performance of Michelle Wolf, the comedian who was center stage at this year’s annual dinner hosted by the White House Correspondents’ Association. There is a difference between funny and mean, which Ms. Wolf struggled to discern. While allowing for the fact that Mr. Zuckerberg and Ms. Wolf had different roles at different events, one delivering formal testimony, the other playing the part of court jester, Ms. Wolf’s performance by contrast showed just how coarse the contemporary political discourse can be. That is not entirely her fault, of course. As the conservative commentator William Kristol observed, while “the half hour performance of Michelle Wolf was vulgar, unseemly and damaging to our civic discourse,” the entire “three-year performance of candidate and president Donald Trump has been vulgar, unseemly and infinitely more damaging to our civic discourse.”

That much is true, but the lack of decorum in our public affairs is not entirely the fault of President Trump either. For years now, Americans have been jettisoning the formal, social customs that have traditionally governed our public interactions, tossing overboard the social niceties that were once thought to be essential to the smooth sailing of the ship of state. Our bemusement at Mr. Zuckerberg’s use of traditional honorifics and courtesy titles is evidence of this. And as with so much else, the justification for breaking down these social “barriers” is some seemingly egalitarian notion of inclusion.

The lack of decorum in our public affairs is not entirely the fault of President Trump.

Yet abandoning such social customs tends to benefit elites by reinforcing social barriers rather than removing them. I am loath, for example, to address people by their first name unless they have invited me to do so, or we have a familiar relationship that makes it acceptable to do so. In much of everyday life, however, we have done away with such formalities. And it is people in positions of power who have benefitted. Now, upon being introduced to Agnes Murphy of Ottumwa, Iowa, housewife and grandmother, most of us would feel perfectly entitled to call her Agnes from the get-go. But what about our doctors or the local judge? And if we met Pope Francis for the first time, would we think it was appropriate to address him as Jorge? If we met the president of the French Republic, would we think it was acceptable to call him Emmanuel? Certainly not. Most of us would probably address him as Mr. President, yet he would probably feel free to call us by our first names. This is levelling the playing field?

One could argue that we should use honorifics and courtesy titles in one case and not the other out of respect for the office the person occupies, rather than the person per se. Yet that is precisely my point: Basic social customs, including how we address each other, should account for what we owe each other as human beings, not what we think we owe someone by virtue of the power he or she possesses. Forms of address can change depending on the office someone inhabits, but the fundamental respect we owe each other, which is reflected in these formalities, does not change. It is not a coincidence, moreover, that our discourse became more coarsened just at the moment we collectively abandoned these formal social customs.

All of this is to say that America will continue to use honorifics and courtesy titles, whether it is “Mr. Trump,” “Mrs. Clinton” or “Sr. Margaret, a nun from Albany.” It does mean that our prose is occasionally cumbersome and that our authors sometimes have fewer words with which to work. But such formalities personalize the discourse in the only way that ultimately matters, by signaling the basic respect we owe people simply because they are persons. To put it another way: I think Mrs. Murphy of Ottumwa, Iowa, is owed the same mark of respect as the highest- ranking president or prelate. Even more, perhaps, but at least that much.

I agree with Fr. Malone's underscoring the importance of the courtesy of addressing others with the proper decorum. Courtesy, as we know, is derived from the proper conduct in the king's court. Graceful conduct and speech towards the dignity of the King and his court facilitates what has to be done and prevents embarrassments. In fact, persons who have developed courtesy in their lives create an atmosphere of comfort and freedom from the fear of humiliations. This in turn enables people to be themselves without fear of rejection.

Thank you Fr. Malone for a perceptive take on titles. I've always waged my own little private war asking people on the phone who I don't know to please use my last, not first name. Maybe a small effort but I think the use of first names goes deeper than even the need to be inclusive. Most progressive people have dreams of a man made Utopian society where we can dispense with the messiness of having to get to know someone, prove ourselves trustworthy and just jump to instant chumminess. It is like in Isaiah where the sheep lay down with the lions and get along. We will all they believe, strangers and friends alike, make a circle, join hands and sing Kumbaya. Allowing this to happen spreads the secularist fantasy so I politely resist this and ask for the tradition of last names for strangers.

Your editorial prowess exhibited great agility in standards strictness when applying the honorifics rule in the article about Mr Ryan and his holiness old what’s his name, as quoted here: “When asked about Francis’s critical words on capitalism, Mr. Ryan responded: ‘The guy is from Argentina’.”