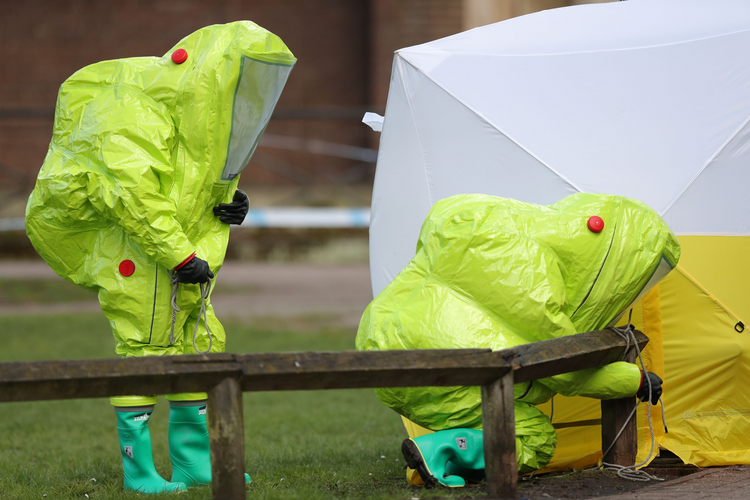 Personnel in hazmat suits work to secure a tent over the bench in Salisbury where former Russian double agent Sergei Skripal and his daughter Yulia were found critically ill by exposure to a nerve agent on March 4. (Andrew Matthews/PA via AP)

The Cold War may be history—mostly—but the stuff of John le Carré spy thrillers continues to resurface from time to time. Like a semi-dormant volcano, these incidents remind us that, under the surface, great power maneuverings and intrigue continue unseen, erupting sporadically to the surface in lethal displays.

Thus, the lovely English city of Salisbury and its magnificent 13th-century cathedral would not seem to have anything in common with the Glienicke Bridge (the Cold War’s “Bridge of Spies”), yet its genteel inhabitants found themselves abruptly cast as extras in a bizarre episode that has dominated headlines for many days. The poisoning of a former spy and his daughter, both still critically ill in hospital, led to a very Cold War sequence of claims and counterclaims, accusations and expulsions of diplomats and even to calls for England’s national soccer team to withdraw from the forthcoming World Cup in Russia.

The U.K. government has determined that the attack on Sergei Skripal, 66, and his daughter Yulia, 33, was by means of a nerve agent known as Novichok, first developed in Russia. The pair were found unconscious, slumped on a park bench in Salisbury (about 80 miles southwest of London), on March 4. Mr. Skripal, a retired colonel in the Russian military intelligence service, was jailed by Moscow in 2006 for secretly working for Britain’s MI6; he was then released and quietly allowed to come to the United Kingdom.

The U.K. government has determined that the attack was by means of a nerve agent known as Novichok, first developed in Russia.

A police officer, Detective Sergeant Nick Bailey, is also receiving treatment for exposure to the nerve agent after attending to the Skripals. Salisbury has been to all intents and purposes closed down to its inhabitants as hundreds of police and over 200 army specialists in protective garb search for signs of contamination and begin an exhaustive cleanup.

Attacks like one this have happened in Britain before. Some of them could have been pulled straight from the pages of a James Bond novel. The ingenious weapons used would have delighted that hero’s gadget provider, Major Boothroyd of Q Branch.

Georgi Markov was a real-life defector from the Soviet bloc who fled his native Bulgaria for London, where he worked for the BBC World Service and Radio Free Europe, propagandizing against the Bulgarian Stalinist regime. In 1978 Mr. Markov was assassinated as he walked across London’s Waterloo Bridge, felled by a pellet containing ricin fired into his leg from the engineered tip of an umbrella. The assassin, never identified, is thought to have been a member of the Bulgarian secret police working in collusion with the K.G.B.

Ten days later, there was another attempted assassination by the same means, this time unsuccessful, of a Soviet defector in a Paris Metro station. It is understood that the London-based Metropolitan Police might re-open the Markov case in the light of the Salisbury events.

Attacks like one this have happened in Britain before. Some of them could have been pulled straight from the pages of a James Bond novel.

And long after the end of the Cold War, London witnessed the murder of Russian dissident Alexander Litvinenko, a former K.G.B. officer who had been granted asylum in Britain. Police investigators concluded that acute radiation induced by polonium-210 brought about Mr. Litvinenko’s demise in 2006. He suffered a lingering death during which he accused Russian President Vladimir Putin of directly masterminding his murder.

This incident led to serious diplomatic tensions between the Russian and British states. Other Russian defectors and dissidents tried to confirm the direct link to the innermost Kremlin, suggesting that Mr. Litvinenko was punished as a traitor, his fate a warning to would-be turncoats. Buzzfeed News has published an investigation suggesting that as many as 14 murders on British soil are traceable to Moscow—and that the British government, concerned about its worsening relationship with Russia, has tried to keep these quiet.

A characteristic of real-life, Cold War melodramas used to be that such incidents would provoke fairly standard political moves, like mutual expulsions of embassy staffers implausibly described as “cultural attachés” or “sporting liaison officers.” Pre-cooked expressions of outrage from each country’s foreign ministry would be quickly forthcoming, but the whole affair would be over within weeks without major risk of escalation. The biggest difference between then and now, arguably, was that we knew they did it and they knew that we knew, and each side knew that the other constantly did it, and so on.

Now the situation is different and much more frightening. Balancing forces are no longer apparent to keep conflict in check. Russian President Vladimir Putin has neutralized any real political opposition in his country, but he wants to look strong to the populace. Long before the Soviet era, the huge but still vulnerable Russia has always wanted to see strength in its leaders.

Will the Old Russia allow a New Russia to emerge?
Raymond A. Schroth, S.J.

There are signs that Mr. Putin will seek to demonstrate his strength, renewed by his re-election on March 18, in ever-more destabilizing ways here and elsewhere. London is said to be awash with Russian money, and it is common to hear the language spoken on the street and on public transit. But despite the public outrage generated by this latest attack, Labour Party leader Jeremy Corbyn has issued a controversial call for a cautious response. Surely few wish a return to a new Cold War, but contemporary Russia has clearly become a dangerous adversary again.

Salisbury Cathedral contains the best of the four surviving copies of the Magna Carta and famously stands on foundations only a meter or so deep, owing to the high subsurface water level of its glorious surrounding meadows (wonderfully painted by John Constable). Its stunning spire, the finest extant example of the Early English style, has an estimated weight of 6,500 tons.

The great Christopher Wren had to be sent for in the 17th century to design crossbeams, still effective but invisible under a false ceiling, to prevent the collapse of the whole edifice. You can still see how the supporting pillars bend under the stress.

The gruesome assassination that just took place in the spire’s shadow could begin a collapse of its own; one that would scatter debris far and wide and threaten far more than the magnificent spire of this great cathedral.

Thank God for Trump on Russia. He is promoting all sorts of ways to stymie Russia and Putin. It is an essential part of his agenda.

The main one is his promotion of new energy sources which lowers the price of oil and gas which weakens the main driver of the Russian economy. Hug a fracker for what they have done to frustrate Russia, more than all the military in Europe. Oh wait, does Europe have any military of consequence?