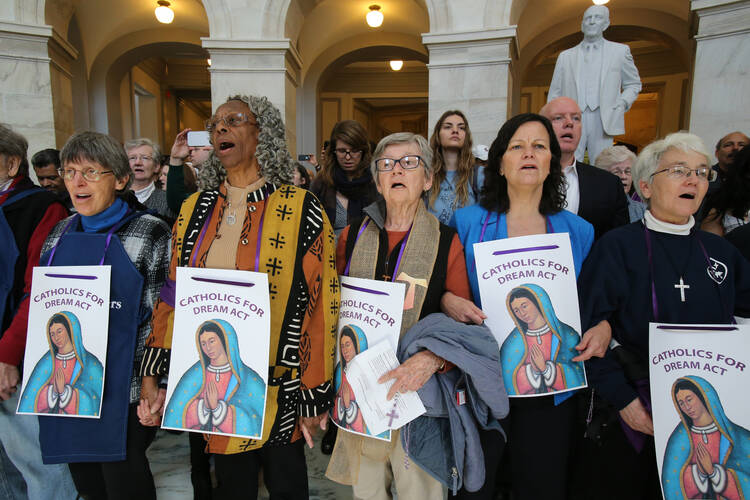 Sisters of Mercy and others pray inside the Russell Senate Office Building in Washington Feb. 27 during a "Catholic Day of Action for Dreamers" protest (CNS photo/Bob Roller).

WASHINGTON (CNS) -- Dozens of Catholics, including men and women religious, were arrested near the U.S. Capitol Feb. 27 in the rotunda of a Senate building in Washington as they called on lawmakers to help young undocumented adults brought to the U.S. as minors obtain some sort of permanent legal status.

Some of them sang and prayed, and many of them—such as Dominican Sister Elise Garcia and Mercy Sister JoAnn Persch—said they had no option but to participate in the act of civil disobedience to speak out against the failure of Congress and the Trump administration to help the young adults.

"I have never been arrested in my life, but with the blessing of my community, I am joining with two dozen other Catholic sisters and Catholic allies to risk arrest today as an act of solidarity with our nation's wonderful, beautiful Dreamers," said Sister Garcia. "To our leaders in Congress and in the White House, I say 'arrest a nun, not a Dreamer.'"

She said she was there to support those like Daniel Neri, a Catholic from Indiana who was present at the event and would benefit from any legislation to help the 1.8 million estimated young adults in the country facing an uncertain future.

"What are we doing to the body of Christ when are hurting families? When we are hurting people?" he asked.

He also said, he wanted people to know that "we are not criminals, we are not rapists, we are good people."

Young adults called "Dreamers"—a reference to the DREAM Act, one of the proposed pieces of legislation that could help them stay in the country legally—have to go through extensive background checks, he said, and they wouldn't pass those checks if they were troublemakers.

Thomas Reese, S.J., said he was representing Jesuits from the West Coast and other Jesuits, who know exactly who "Dreamers" are.

Pointing to the U.S. Capitol building, where lawmakers gather, he said, "it is time for the people who work in that building to realize that this is a moral issue. It is a justice issue, and the political gamesmanship must stop."

Sister Persch said she was there, too, to support Dreamers. She took part in what was billed a "Catholic Day of Action With Dreamers," organized by the PICO National Network, a faith-based community organization based in California, largely out of frustration, she said.

"My prayer, my work for comprehensive immigration reform has had no impact on this administration," she said. "I stand with Dreamers now at this moment of truth, which to me is a moral issue. When these traditional strategies we have used have no impact, we have to move to action that could involve taking a risk to disrupt this unjust system in some way."

And if that meant being arrested, she was willing to do so, she said.

"As a woman of faith, I am called to be wise ... courageous, a prophetic voice," she said. "That is a challenge to every person who says they are a Catholic, a Christian, a person of faith. And this applies to Paul Ryan as well as all those in Congress."

House Speaker Ryan, R-Wisconsin, is Catholic and many said they took issue with what they see as his lack of action on several issues involving immigrants. At various moments, including one near the U.S. Capitol, the crowd chanted, "Paul, Paul, why do you persecute me?" referring to the speaker.

In the rotunda, many of those who risked arrest, began by joining hands, singing hymns and praying "Hail Mary." They included Father Reese, along with Sisters Garcia and Persch. U.S. Capitol Police began warning them repeatedly to stop or be arrested. Of the 30 or 40 arrests, eight were Mercy Sisters.

Bishop Stowe extended his hands in the air and said: "We stand with the Dreamers, we are one with the Dreamers. And now I ask God's blessing upon those who are acting in civil disobedience, part of a long-standing tradition of not supporting unjust laws."

Shortly after, they were asked to put their hands behind and were placed in plastic handcuffs and led away, some in prayer, some singing. They were charged with disorderly conduct, crowding, incommoding and obstruction. By 4 p.m. (local time), they had all been released.

Just as those who were arrested at the Capitol were stepping out of out their comfort zones, so, too, the young adults they were advocating for are facing an even greater discomfort, the bishop said, as they face their greatest moment of uncertainty.

I commend the Sisters of Mercy and other men religious and Catholics who engaged in civil disobedience in a peaceful manner. My experience with immigrants is somewhat different from those who entered our nation illegally but who in many cases have worked in our nation for years. When I worked in a group home for disabled men, several of the staff were immigrants from Liberia, who had fled to the United States from a brutal civil war seeking a better life. Perhaps their experience wasn't so different from the young adults known as Dreamers. I agree with Father Reese that those who were arrested weren't only engaged in a political protest, but that there is a moral dimension to their act. Some years ago, I took part in a "rescue" (sit in) outside an abortion center in suburban Philadelphia. The rescue was peaceful, and several hundred men and women took part to at least put a temporary halt to the violence of abortion. Fortunately, since the late 1980's when I participated in the "rescue", the number of clinics which kill innocent unborn human beings has significantly declined. However, Planned Parenthood, although they provide some legitimate healthcare services, performs over 300,000 abortions every year in our nation, more than any other organization. Unfortunately, I believe that Planned Parenthood is increasing the number of unborn lives killed at their clinics. The agency is also very politically active, and opposes any attempts to pass and implement laws to protect the unborn as well as inform women about the reality of abortion, and the existence of many pro-life alternative -to-abortion groups.

Again, we have the the hypocrites. Why, of course Fr. Reese and his buddies know who the Dreamers are. This is why, as a christian act of solidarity, they'll help them. It's not Christian at all, just people with power helping their friends (and maintaining enrollment; If Dreamers were Methodist we wouldn't be having this conversation). Believe me, if Dreamers were not people of Potential Status (read- high income levels), some of these Jesuits would not be wringing hands in anguish. It horrifies me when I hear "...men and woman for others..." because there is almost always an asterisk. "Men and Woman for (*popular hot button cause of the day*)" is much more the reality especially if earthly glory can be obtained ( ya wanna see my arrest record?). Again, I say, too darn bad about you kids in the inner cities and poor rural areas, there's no need to get arrested for you, huh? You have to learn to market yourselves to some in the Jesuit hierarchy like the Dreamers have. Then, and only then, will such notice be given. Imagine, Christian love and support solely on the basis of identity politics, and Jesus continues to weep.

It never amazes me how ignorance drives this country. You have no idea who dreamers are and yet you make wild assumptions and call other hypocrites. Educate yourself..

I do feel for these poor dreamers and I support their cause. However, what irks me about this great stand of Catholics is that, unlike myself, many Catholics voted these bozos Trump and Ryan into office. It is not like they hid their agendas and most bishops supported Trump Over Clinton. Our Catholic misogyny, in not wanting a pro woman female president, gained us this nasty Nazi supporting leader and then you complain about him. Only I am pretty sure you would all vote against Clinton and pick Trump again if you had the chance. And you would put Ryan into office again too. Trump can't be a problem without Catholic votes. Dear Bishops stop pushing horror show type politicians or stop complaining about the horrors they do once they get in - pick one or the other!

These sisters are the real leaders moving the Church forward. And yet they are barred from institutional leadership roles. The Church really needs to move into the 21st century.