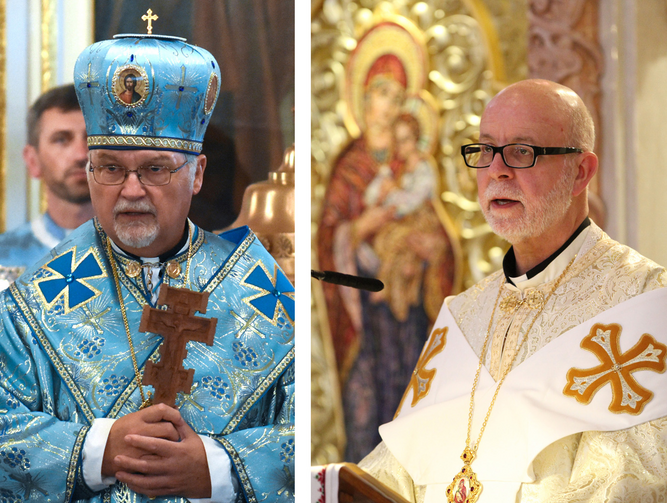 Archbishop Stefan Soroka of Philadelphia, metropolitan of U.S. Ukrainian Catholics, and Bishop Paul P. Chomnycky of Stamford, Conn., are pictured in a composite photo. The two Ukrainian Catholic prelates have placed a culinary wager on the outcome of the Feb. 4 Super Bowl LII in Minneapolis. (CNS photos/Jacqueline Dorme, Republican-Herald and Gregory A. Shemitz)

It is a common joke—or maybe more serious than that—to compare sports to religion, professional sports particularly with their coaches as high priests and players as ordinary clergy performing a sacred ritual for the inspiration of the high-paying faithful. Super Bowl week is the holiest of sports weeks, and the Sunday game the holiest of Sabbaths.

Early in the week America reported that two official religious figures had gotten into the game. Boston’s Cardinal Seán P. O'Malley, supporting his team of Patriots, had exchanged bets with Philadelphia’s Archbishop Charles J. Chaput, hoping for a win for his Eagles. The prelates’ bet was appropriately modest and appropriately altruistic. The loser would donate $100 to the winner’s diocesan charity.

Soon after, Crux reported that two other prelates weighed in. Archbishop Stefan Soroka of Philadelphia, who is the metropolitan of the Ukrainian Catholics in the United States and supports his hometown Eagles, has challenged Bishop Paul P. Chomnycky of Stamford, Conn., supporting his New England team. The wager is for the loser to host a lunch for his opponent’s chancery staffs featuring local favorite food—Philly cheesesteaks and Boston cream pie, among other dishes.

Now word is out that Boston College High and Philadelphia’s St. Joseph Prep have entered the fray. Here the stakes are more academic: If the New England Patriots prevail today, St. Joe’s students will stage a reenactment of the Boston Tea Party. If the Eagles win, the Boston College High men will reenact the signing of the Declaration of Independence.

A lot of hopes are riding high today. But there really will not be any losers. The church leaders will have their hundred-dollar payoffs go to a worthy charity or will provide a delicious lunch for their counterparts. And the high school men will show their prowess at staging history. Everyone wins.