What are President Trump’s best and worst policies? Our readers respond

What are President Trump’s best and worst policies? Our readers respond 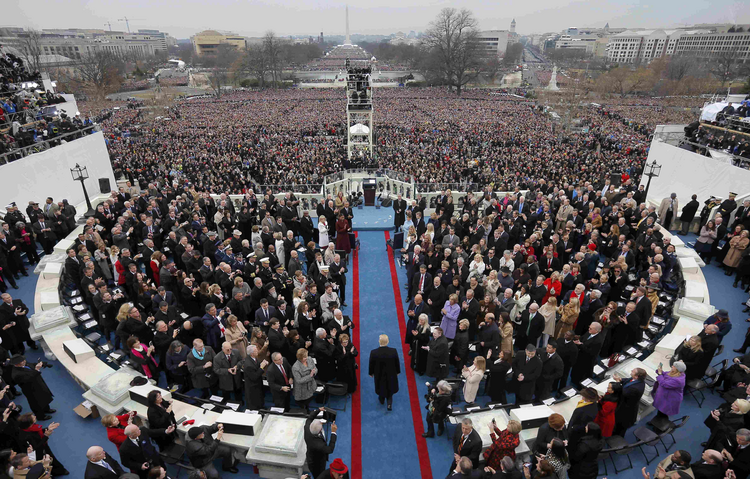 U.S. President-elect Donald Trump is applauded as he arrives for his Jan. 20, 2017 swearing-in as the country's 45th president at the U.S. Capitol in Washington. (CNS photo/Rick Wilking, Reuters)

Now that President Trump has been in office for a year, America asked readers to reflect on his best and worst policies.

Although many readers were dismayed by being asked to pick a “best” policy, 31 percent of respondents told America that restrictions on abortion were Mr. Trump’s best policy. “This is one of his only policies that is pro-life,” wrote Jean Sanifer of St. Louis. “Cutting health care, immigration bans, withdrawing from the Paris climate agreement and even ending the ban on importing elephant trophies—almost every policy he has enacted shows a lack of respect for the poor and for life itself.” Mat Wilson of Montgomery, Tex., echoed this point: “I want an end to abortion, but Trump isn’t allowing for appropriate accommodations or benefits to help with postnatal and prenatal care, which are necessary to the health and wellbeing of mother and child.”

When asked to choose Mr. Trump’s worst policy, 31 percent of respondents named his policies on immigration. One reader from Philadelphia told America that Mr. Trump’s immigration policies “stem from his lack of respect for basic human rights and arise from the most egregious racism.” Sebastian Belloni of Gaithersburg, Md., concurred: “Trump’s immigration policies are racist, inhumane, and anti-family. He is splitting up families, targeting religious and ethnic minorities, and scapegoating nonwhite aliens. They do not display the compassion toward others that Jesus challenges us all to strive for.”

After immigration, respondents told America that Mr. Trump’s worst policies were his handling of foreign affairs, such as the U.S.-North Korea relationship, the campaign against ISIS and declaring Jerusalem the capital of Israel (18 percent); and cutting back federal regulations (12 percent). 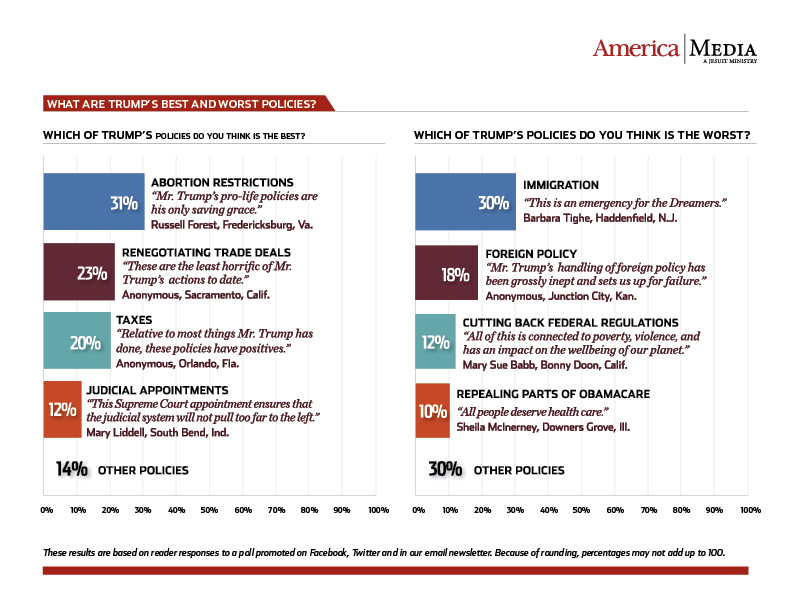 I largely agree with America readers views about President Trump's best and worst policies. Since I believe the right to life is the fundamental human right, I believe Trump's efforts to end the violence of legal abortion are of crucial importance. However, it's very mistaken to cut prenatal and maternity care, as well as to eliminate healthcare for many Americans. Immigrants should be welcomed into our nation, and our lawmakers must find a reasonable way to grant citizenship to undocumented immigrants; after all, with the exception of Native Americans, we're all descendants of immigrants. Our government should also ensure that laws and regulations protect our environment. I also believe that earnest diplomatic efforts should be pursued before a war is fought to resolve a conflict, and nuclear weapons should never be used. Our government (as well as individuals, charities, and houses of worship) should provide assistance to the millions. of Americans in need. Among others, these include people who are disabled, homeless, senior ccitizens, veterans, seriously ill, those addicted to drugs, the mentally ill, victims of human trafficking, and people of any age who are abused in any way. As a retired Special Education teacher, I know the importance of education, so I think public education should be well-funded. Also, our government should provide humanitarian assistance to foreign nations in need; both for moral reasons and for the practical reason to encourage goodwill. I disagree with our recognition of Jerusalem as the capital of Israel. I am a strong supporter of Israel, the only democracy in the Middle East. However, I believe that Israel should withdraw as soon as is feasible from occupied territories, but the Arab world must clearly recognize the right of Israel to exist. I do support the creation of a Palestinian state, once Muslims have renounced terrorism and agreed to live in peace with Israel. Also, taxes should be levied in such a way that the poor and middle class aren't treated unfairly. I believe that wealthy people wouldn't be harmed if their taxes were increased. Also,, taxes should be increased on both tobacco products and alcohol, both to discourage their use, and to fund treatment/rehabilitation centers as well as to reduce government debt. Finally, although I'm gay and have had sex with men in the past, I 'v e regretted my actions and have received forgiveness through the Sacrament of Reconciliation. Therefore, although I certainly believe that gay people should be treated with respect, I oppose gay marriage.

This article also appeared in print, under the headline “What are President Trump’s best and worst policies?,” in the February 5, 2018, issue.